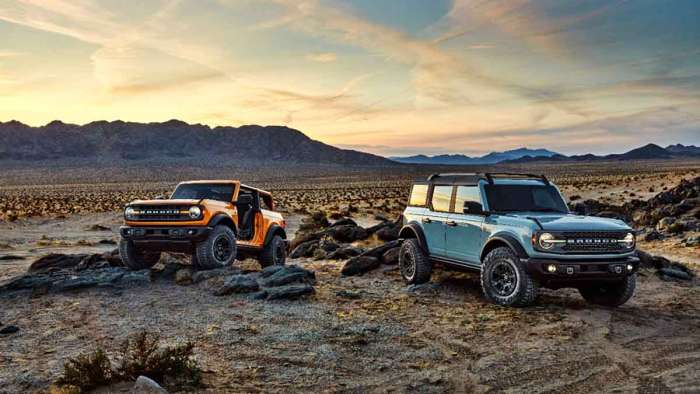 2021 Ford Bronco Order Conversions Start Today, But Many Won’t Get Their Two or Four-Door Bronco Until 2022

In order to get a 2021 Ford Bronco it will take the right build with the right dealer at the right time. Meanwhile Ford Motor Company encourages transparency from dealers as they communicate with their customers about the purchase of their two-door and four-door Broncos.
Advertisement

And that is a point of frustration for many.

So when can those who “ordered” their Broncos as far back as last summer really expect to take delivery? Well to figure that requires a lot of guess work and ideally requires transparency from Ford dealers. 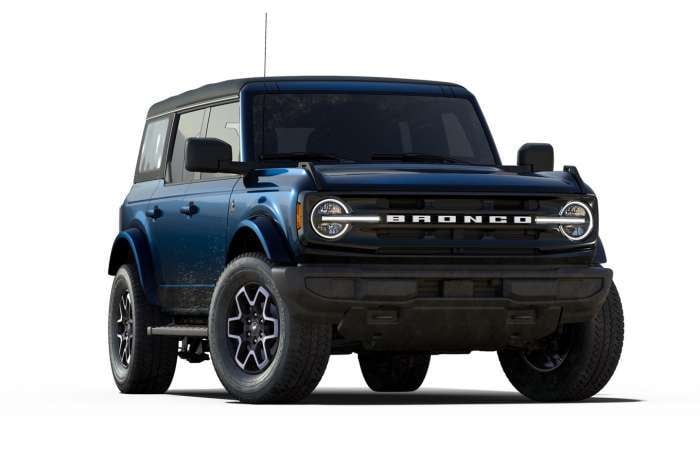 What Is The Last Date To Convert An Order For a 2021 Ford Bronco?
This is a clear cut, easy answer. The drop dead, no looking back date is March 19. Any order that does not converted by then risks any chance of getting a 2021 Bronco. I even asked Jiyan K. Cadiz, Ford’s North American Icon Communications and Media Relations Manager about that and he said: “If a reservation holder does not convert by March 19, there is a high likelihood that they could get a 2022 model year, but there is still a chance the customer would be within the 2021 model year window.”

According to the excellent Bronco enthusiast forum bronco6g.com there’s more to it than that. And that’s where the frustration starts. 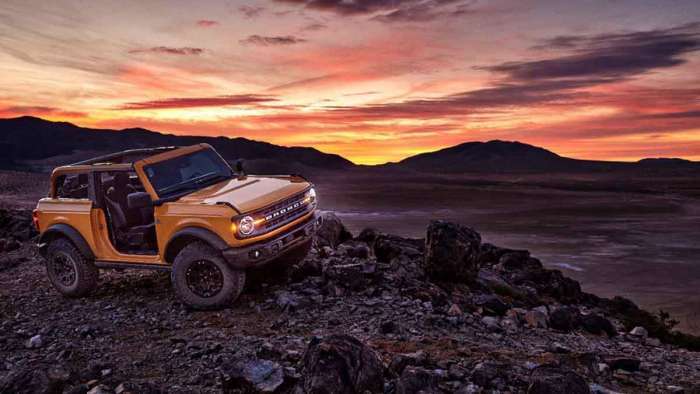 Can I Still Get a 2021 Model Year Two-Door or Four-Door Bronco?
The answer to this is yes, but again “it’s complicated.”

Let’s look at the chart published by bronco6g.com to decipher things. It all refers back to the inside the line, on the line and outside the line I referred to earlier.

According to the chart (see below for the entire chart) provided by a Ford dealer, those earliest of pre-orders with the earliest dates are “inside the line”. That means that if they have an early timestamp and their dealer has enough allocated Broncos coming their way those people have the highest likelihood of getting 2021 Ford Bronco this summer.

But it depends on what was ordered as some builds are already known to be delayed. So many are forced to be patient and wait for the build they want, which would mean perhaps waiting until 2022 for their ideal Bronco, or compromising on certain trims or engines and getting their order converted.

Those who are considered to be on the on the line have a 50/50 chance of getting their Bronco this year. Those would be the slightly later timestamp dates and also working with dealers who might have smaller allocations. Think of this like the NCAA basketball tournament and teams that are on the bubble.

For those who were much later to the reservation system and have later timestamps it’s not looking good for them. They are categorized as outside the line and according the chart, dealers are advised to be forthright and tell them it’s likely they won’t get their Bronco until MY 2022.

Cadiz told me, “In May 2021, customers with orders will receive details about their estimated delivery timing based on reservation timestamp, vehicle model and configuration selected, as well as the number of Broncos the dealer will receive.” 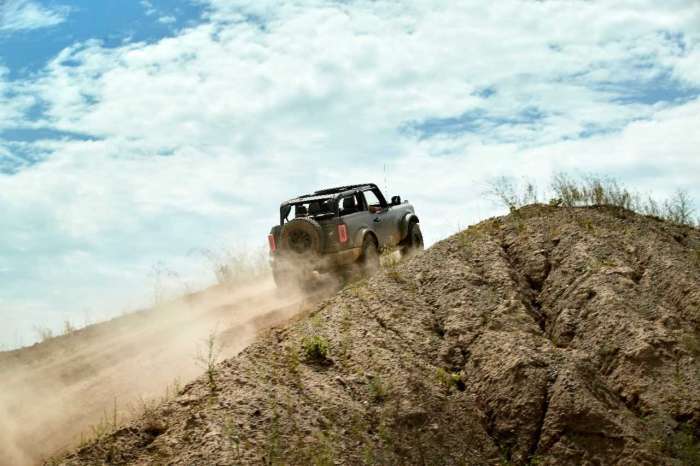 Dealer Allocations For 2021 Ford Bronco
Much of the frustration stems from a lack of transparency with Ford dealers and those who placed orders.

Many of these passionate enthusiasts surged to the order system, to the point where, if you recall, the order website crashed last summer. It was a good problem to have for Ford, but it was still a problem.

So with a surge and near scrum for getting the earl timestamps and getting the special Limited Edition models, some of these enthusiasts (rightfully) feel entitled to be the first ones to get their Broncos, but that just might not happen.

Cadiz did offer some advice to Ford dealers. “We encourage dealers to share their initial allocation forecasts, along with where their customer rank based on timestamp.”

In other words, Ford wants their dealers to be transparent with this process. And therein lies a major crux of the frustrations. Judging from comments on the 6g forum there’s a lack of communication from the dealers about allocations and also a lack of trust.

Some fear that allocations will get sold to higher bidders and others fear that if they do wait until 2022, that the price will go up.

Ford has a situation on their hands regarding the all-too-important two-door and four-door Bronco. Ford lists this as an icon vehicle and it really is. Enthusiasts waited decades for the Bronco’s triumphant return. Then with several teases it seemed like another decade went by teasing and hinting at a Bronco.

Then finally Ford did an amazing job of revealing the Bronco to much fanfare and praise. Only to tease enthusiasts further and whet their appetite enough. Then with Covid and a pandemic further delays became unavoidable.

Now, as the orders can be converted reality is so close to many and they feel left in the dark or that they will have no choice to wait further. My advice to Ford, and I relayed this to Jiyad is to be transparent with what trims, engines, options are likely delayed, but to also make sure that the Ford dealers remain forthright with their communications to the Bronco enthusiasts.

They are owed that. They’ve waited a long time. Ford already did a good thing by sending a letter when there would be a known delay and offering $300 in accessories. But perhaps more is needed. For sure Ford should not dismiss this and pay very close attention to this situation.

Leave me your comment. I try to be the voice of the consumer and am on the side of the passionate Bronco enthusiasts.

Matt Muraski wrote on January 21, 2021 - 7:01am Permalink
Another thing you should mention, 2021 is a short production year, only about 60,000 units that will start May and end in Dec 2021, Dec 2021 they will start to produce 2022’s, more options, colors ect. 2022 MY will be a full production year at about 120,000 units. These totals are approx all the preorders. That’s about as transparent as every dealer, Ford, journalists and customers need to understand. This is all good news for everyone especially in regards to retaining value and limiting depreciation. The ole supply and demand. This is all subject to COVID’s continued demise. If shutdowns come back, throw all this out the window. Thanks for listening, just my 2 cents.. I am a dealer manager who demands transparency from my employees to our customers about The Whole process and pricing.
Norris wrote on January 21, 2021 - 9:18am Permalink
My son and DIL have the money to buy 'the best next thing' when it comes to cars. They reserved the latest model Tesla a few years back then got tired of the wait and the run around so they cancelled the order. Then last summer as soon as the new Bronco was available for reservation that's what they did. I'm not sure which model (middle of the pack) or the reservation #, but my DIL just heard the other day from the dealer that she'd have to wait until 2022 to get her vehicle. She's now about ready to give up and stick with a new VW which is what she has now. Too bad, she really wants that Bronco.
amccoy wrote on January 21, 2021 - 1:20pm Permalink
Does my selected dealership convert my reservation to an order, or do we have to do it ourselves on Ford.com? Because I have tried to click on the Lets Get Started tab on the Heres How It Works 1,2,3 page 1 being a reservation, 2 being place order and nothing happens. Any response will help, my dealership doesnt seem to understand. They say they can order the sport for me, but I have to order the 2 door.
Jimmy Dinsmore wrote on January 22, 2021 - 8:30am Permalink
Your dealer is supposed to convert the order, but first you have to work out the payment plan, finances. If you haven't done that, your order is not placed. I'd press the issue with your dealer.
FE Bronco wrote on January 27, 2021 - 8:42am Permalink
Has anyone had their dealer come back wanting $5K more over the MSRP to put in their order for a First Edition? Appears that some dealers are trying to take advantage of the supply/demand issue at the patiently waiting customers dismay. What is recommended to do in this situation?
Jimmy Dinsmore wrote on January 27, 2021 - 10:28am Permalink
Some have switched their order to Granger from a dealer. I heard they were operating cleanly. I'd recommend going back to your dealer and letting him know you will find a different provider, like Granger that won't ask for $5K over. See how that works. Let me know.