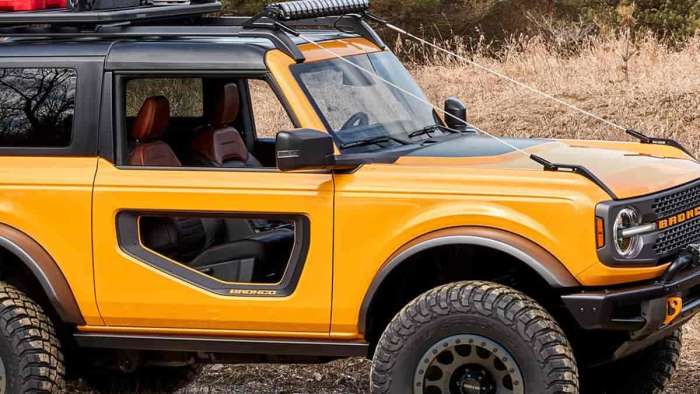 Bronco Mileage Ratings Leaked, Average Is In The 17 to 21 Range

What a time to have your mileage figures leaked for the world to read. Last week, the mileage averages for the Ford Bronco line were leaked to Bronco Nation, just in time for hackers to shut down a major oil pipeline.
Advertisement

Of all times to release the fuel economy ratings for a popular new series of vehicles, the leaked release figures of the Ford Bronco's fuel numbers couldn't have come at a worse time.

Let's face it. The numbers are mind-numbingly average. Indeed, they are about what you would expect from 4X4 SUVs, even though the engine sizes themselves suggest that the fuel economy numbers for the Bronco and its little sibling, the Bronco Sport, should be higher than they are.

We'll get to the actual numbers, which were discussed by Laura #1976 in a Bronco Nation release late last week, in a moment. Let's look, for the moment, at the environment into which the figures were released.

First, in a huge coincidence, the Bronco fuel economy ratings appeared the same week a group of Russian hackers held the Colonial Pipeline for ransom by hacking the fuel supplier's computer system. The Colonial pipeline brings all fuel types – gasoline, diesel, aviation – from the refineries in the South to the Northeast. For six days last week, nothing moved through the pipeline. It took Washington's efforts, working with the fuel transport company, to get things moving again.

Indeed, it took until this weekend to ensure that fuel was moving at 100 percent. During the shutdown, motorists in the Southeast panicked as gasoline supplies dried up. It led to fuel lines that were reminiscent of the gasoline shortages of the 1970s. It also led to panicky motorists engaging in poor behaviors such as gas hoarding in open containers and fights. Gasoline prices also spiked about $3- to $4-a-gallon, for the first time in years. It also demonstrated just how vulnerable our fuel infrastructure is to hackers.

News reports also said that the hacker group that made the ransomware attack, DarkSide, had disbanded after discovering that it no longer had the unfettered access to the Colonial pipeline computer system it had hacked. The ransomware attack did, indeed, produce a ransom that got things working again. Various news outlets reported that Colonial paid as much as $5 million to regain control of its computer system and, ultimately, the pipeline.

The mileage ratings also came as there were other fears of fuel shortages that helped to keep prices up, even after the fuel had begun to flow again. A shortage of fuel truck drivers caused these fears. It is funny that even with fuel-farm tank-topping fuel available, there aren't enough drivers to move the fuel to local gas stations. It is a paradox that there is fuel available, but you still can't get it. As a result, fuel prices have stayed up.

With this environment as background, the Bronco fuel economy ratings leaked. The ratings were, as noted, mind-numbingly average, ranging from 17 to 21 miles per gallon. Bronco Nation noted that the reason for the very average fuel economy ratings was weight. To put it bluntly, they noted that "Ford vehicles are notoriously heavy and the Bronco, built on the Ranger platform, is no exception."

My colleague Jimmy Dinsmore led a petition camaign to get at least one Bronco model with a manual.

Owners of the "2.7-liter six-cylinder engine, which can only be paired with the 10-speed automatic transmission, can expect to see a combined 19 miles per gallon."

As has been noted by Torque News, there is a manual transmission, but it is only available with the Sasquatch package. It will "be introduced later; the fuel economy will likely follow the same pattern as the 2.3-liter automatic with [the] Sasquatch." Senior Torque News Reporter Jimmy Dinsmore was successful in convincing Ford to add a manual to one Bronco package.

To say that Bronco Nation is dissatisfied with the mileage figures is, well, putting it a bit mildly. It calls the "Bronco numbers … pretty typical." It also noted that while some "Bronco owners may … [have] expected the figures that were released, others be more uncomfortable [with] … well, [the] higher figures."

Using the Jeep Wrangler Rubicon as a comparison vehicle, Bronco Nation noted that Bronco is a heavier vehicle. It noted the weight is a significant factor in determining fuel economy. Bronco Nation concluded that when "it comes to gas mileage, vehicle weight matters, and even 100 pounds of additional weight can make a noticeable difference in economy."

Thus the heavier Bronco is a fuel-economy-challenged vehicle. Bronco Nation noted that in "looking at the curb weight of the Bronco by trim and power train [you] will begin to tell why the fuel economy is challenged. This is one robust (aka) heavy vehicle."

Bronco Nation noted what we at Torque News found some time back – about announcement time, in fact – that the Bronco is a pickup in Bronco clothing. Its body-on-frame construction makes it a lot more "robust" than a unibody-built vehicle like the Bronco Sport. And, while the Bronco Sport is, in its own right, quite robust, its bigger sibling, the Bronco, is built like a pickup.

Thus, "its powertrain, built for off-road applications, and [with] an engine that passes truck durability ratings, the 2021 Bronco is proving to be a thirsty vehicle." And so, while the "fuel economy numbers may be disappointing for some … [they are] plain awful to others."

Mileage Feelings Depend On The Audience

You do have to remember the target buyer for the Bronco. Priced more closely as a truck, the Bronco "with its higher prices at higher trims, is targeted toward people with room in their budget for fuel, fun, and modifications. Our bet? Even consumers unhappy with the MPGs now will forget some of the pain at the pump once they encounter the capability and smiles per mile of the all-new Bronco."