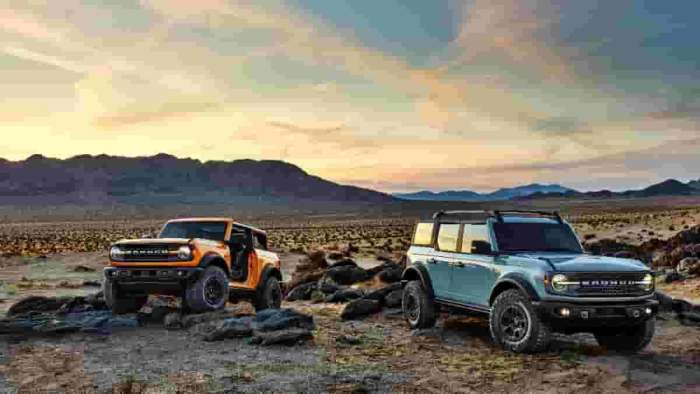 Bronco Sasquatch Takes An Excellent Vehicle And Improves It

Ford introduced its long-awaited Bronco this week and with it came some neat features. One of them is the Sasquatch option that adds serious off-roading bits to the overall SUV and improves on it.
Advertisement

Have you seen the Sasquatch lately? One has been on television lately as part of an ad by Progressive. It seems that he's more than a little sad, and he's complaining to Flo (the imaginary Progressive Insurance leader) that no one seems to believe in him anymore.

The Sasquatch’s Name Is Daryl

They continue chatting for quite a long time, and he tells Flo that even if he stands out in a clearing making Sasquatch-like moves; or is hiding in plain sight and cavorting people don't notice, and even if he stands out on the lakeshore boats to ignore him. Then, Flo goes on to talk with him, and she calls him "Sasquatch," at which he complains that "my name is Daryl."

Okay, with apologies to Progressive, let's talk about the "Daryl" -- err Sasquatch -- option on Ford's new Bronco. The "Sasquatch" option is available across all of Bronco's trim levels. It takes and already-competent off-roader and improves on it, which is saying something. This week Ford unveiled its brand-new, reborn Bronco. My colleague Jimmy Dinsmore discussed the Bronco two-door and four-door. Jimmy also looked at the new Saleen Bronco and found it upholds the Bronco's Baja heritage.

Let's get historical for a moment, and you will see why Ford had to take two years to debut the Bronco. Honestly, it is because the original was so good. When it appeared in 1965, there was only one model – a mid-sized two-door SUV. Like today's Bronco, the original featured lots of square sides and straight panels. Meantime, here's my take on the major Ford intro.

The original could seat four, or you could purchase it as a two-seater. It was a versatile SUV. Indeed, no one had even coined the term yet when it and the other trim levels were first available. The original engine was a 170-cubic-inch mill while two other upgrades included the 289-cubic-inch V-8 and later the 200-cubic-inch flat-six (n excellent engine that powered several models in 1967).

The sales of the original model were quite strong. Customers loved it, and it was a hit. Its key competition was the Jeep CJ5 and the International Scout. Almost overnight, it seemed, there was intense competition. A new competitive market was born overnight, it seemed. The competition continued into the Bronco's second generation. Ford upsized it to a full-sized SUV where it stayed there until the automaker pulled it from the market in 1996.
Now it's back, and it looks so much like a modernized version of the original that you have to stop and look more than once.

The Bronco uses body-on-frame construction, like most pickups built by Ford. Right from the box, says Motor Trend, the 2021 Ford Bronco is a formidable machine. The standard 4X4 and powerful turbo engines are excellent features.

But what happens if you want more? Well, then, here comes Daryl/Sasquatch. It's a package that is available across all Bronco lines. Indeed, there's a unique trim level, Wildtrak, where it is standard. Indeed, the Sasquatch package makes even the Base trim an off-roading demon.

As we have discussed here from time to time, when you add 17-inch wheels shod in 35-inch mudder tires, you improve performance.

There is one drawback if you opt for the Sasquatch package. If you expect anything other than a 10-speed automatic – the standard on the Bronco you are out of luck says Yahoo Autos. There is only one transmission available.

The folks at Yahoo Autos looked closely at the Bronco's Jeep Wrangler competition, the Willys Sport trim, and noted some of the critical differences. For starters, the Sport trim runs on 17-inch wheels, shod in 32-inch mud tires. As the Yahoo folks note, this is the closest they come to the Sasquatch trim. Indeed, the Jeep trim features shocks and rock rails from the Rubicon trim level, a limited-slip differential, and the Sahara/Rubicon heavy-duty brake calipers, and rotors from the entry-level Wrangler Sport.