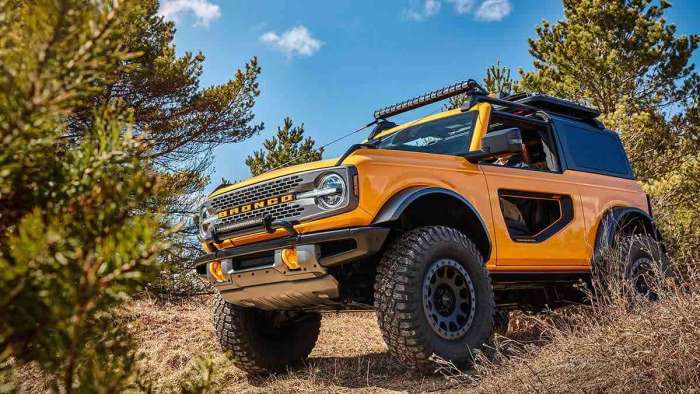 We’ve waited decades for a new version of the Ford Bronco. And even though Ford stopped making the Bronco in the 1990s, it seems like almost that long that Ford teased all of us with the next generation coming.

But today, that new Bronco was revealed. And with the big reveal, which spanned across the internet and even onto network television (on ABC, ESPN and Disney channel) the 2021 Ford Bronco can now be reserved for $100. And from what I saw tonight, many enthusiasts will be plunking down their $100 to reserve this iconic off-road flagship vehicle.

Ford has already moved Bronco under the Icon tab on their website, along with Mustang and the GT. That’s pretty good company to keep. At tonight’s reveal, Ford showed off all the Bronco can do but with some new technology and Ecoboost power and performance.

Ford also showcased the Bronco Sport, which is more of a family-oriented SUV aimed at the Chevy Blazer or Jeep Cherokee. We will cover more on the Bronco Sport later on Torque News. For now, let’s dive into all the goodness of the two-door and first-ever four-door Bronco.

“We created the Bronco family to elevate every aspect of off-road adventure and equipped them with class-leading chassis hardware and exclusive technologies to raise the bar in the rugged 4x4 segment and take people further into the wild,” said Jim Farley, Ford chief operating officer. “They’re built with the toughness of an F-Series truck and performance spirit of Mustang – and come wrapped in one of the most stunning and functional off-road designs that’s true to the original Bronco design DNA.” 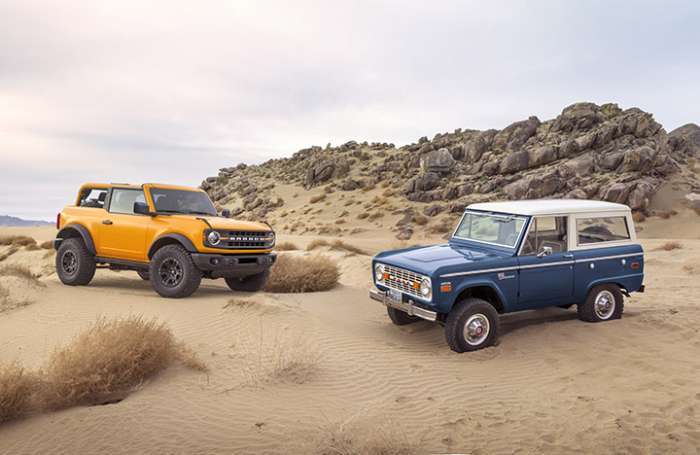 Two-Door Ford Bronco
It will please all Bronco enthusiasts to see that Ford has preserved much of the heritage of the classic-two door Bronco but added some modern flare and touches.

Two-door models come with a standard three-section roof system – left and right front sections and a rear section – molded-in color and an available premium painted modular top with four sections that adds a removable panel over the rear seats and cargo area.

A leaked photo of the two-door Bronco (pictured above) leaked in a Facebook group full of die-hard enthusiasts and they liked it, a lot. The smaller size more closely resembles the Wrangler II, but it certainly holds true to the iconic look and heritage of the Broncos of the 1970s and 1980s. 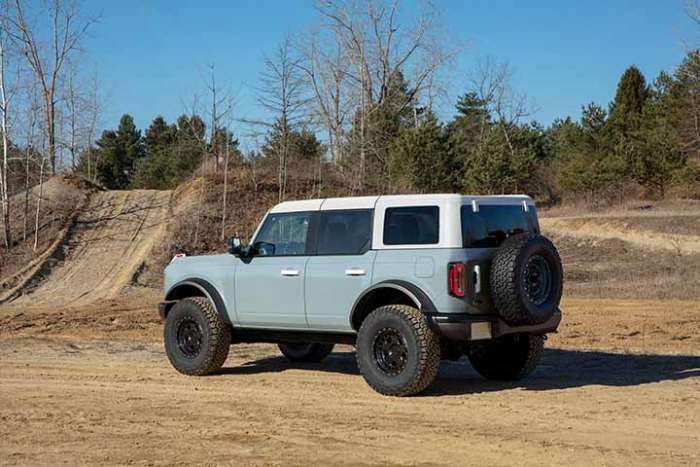 Four-door models have four removable roof sections – left and right front panels, a full-width center panel and a rear section. Roof panels on all models can be removed by one person by unlocking the latches from the interior. First-row panels stow away onboard on two-door models.

Every Bronco comes with class-exclusive frameless doors that make them easier to remove than what competitors offer. On four-door Bronco models, all four doors can be stored onboard with protective door bags.

Will There Be A V8 Engine in the 2021 Ford Bronco?
This answer will not make the old schoolers and the die-hard Bronco enthusiasts happy. There is no V8 engine on the 2021 Bronco.

There will be two Ecoboost engine options for both the two-door and four-door Bronco.

“Race-bred EcoBoost engines and our segment-first 7-speed manual and available 10-speed automatic transmissions give the all-new Bronco the optimal combination of power, torque and gear ranges to perform in a wide variety of terrains and uses,” said Pericak. 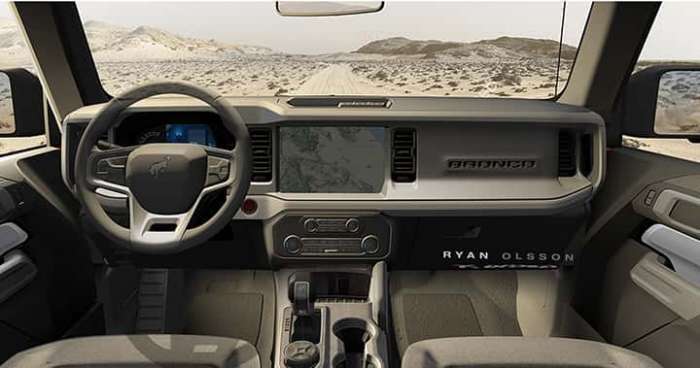 High-Tech Interior Features of the 2021 Ford Bronco
The instrument panel is inspired by the first-generation model, with gauges and controls clearly visible and intuitive. Colors and materials are inspired by natural palettes and outdoor gear. With off-road functionality paramount, materials are tough and rugged.

A multifunction color LCD instrument panel is front and center with the transmission shifter/selector and G.O.A.T. Modes controller in the center console. Available grab handles are integrated into the modular instrument panel and center console, while available MOLLE hooks are mounted in the seatbacks. Attachment points are built into the instrument panel to mount a bring-your-own-device rack, with 12-volt power connections to easily mount cameras, navigation units, phones or other devices.

Further setting Bronco ahead of the off-road competition is an available segment-exclusive 12-inch SYNC® 4 system with over-the-air updates and seamless integration to the FordPass Performance app with off-road navigation – a Bronco class-exclusive feature that allows owners to easily plan, navigate and share their off-road adventures. The SYNC system also displays the available 360-degree camera system with class-exclusive off-road spotter views to provide additional visibility in technical pursuits such as rock crawling.

“The trail mapping system available on Bronco is truly a game-changer in the off-road community,” said Grueber. “It works online or off on either of the navigation-capable 8- or 12-inch SYNC systems, allowing users to select one of hundreds of available curated trail maps to map out and then track, capture and share their adventures with others.” 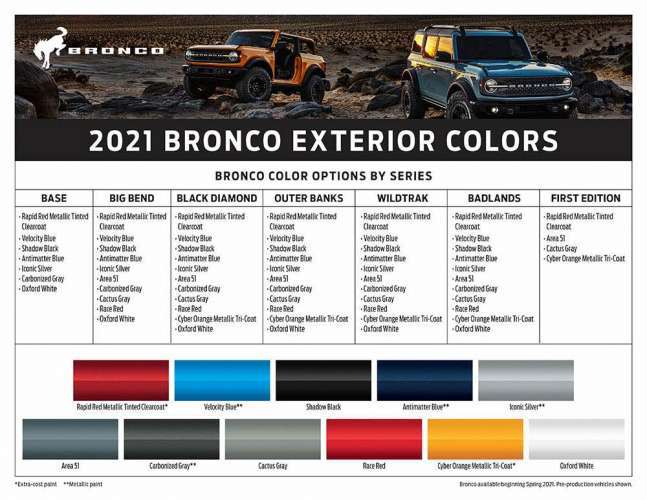 Trim, Color and Pricing Information For 2021 Ford Bronco
Production for the Bronco begins in early 2021 for release later in 2021.

Seven unique Bronco series are offered, with matched color and trim combinations. When combined with four content packages, numerous available options, 11 color choices and more than 200 dealer-installable accessories, personalizing an all-new Bronco SUV has never been easier. There are some fun colors and not all colors are available for all trims. See the chart above for all color/trim options.

Series range from a base Bronco, a no-frills SUV for those who want to customize their own, to Big Bend, Black Diamond and Outer Banks with a variety of options and colors, topping out with Wildtrak and Badlands for more extreme off-road adventuring. A limited-production First Edition will be offered at launch.

As with the five generations before it, the all-new 2021 Bronco two-door and four-door models will be built at Michigan Assembly Plant in Wayne, Michigan. More detailed information, including vehicle specs, accessories and full pricing and options, will be provided closer to launch. MSRP for the base two-door Bronco is $29,995, including $1,495 destination and delivery.

My colleague Marc Stern will be weighing in with his thoughts on the Bronco and the Bronco Sport, plus we will have more information on this iconic off-road vehicle here at Torque News where we’ve created a page devoted to the Bronco on our site now that the Bronco is finally and officially launched.

So there’s the initial information and the photos. What do you think? Is this a vehicle that can compete with the Jeep Wrangler. I sure think it can, and at that under $30,000 starting price, that will challenge Jeep as well. Let me hear your comments and thoughts on the return of the Ford Bronco.