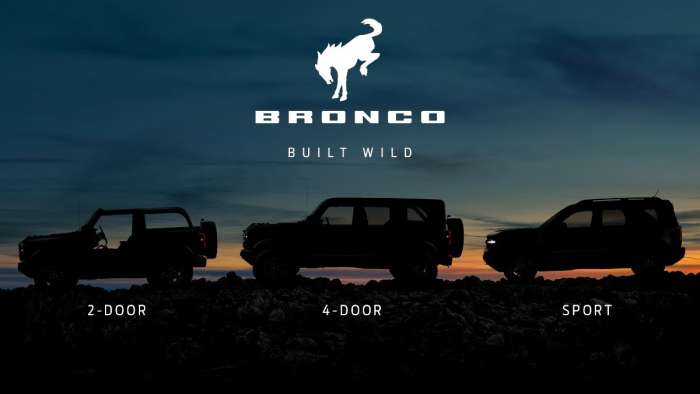 Ford and Disney Media properties have made the decision that Disney network and cable properties will host the important Bronco reveal next week.
Advertisement

When Ford opens its Bronco reveal next week, you will undoubtedly know it. The automaker is teaming with Disney’s CreativeWorks, among other networks, to present the three shades of Bronco to the public.

Ford’s plans call for three custom three-minute films set to air not only on Disney, but also on ABC, ESPN, and National Geographic. The official reveal will occur next Monday at 8 p.m. (EDT). If you miss the custom reveal segments, they will be available Tuesday on Hulu.

The exclusive videos will not only highlight the significant features of the new Bronco brand, but they will also illustrate many available features. Also, Ford will share additional content, featuring the Bronco lineup’s capabilities and new features. Ford plans to show these added features on its social networks.

Since the 1960s, the Ford Bronco has been “an icon that has captured people’s imaginations and inspired them to explore the most remote corners of America and the world, says Jim Farley, Ford’s chief operating officer.

He continued that as “a new era for Bronco begins, we’re proud to tap the strengths of epic adventurers like Jimmy Chin and Disney storytellers to help bring Bronco to life to inspire millions of people to get out into the wild.”

Initially, Ford had planned to reveal the all-new Bronco 4X4 SUV lineup in June at the revamped, outdoor-inspired North American International Auto Show in Detroit. However, after the coronavirus pandemic prompted show organizers to cancel the 2020 edition of the significant vehicle extravaganza, the Ford team reworked the reveal strategy, aiming to pull in an even broader audience for its hotly anticipated Bronco debut.

As already noted, the Bronco reveal marks to first time Disney CreativeWorks, Disney’s award-winning creative agency, that its customer branded content will be deployed across multiple networks in prime time. Next Monday, each network will show specially prepared three-minute messages. They will be part of the first commercial break in the 8 p.m. hour. The content will be available to viewers on Hulu starting Tuesday.

“At Disney, we take pride in creating the culture and leveraging our unrivaled portfolio of brands to authentically and creatively tell stories during meaningful moments,” said Rita Ferro, president, Disney Advertising Sales. “With Ford, we’re reimagining what a product reveal can look like by drawing upon our best-in-class sports, entertainment and streaming brands to bring the new Bronco family to live in a way that honors its heritage and gives viewers an unforgettable experience.”

Here’s how each network’s custom film will reveal the all-new Bronco family:

-- Bronco will be featured in a three-minute film starring country singer Kip Moore during “CMA Best of Fest,” the Country Music Association’s three-hour concert experience, airing Monday from 8 to 11 p.m. (EDT). -- A film, featuring a different Bronco model and professional climber Brooke Raboutou will air during “SportsCenter.” -- Academy Award-winning director and acclaimed cinematographer, photographer, and professional climber Jimmy Chin will spotlight another Bronco during “National Parks: Yosemite.” Additionally, Chin will judge a hashtag challenge contest and appear in an Instagram story featuring the Bronco on NatGeo’s Instagram account. -- On Tuesday, all three custom films will be available on-demand on Hulu. The films will be available to viewers through interactive ad formats, and within a curated collection of free and survival-themed content aligned with the Bronco lifestyle. -- Ford will share more special content with fans on its YouTube, Facebook, Instagram, and Twitter channels starting at 8 p.m. Monday. This content will be in addition to the films created for ABC, ESPN, and National Geographic. Viewers might well tune in to find out details on the performance strengths of each new Bronco model.

Until Monday, Bronco fans can follow Bronco’s latest news and watch the countdown to the reveal @FordBronco on Instagram. You can also take a proactive step and reserve a Bronco for $100 starting Monday at ford.com.