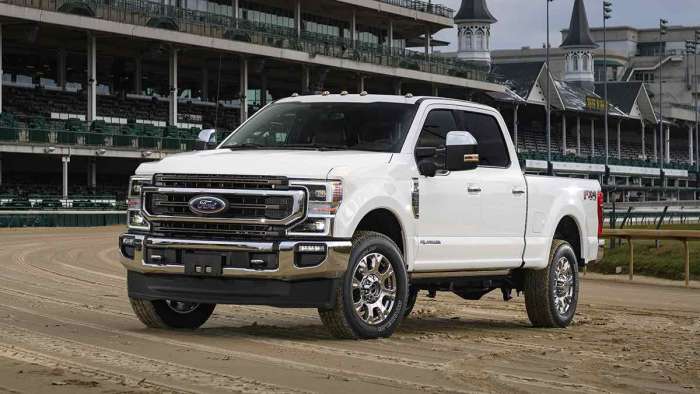 Two American icons join forces as Ford and Churchill Downs enter a multiyear partnership. Ford F-Series Super Duty as well as Ford Expedition will be part of the sponsorship agreement. 2020 F-Series Super Duty will serve as the featured vehicle for the 146th Kentucky Derby.
Advertisement

Matt Van Dyke, Ford marketing director said the partnership makes so much sense. “While our workhorse trucks naturally play a huge role supporting the many aspects of the equine and racing industries, our legendary sports car is named Mustang and our much-anticipated off-roading icon is Bronco. Ford products capture the freedom synonymous with the relationship between a winning horse and jockey.”

Louisville is where the F-Series Super Duty is manufactured
The partnership between Ford and Churchill Downs makes so much sense from a logistical standpoint too. Louisville, Kentucky is home to two Ford factories.

“With Louisville Assembly Plant and Kentucky Truck Plant practically in the backyard of Churchill Downs, Ford’s participation in this uniquely American tradition is long overdue,” said Matt Van Dyke. “The Kentucky Derby is the longest-running sporting event in the United States, and one of the most iconic celebrations of the year.” 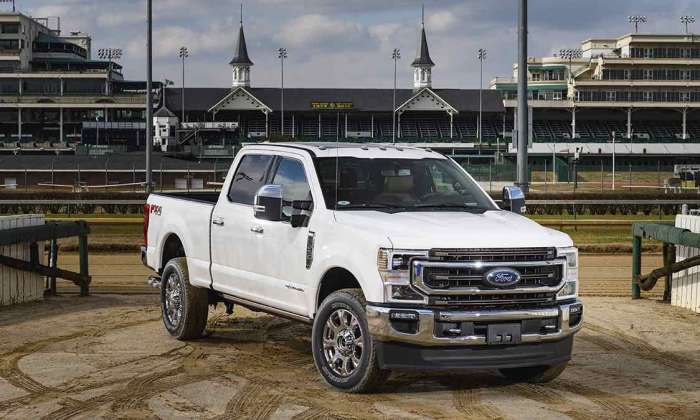 Ford-themed activities during Kentucky Derby
As official truck, non-luxury SUV, car and van of Churchill Downs and the Kentucky Derby, Ford is hosting on-site activations throughout Derby Week, including special access for FordPass Rewards members plus celebrations for veterans and active duty military personnel. Each Kentucky Oaks and Derby horse owner will also receive a Ford Explorer to use during the event. In addition, Derby attendees can experience a wide variety of displays highlighting the Built Ford Proud lineup, including the new 2020 Ford F-Series Super Duty that recently began production at Kentucky Truck Plant and the all-new 2020 Ford Escape that’s built at Louisville Assembly Plant.

“Our employees here in Louisville are proud to be building products that play an integral role in our customers’ lives, and now for the great American tradition that is the Kentucky Derby,” said Joe Bobnar, Ford director of manufacturing for Louisville Assembly Plant and Kentucky Truck Plant. “This partnership means something special to our thousands of dedicated employees, retirees and dealers in the Louisville community.”

The company will also host a Ford Day during the 2020 racing season, granting Ford employees and their guests free admission to a race day at Churchill Downs.

Community partnerships, like this one with Churchill Downs are so important to car manufacturers. Often these assembly plants, like the Louisville Assembly Plant and the Kentucky Truck Plant are vital parts of the local community. So it’s great to see Ford show that respect to the Louisville region at such an iconic event as the Kentucky Derby.

Make sure to read my story about the recalls going on with the current generation Ford F-150. Also, I have some more information on both the hybrid F-150 and the EV F-150 that are coming in future model years.

Jimmy Dinsmore has been an automotive journalist for more than a decade and been a writer since the high school. His Driver’s Side column features new car reviews and runs in several newspapers throughout the country. In addition to being a nationally syndicated automotive columnist, Jimmy is also author of the book “Mustang by Design” and “Ford Trucks: A Unique Look at the Technical History of America’s Most Popular Truck”. Follow Jimmy on Facebook, and Twitter.