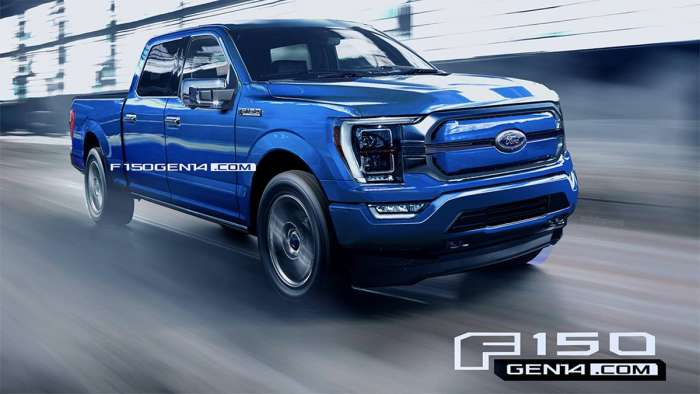 New rendering shows what the electric Ford F-150 might look like as Ford continues their electrification plans for America’s best-selling vehicle.
Advertisement

I wrote earlier this week about how Ford was going “all in” on electrification. It all started with the Mustang Mach-E (which of course I’ve written extensively about including my first drive thoughts), but recently Ford Motor Company Chief Operating Officer Jim Farley mentioned the company’s “big bet” on electrification. And they’re even launching an EV version of their very popular Ford Transit cargo van for commercial use.

What Will The Electric Ford F-150 Look Like?
Now, we know a little more about the EV Ford F-150. First, let’s be clear, this is happening. Ford launched an impressive video of the prototype F-150 towing more than a million pounds of cargo trains loaded with F-150s. It was quite the showoff. This was not a publicity stunt.

It’s a big gamble for Ford to “mess” with the recipe for success for the F-150, which is the best-selling vehicle in America. Of course Ford has shown to be the gambler by also messing with the hallowed Mustang name too and making a four-door, electrified crossover. So, will Ford be so bold as to drastically modify the 2022 EV F-150?

Based on this rendering provided to us by F150Gen14.com, we can see some styling hints with the Mach-E. The grille is the specific area where the EV F-150 takes a big change. Ford’s styling team seems to make a drastic change on the grille from what we’ve seen with the current generation F-150. In fact, from this rendering, the grille has some resemblance to that of the Mach-E with a cleaned-up closed grille.

Additionally, we see the headlights have a much different look, rather than the stacked-up look of the current generation. I wrote this week about some recall issues going on with the daytime running lights and the headlamps of 2018-2020 Ford F-150s. We can hope that this minor issue is resolved for the EV version of the F-150.

What Range Will The 2022 EV Ford F-150 Have?
The 2022 EV Ford F-150 is expected to have a range that exceeds 300 miles although those details aren’t confirmed at all by Ford. Ford has partnered with Rivian to share battery technology. So, if we assume that the EV F-150 will be similar to Rivian’s R1T pickup then it might even have 400+ mile range with a 180-kWh battery configuration.

How Much Towing Capacity Will The 2022 EV Ford F-150 Have?
If we compare the EV F-150 to the Rivian R1T, then we have a good feel for what the future electrified F-150 might be able to tow. The R1T has a payload capacity of more than 1,700 pounds and a trailer weight rating exceeding 11,000 pounds.

If Ford’s video of the prototype EV F-150 pulling more than a million pounds was accurate and not some kind of gimmick or trick, then you can be assured that payload and towing won’t be limited with this EV F-150.

When Will The 2022 F-150 EV Be Released?
Again this information is unconfirmed by Ford, but one source claims the model year 2022 F-150 EV will be released in the 2021 calendar year, which may beat the Tesla Cybertruck to market. The Cybertruck is Ford’s primary target with the F-150 EV.

According to the same source, Ford will release the 2021 F-150 hybrid later this year. It will be interesting to see how that truck is received. There’s more negative feelings surrounding hybrids than EVs. Informed consumers know that pure electric vehicles have plenty of power and torque, but they don’t feel that way about hybrids. 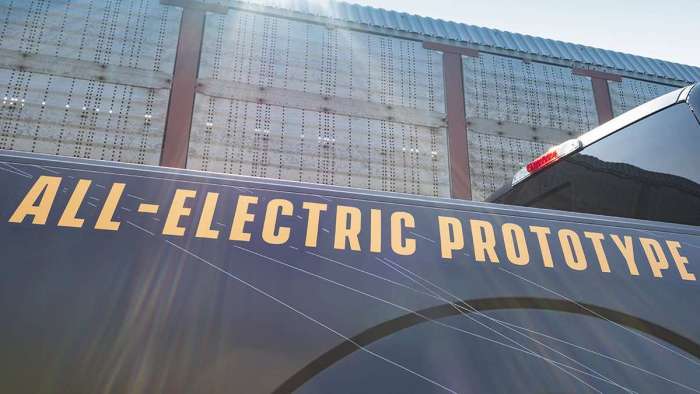 Ford’s Plans for Hybrid and Electrified F-150
Ford recently announced that they were investing $750 million into a production facility in Wayne, Michigan that would add more than 2,700 jobs. This investment is part of Ford’s global initiative to produce more hybrid and battery electric vehicles, including the F-150. Both a hybrid and EV version of the F-150 are planned.

Sherif Marakby is the vice president of Autonomous and Electric Vehicles for Ford and he said, “Throwing a charger in the trunk of a vehicle and sending customers on their way isn’t enough to help promote the viability of electric vehicles. In addition to expanding our electric vehicle lineup, we are redesigning the ownership experience to ensure it addresses customer pain points that currently hold back broad adoption today.”

Farley added, “Hybrids for years have been mostly niche products but are now on the cusp of a mainstream breakout. The valuable capability they offer – plus fuel efficiency – is why we’re going to offer hybrid variants of our most popular and high-volume vehicles, allowing our loyal, passionate customers to become advocates for the technology.”

In 2020, Ford will unveil a hybrid F-150. Shortly thereafter Ford will debut an all-electric F-150. They’ve already released a video showing the towing capability of the electrified pickup truck. These trucks will be built in the Dearborn Truck Plant, where Ford just invested to accommodate the increase in production.

Now will the truck community embrace an electric pickup truck? I think it's smart for Ford to be the first out of the gate with this. They've always been innovators in the truck world, so why not test the waters with an electrified EV F-150? Be sure to let me know if you're on board with an electric F-150 by commenting below.