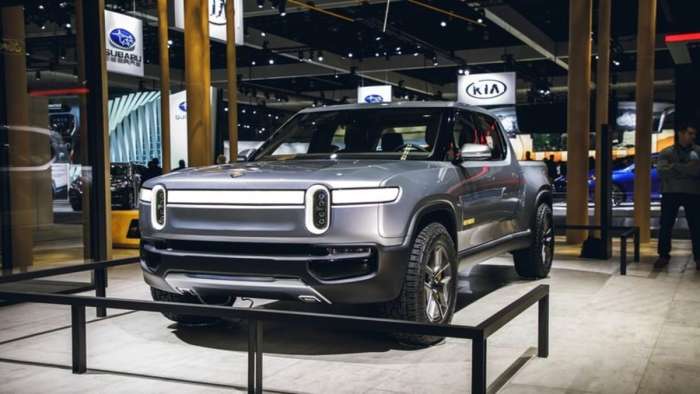 Rivian Automotive Is Going To Take Tesla For A Run

Rivian Automotive is America’s second streamlined electric car maker. We know Tesla as the powerhouse of this niche industry. Is Rivian a threat?
Advertisement

Who is Rivian Automotive?

Rivian Automotive is America’s second all electric car manufacturer that is largely been outside the public’s eye. Enthusiasts have seen little news about this manufacturer especially because of Tesla’s new found success. Rivian is due to be an aggressive competitor to Tesla as it is heavily backed by monolithic names like Jeff Bezos and Amazon, and other notable investors including Ford. Amazon actually pledged to buy 100,000 vehicles for its delivery service fleet to keep true on their “clean earth promise.” CEO Robert Scaringe has raised over $1.6 billion and Amazon and Ford represent large portions of that. Rivian is approaching fast in Tesla’s wake and could be a very popular name in the next year or two.

Rivian As A Business

Rivian has not yet sold a single car yet. They are largely unknown outside of automotive think groups, and they are privately held. They currently offer looks into two types of cars, and at this time it is unknown whether or not these will be their only cars. They showcased a sports utility vehicle and a pickup truck. Both of them are the most profitable types in the consumer vehicle market and Rivian promises an incredible jump in battery range and durability from its competitors.

Rivian’s SUV named the R1S has been debuted at multiple official car shows. It is set to release in 2021 with an estimated starting price of $72,500. It features room for seven passengers which means its looking for headshots on the Model X; the only other three row SUV in the all-electric market. It’s also going to be less expensive than the Model X. It will come in three models distinguished by battery range and power, highest model having 754hp. However, all models come standard with motors on each wheel. Every model from expensive to super expensive will however include up to 7,700lbs of towing capability.

The R1T is Rivian’s first production vehicle and it’s actually a pickup truck. It aims to bring a reliable and practical all-electric truck to the market where there currently is none. Tesla has promised a truck but has yet to give out a design. Rivian however, just designed a truck and then brought it to the LA Auto Show. It impressed enthusiasts and journalists a like, with its capable statistics and promises up to 400 miles of range. Rivian claims that the R1T will be the most aerodynamic truck in the world, which is pretty cool. The R1T shares similar specs to the R1S but there doesn’t seem to be an estimated price, I can imagine it would be similar.

Tesla is a household name at this point, and definitely on Wall Street. Not only has it been a financial anomaly in the last couple months, but Elon Musk has showcased Tesla’s performance and dedication to an entirely electric future. Rivian has demonstrated their aptitude when it comes to battery powered vehicles and clearly business titans like Jeff Bezos and the Ford Motor company believe in Rivian as a brand. Elon Musk has produced quite a lineup and Tesla will always be number one when you think about electric vehicles, but we haven’t seen what Rivian can do quite yet, only the market and time will tell. Here’s to driving a R1T!

Alex Belauste writes for TorqueNews about all things Tesla. He has grown with the automotive culture, and once he's going, can't stop talking about cars. Alex writes automotive news based on research, his personal expertise and experience. Alex has studied business at Oklahoma State University and joined the business of the automotive world. Follow Alex on Twitter at @Belauste and on Instagram. Search Torque News Tesla for more daily Tesla coverage from our expert reporters.

Les shaw wrote on February 26, 2020 - 7:20pm Permalink
Old news
DeanMcManis wrote on February 26, 2020 - 8:21pm Permalink
The Rivian R1T will be a threat, but the rival is NOT the Cybertruck or Hummer EV yet. The BIG rivals are the gas and diesel powered trucks that have totally controlled the truck market for many decades now. The F150, Silverado, and Ram trucks. Most people will instantly mention the lower price of gas pickups, compared to the $70K entry price of the Rivian and $40K-$70K Cybertruck EVs. But the average selling price for a new Pickup in the U.S. is $48K, and it is easy to see loaded SUVs like the Lincoln Navigator and Cadillac Escalade pushing $100K, let alone the European performance SUVs that easily pass 6-figures when optioned out. Recently Rivian announced that their $69K starting price will not actually be the base model, but a loaded mid-level Rivian price instead. This is a clever way to say that they are dropping their price to compete against the $40K Cybertruck, and of course all of the fossil fueled pickups out there. I secretly think that Rivian will be losing some real money on their first models just to get them out on the roads, and they have deep pockets to pull that off. But the big news for the pickup truck world is that Rivian is due out this year and will become the first mass market EV truck ever built. So there will be a pent up demand for the R1T for several months or more, at least until the Cybertruck and rival EV pickups from Ford and GM arrive next year. The Rivian's odd headlights still bug me a bit, but the rest of the design and engineering of the R1T and R1S look impressive, and I am hoping to get a drive in one soon.