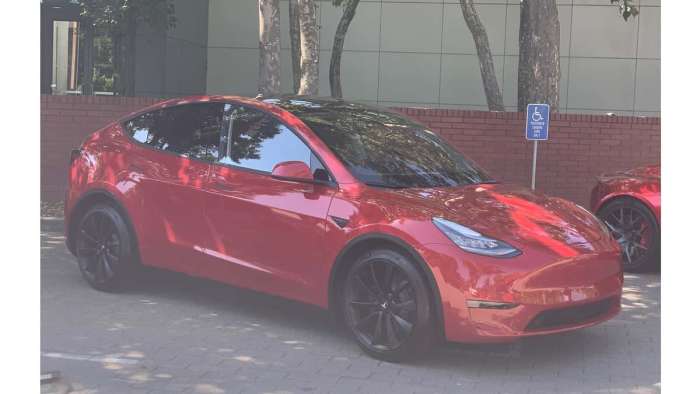 A few days ago my distinguished colleague, the editor in chief of Electrek, proclaimed that a 400 mile range electric car was not needed. As if he were King George, his royal edict proclaimed as he has in the past, a 200 mile range car was “plenty.” Well, consider me to be John Hancock and the Continental Congress: live free or die. We hold these truths, that not only is the 400 mile range electric car needed, but Frederic Lambert is wrong. Here’s why.
Advertisement

My Declaration of 400 Mile Independence and the case for the need of a 400 mile range electric car. Why cars like Tesla Model 3, Model S and Nissan Leaf should have at least 400 mile range.

“200 miles of range is more than enough for well over 95% of the population, especially when combined with expansive quick charging networks like Tesla’s superchargers. There are maybe some extreme use cases, like people who do a lot of mileage and long-distances for business, who really need more than that.

The vast majority of trips in North America are less than 30 miles and for the very rare occasions that the average driver travels more than 200 miles in a single day, they generally take breaks (to eat, drink, or other things), which gives opportunities to charge.”

1. First of all, who is Frederic to decide what’s best for the electric car magazine reading public? He constantly does this to my annoyance, as much as I respect him, I do. Boy did he get a handful in the comment’s section. There’s a reason why Tesla and Rivian are offering different options of different ranges. Remember the old EPA saying about mileage per gas gallon: “your mileage may vary?” So it is with electrics.

2. What’s the big hoopla of offering 400+ miles of range? For most cars you most likely for now don’t have to buy them exclusively!

3. We need to shut the perpetual “range anxiety” people up. These are the same people clinging to their hybrids thinking that Exxon/Mobil will have chargers available nationwide someday soon. They can keep their hybrids while they keep dreaming. By making an electric car that has about the same range as an appropriate counterpart gas vehicle, 400 milers should have plenty of mileage, time, and options to “refuel.” A paltry 200 mile car short of a commuter won’t cut it.

4. Stated range usually means less in reality. When a manufacturer says 230 mile range that actually means for you ideally 200 miles, as the car gets older, 175 miles, especially the way the average American car owner keeps his car at 10 years, most likely with electrics, 15 years. When my readers see range they often forget this that they argue this with me, that 200 +/- miles is fine. For a vehicle especially an SUV designed to go off grid off road in remote areas for prolonged periods, it is not.

Unlike the way you’re used to drive gasoline, you can no longer “drive on fumes” with electric. The mileage these manufactures are posting are as if you’re driving like an old lady on Sunday that most of us don’t drive that way. Instill this in teenagers and young adults in the household as they absorb electric driving. You should always leave a 25+ mile cushion to recharge in case of an electrical short/something left on, foul weather, emergency, etc. And in extreme weather expect to lose anywhere around 60% of that charge at full charge.

This is where I do battle with the iPace, e-Tron, and Mercedes EQC people that a 230+ mile range for a big SUV is inappropriate and for these reasons. I heard a handful from disappointed Jaguar drivers over the winter about how most of their full charge dissipated in the dead of winter into the start of their drive when they least expected or frankly, least needed for that to happen. These wagons are heavy in weight as they are. You just matter as well make them even heavier as appropriate to get the ranges they really need. They weren’t made to go fast or be nimble like sports cars anyway. In fact they’re supposed to be driven and treated like trucks that they are, that most don’t. Remember, the gas versions have 30 gallon gas tanks and for some, an extra portable tank strapped to the back. That’s the kind of driving they were really made for.

5. A case for the bigger battery. The bigger the battery, the longer its range, the longer it’ll take to overheat or freeze, the more reliable the pack it’ll be, and the longer it’ll last in longevity. There’s more pack for the car to work with, which is one of the reasons why long range electric car batteries last so long. Though they’re not ion, this is the same principle and reason why some of the nickel batteries inside some of the 100 year old Brass Era electrics in collections and museums, many of them with 80 mile ranges which was considered a lot at the time, are still running strong.

6. A case against the smaller battery. Like a PHEV, Prius, and LEAF battery, the smaller the battery the quicker it’ll take to freeze or overheat, the shorter its range will be in hot or colder climes. When running at charging or highway speed the quicker amount of time it’ll eventually run constantly hot, thus the shorter the longevity it’ll have. There’s less ion battery in the pack for the system to work with. This is where I’m baffled at Frederic’s proclamation. He should know better as judging from his Tesla Model 3 freezing door handle story he lives in a cold part of the country.

7. With a 400 mile range BEV those pesty smog producing, non-zero emissions PHEVs are no longer needed. They aren’t and if you knew anything about their history and their original purpose you wouldn’t argue with me about this, as I’m getting tired of arguing this with any of you that most don’t read into history. There’s a reason why Europe is banning these cars as well as ICE. They are temporary transitional vehicles we don’t need anymore, at least as passenger vehicles. In fact if you live in a remote area I discuss below, your situation is better suited for a longer range BEV. Some of you cling onto a technology that works for you to not open your minds to something that might come along that’s better for you. I can’t reason with you folks who do that: “well it works for me.” God bless you caveman! There’s a reason it’s called mass production, otherwise Bentley of all people are about to make great hybrids we don’t need. Maybe the rich do! They’ll be the only ones left selling hybrids. Even Toyota is smelling the coffee!

8. Remote areas. Out west there are 11 states where the average distance between each public charger is 80 miles. Frederic needs to tell these people outside of the home or office base where else to charge with only 200 miles of range. A 400+ mile long range BEV is perfect for this region, in fact now even better than ideal that any hybrid could ever offer.

10. No home/office base. What about the apartment dwellers and ancient homes/buildings with old electricals that don’t have a home/office base? That 400 mile ranger will come awfully handy.

11. How about the urban/suburban point to point all day driver who won’t have time to recharge all day? There’s plenty of you people I know in my home area of SoCal and you peeps, my peeps, need to speak up!

12. Charging dynamic. We need to get used to the charging dynamic not being anything closely remote to the gas dynamic. You need to take out your phone and use an app for that and make an appointment to charge. Depending how quickly the proliferation goes, we might even see long lines at public chargers, that I hope not. But you know the cop in me, I hope for the best, but prepare for the worst. So should you. A charger will not always be around the corner when we want them to be like gas. It’ll take a while and most likely not in most of our lifetimes we’ll see anything close to that. So until then, its awfully nice to have an electric car that we can drive away without worrying about recharging every 200 miles.

13. Power outages. Rolling blackouts are become the norm because of our horrible infrastructure of a power grid. And with electric car proliferation we should expect it to get worse before getting any better whenever they rebuild it, if they ever do. Until then having a 200 mile range car does not help when you need to get home or to a public charger and there’s a brown/black out. Having a 400 mile range car not only means that if you’re prudent with recharging you have a better chance to outlive a brownout instead of grounding your depleted car, you just might have extra energy to light up your house to see what fold/crack of your body you’re cleaning while you’re in the bath tub bathing yourself; get it?

14. Disaster/catastrophe/apocalypse. Closely related to the previous, but given its own category because when you’re dealing with something like that, the last thing on your goddamned mind is charging your 200 mile ranged car okay? You want to get the hell out of the way, and if 400 miles is your range, you’ll want to worry about recharging elsewhere. Whatever.

Do you folks now understand how important it is we have 400+ mile range electric cars? Someone please explain this to my dear colleague Frederic. I haven’t met the man, not yet, and I eagerly do one day, as I sincerely respect him as a trail blazer in this field, but he’s chopping off the electric car movement by doing this “what they give you is enough” thinking. Don’t short change yourself with ancient technology, and with the new tech, don’t be modest. Like it is when we think big and bold as a country, we need to do the same sometimes with our personal choices, so as long as they don’t take us to bankruptcy court. This is how we became a superpower, and did things like go to the moon. We need to have the same approach when it comes to autonomobility and electromobility as well.

In the spirit of the Continental Congress that got us here to debate these issues to begin with, I wish you all ahead of time a Happy Independence Day!

Photo Credit: Twitter User Vincent, who has generously allowed us to use his materials in the past.

Wow!! See what I found in here people

And please keep in mind that the opinions expressed here are solely mine, and not those of Hareyan Publishing or its employees, which include my staff colleagues. By the way new Easter Eggs games are coming to Tesla, reports Torque News Tesla reporter Brian Jenkins.