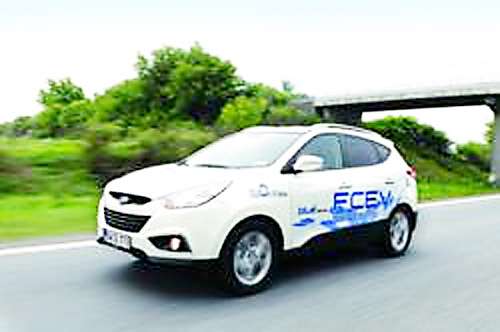 Hyundai Motor Company is leasing 15 of their zero-emissions hydrogen-powered ix35 Fuel Cell vehicles to the Municipality of Copenhagen, in support of Danish efforts to create a carbon-neutral city by 2025.
Advertisement

The agreement is a milestone for Hyundai, rapidly gaining a reputation as an industry leader in fuel cell technology and environmentally considerate cars. The brand operates a full time fuel-cell research division called the Eco Technology Research Institute in South Korea.

Denmark is a world leader in the development and use of renewable energy. The addition of the ix35 Fuel Cell to Copenhagen’s city fleet is an opportunity for Denmark to evaluate the technology, while Hyundai will gain valuable feedback on the performance of its Fuel Cell vehicle.

"We are very proud The Municipality of Copenhagen has chosen us as the supplier of hydrogen vehicles. We consider it as evidence the municipality is aware of Hyundai’s leadership in eco-friendly vehicles,” said Niels Rønnebech, Managing Director of Hyundai Denmark. “The municipality deserves high praise for leading the way in helping to develop new technology.”

The hydrogen-powered Hyundai ix35 Fuel Cell is a true zero-emissions vehicle. The fuel cell stack converts hydrogen into electricity to power the cars motor with water the only byproduct. The ix35 Fuel Cell is an effective new solution for public and private fleets needing to reduce carbon emissions and fight climatic change.

The ix35 Fuel Cell drives just like an internal combustion car, yet possesses the wherewithal to withstand the rigors of daily use by public and private fleets. Fueling takes only a few minutes and the ix35 Fuel Cell has a top speed slightly under 100-mph. Its range is roughly equivalent to a gas-powered variant.

Hyundai selected the ix35 SUV as the first in its fuel cell commercialization project. A top selling vehicle in Europe and a trailblazer for Hyundai’s Fluidic Sculpture design, the ix35 is held dear by families and businesses alike, a result of its easy handling and five-passenger seating.

Hyundai has invested 14 years and a lot of money in the research and development of hydrogen fuel cell technology. Hyundai launched the fuel cell program in 1998 with an agenda aimed at commercialization by the end of 2012 followed by consumer sales in 2015.

As Denmark has a well-established hydrogen infrastructure, it’s a perfect launch point for the ix35 Fuel Cell that is already well acquainted with the Danish climate, having logged 45,000 km over Danish roads recently in two test cars.