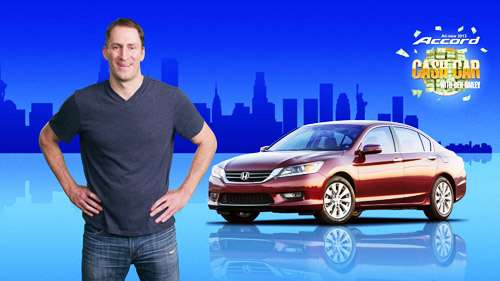 Getting to know the 2013 Honda Accord could win one

One part of the marketing launch of the all-new 2013 Accord, involves the first-ever Accord Cash Car competition in New York City's Times Square on Oct. 6.
Advertisement

Additional appearances will follow in Chicago, Phoenix and Los Angeles. The Accord Cash Car promotion allows audience participation to win cash prizes and maybe the sedan itself by demonstrating knowledge of the all-new 2013 Honda Accord's new features.

The events will be hosted by Emmy-winning stand-up comedian and television personality Ben Bailey of Cash Cab fame, the fun and entertaining Accord Cash Car events will see contestants joining forces to answer questions about the ninth generation 2013 Honda Accord. The right answers are awarded cash prizes and every contestant will also be entered in a drawing to win an all-new 2013 Honda Accord.

The promotion by Honda is intended to spread awareness of advanced features like the new rearview camera, Bluetooth HandsFreeLink, USB/iPod integration, SMS text message function and a 160-watt AM/FM/CD audio system, not to mention a two-door coupe, available in the 2013 model for the first time.

The Accord Cash Car marketing program uses a game show format to highlight and build awareness of the completely redesigned Accord. Honda wants you to know it is not a one-spec machine, but a total package blending luxury, safety, efficiency, agility and advanced technology to make it a smart choice in a highly competitive segment.

"With an innovative, fun-to-drive product like the all-new 2013 Honda Accord, we wanted to create an exciting, innovative contest to help people experience it," said Mike Accavitti, vice president of automotive marketing at American Honda Motor Co., Inc. "Accord is the new value leader in the mid-size class because it excels in all areas and the Accord Cash Car promotion will bring that story to life."

The Accord Cash Car events will feature an outdoor set complete with several variants of the all-new 2013 Honda Accord. Over six hours, multiple groups of three-person teams will participate as contestants, one each hour, while the proceedings are broadcast live on a large-screen display. Following the New York installment, the Accord Cash Car event moves to Chicago's Navy Pier Gateway Park on Oct. 20; the Arizona State Fair in Phoenix on Nov. 3; and the Hollywood & Highland Central Courtyard next to the Kodak Theater in Los Angeles on Nov. 10.

The ninth-generation Accord has an all-new direct-injected powertrain, class-leading safety innovations and a coming plug-in hybrid. The new models are powered by 4-cylinder, V-6 or hybrid powertrains, coupled with manual, automatic or continuously variable transmissions.

The 2013 Honda Accord Sedan went on sale September 19, with the Coupe to follow on October 15. An all-new 2014 Accord Plug-in Hybrid Sedan will debut in early 2013, followed by a conventional hybrid in the summer of 2013. The cars range in price from $21,680 for the well-equipped Accord LX to $33,430 for the luxurious Accord Touring model.

Previous and current Accord owners will be contacted via email to promote the event in the cities involved, while local Honda dealers also provide invitations. Other promotion consists of banner ads on Honda.com, on the brand’s Facebook page, as well as through a dedicated Accord Cash Car website.

"The 2013 Accord excels in all areas with sophisticated design, a luxurious interior, world-class dynamic performance, class-leading standard features and legendary Honda quality, all at a tremendous value for the customer," said John Mendel, executive vice president of sales, American Honda Motor Co. Inc, "2012 is the year of the midsize sedan, and the new Accord will once again solidify Honda's position at the head of the pack."