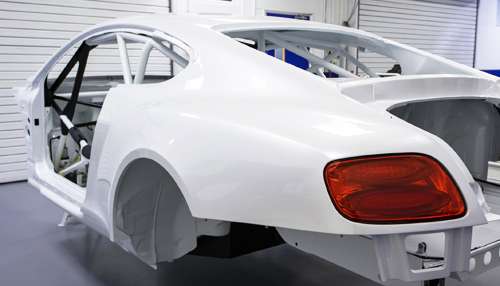 After 10 long years, Bentley readies its return to racing

Bentley’s racing history goes back 90 years before its last win and last run in 2003, but whether the promise of today can outdistance the performance of the past remains to be seen.
Advertisement

Whatever the results produced by the team consisting of Bentley racing, M-Sports Ltd (technical support) and the workers at the assembly plant in Crewe, it will deserve an A for effort.

The Bentley GT3 Racer Concept debuted at the Paris Auto Show last year, and was based on the iconic Continental Grand Tourer, but is evolving thanks to rigid dedication to the racing genetics developed across the last century.

“Motorsport is an integral part of Bentley, and the performance and endurance qualities of all of our road cars reflect this racing heritage,” stated project leader Brian Gush, Bentley’s Director of Motorsport. “Not one single part of the GT3 has escaped our attention, and the result is a car that can compete with the field in terms of factors such as power, weight and aerodynamics.”
Notably, Gush was the last man to take the company to victory in a Bentley racer during Le Mans in 2003.

Next, they’ve added double wishbone suspension, four-way adjustable dampers and competition brakes to the chassis system, cutting more than a ton of fat from the Continental GT road car.

This was done by removing all the parts and equipment that make the road car so conspicuously luxurious – including ECUs and numerous electrical systems extraneous to the racing game.

Even the Continental GT doors have been replaced by racing versions, weighing an eighth as much as its street legal cousin’s.

What hasn’t changed is the exhilarating silhouette of the road car, though the doors, trunk lid and hood are handcrafted from carbon fiber. A roll cage, conforming to FIA specifications, has been added to the body to more than double its rigidity.

Similarly the drivers seat is molded from carbon fiber and exquisitely trimmed and seamed by the skilled workers at the Crewe factory, along with the racing steering wheel and door pulls, just like a Continental GT road car.

Even if Bentley doesn’t win its next race, its presence will further validate the winner’s accomplishment. Should Bentley win again, it’s something that has been a long time gone, not to mention a long time coming, as well.