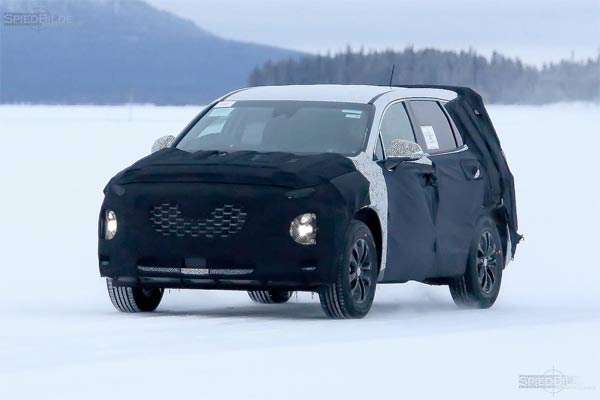 How Hyundai Start The Big Push For New Crossovers

There are big styling and line up changes coming to the Hyundai crossover sector as seen by the latest spy shots.
Advertisement

Hyundai's next-generation Santa Fe was spotted out in camouflage cold weather testing recently in Sweden, giving an indication of what the crossover model will be like for 2018 and possibly 2019. The images show a newly designed front-end which has a honeycomb grille, an update from the horizontal bars on the last model, headlights that are now in two sections an upper LED light and a further light setup on both sides of the grille.

Other indications point to the test mule also having a larger rear which points to a much larger crossover than expected. This could also mean a move to an eight seater, rather than the current seven passenger model. The design cues also point to a more rugged styling, possibly to compete against the likes of Jeep.

These design upgrades follow spy shots which include Hyundai bringing in a new compact B-segment crossover for 2018, along with the Santa Fe and Santa Fe Sport being split up into two separate entities moving forward. An eight seater crossover is also expected in 2019, with its own nameplate. There are also reports that Hyundai may be making the Tucson larger which will leave room for small crossovers in their lineup.

It's clear that Hyundai want to expand their crossover offerings and match competitors across the board moving forward. Hyundai's strongest suit is in the sedan market, so it's no surprise that crossovers are now being tested in the wild to be released in the next year or two.

The current Hyundai Santa Fe has a popular styling with Hyundai's renowned economy and full feature set, but the company need to expand the whole range if they are going to take on the best in the rest of the segment.

The company also have plans for an all electric long-range SUV, which makes sense when considering the full IONIQ Electric range of vehicles. A small to mid-size electric SUV has been spotted recently, but there is no official word from Hyundai about the model. Last year Hyundai past CEO Dave Zuchowski stated that the company plan to release five hybrids, four plug-in hybrids, four electric vehicles and a fuel cell vehicle by 2020, with a possible unveiling for 2018.

It's clear that Hyundai are currently very busy trying to expand their current range of crossovers and possibly expanding the line with EV vehicles in the next few years. The company have had criticism about relying too much on their sedan lineup, so anybody wanting a wider range of choice from Hyundai in the future should stay tuned for future updates.