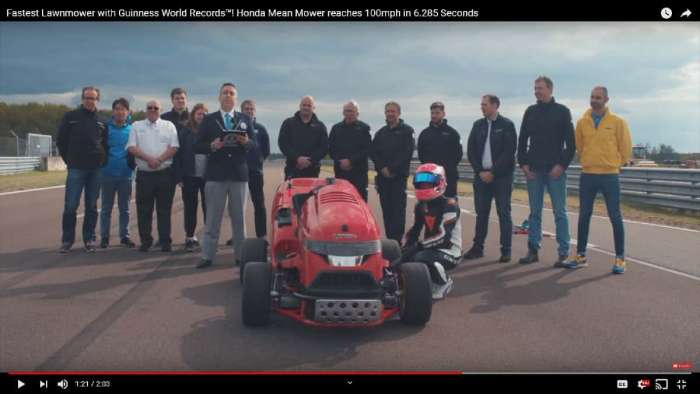 Would You Believe A 150 MPH Lawnmower? Honda Has One

Honda has an interesting Skunk Works, you know, the place where interesting automotive engineering issues are proposed. A couple of years ago, they put together the Mean Mower V1, a lawnmower that was supposed to his 100 mph and more very quickly. The automaker did, but someone else did an even quicker job. Now, Honda's back with an even quicker MM V2. It hits100 in a little over 6 seconds and tops out at 151. You have to wonder how long it would take to do your yard (you can, you know).
Advertisement

Way down in the secret Skunk Works at Honda – below the new-car development folks, the racing contingent with their wildly screaming powerplants, the motorcycle area with its special two-wheelers – there’s another little-known division, the lawnmower division.

They are out to prove that they can out-crazy, crazy. A couple of years ago, they put together what, at that time, was the world’s fastest riding lawnmower (Mean Mower V1). It was a rather special machine that could reach 116 mph in seconds and topped out at 134. Mean Mower V1, their first entry in the weird world of high-speed lawnmowers, was a Guinness Book record-holder for a bit, until an even more crazed individual tuned another lawn flyer that went even faster.

Lawnmower Division Had An Answer

Never let it be said that the crazies in the lawnmower division didn’t have an answer to the mower that challenged the Honda version. It took more work to turn the mower into the “Mean Mower that can.” In doing so, they managed to put Mean Mower V2 into the Guinness Book of Records as the fastest mower to hit 100 mph. It took 6.29 seconds to hit the century mark.

For starters, while the Mean Mower V2, had to satisfy the 0 to 100 mph record, it was honestly pushed well past that mark. Jess Hawkins, a stunt/race driver, managed to ring things out, pushing the 300-pound rocket to its top speed of 150.99 mph. Imagine taking a 309-pound rocket screaming down the track – or your local lawn – it’s quite something especially as the mower has a huge power-to-weight ratio that is said to be better than a Bugatti Chiron, one of the world’s fastest supercars.

The Honda team carefully followed the requirements laid out by Guinness. The mower did have to look like a lawnmower, and it did have to cut grass. The developers used parts from the Honda HF2622 lawn tractor to achieve that result. They used the front cowl, grass box, and body panels. To make it all work, the development team also modified the cutting deck, batteries, and electric motor system that powers the carbon-fiber cutting blade. Because there’s no suspension or damping, handling the MM2 is an exercise in fortitude. The HF2622 Lawn Tractor Was Their Starting Point.

Now, does MM “intrinsically look like a lawnmower,” the Guinness’ super-mower standard? Honda thinks so. It has all the attributes, plus a great engine note.