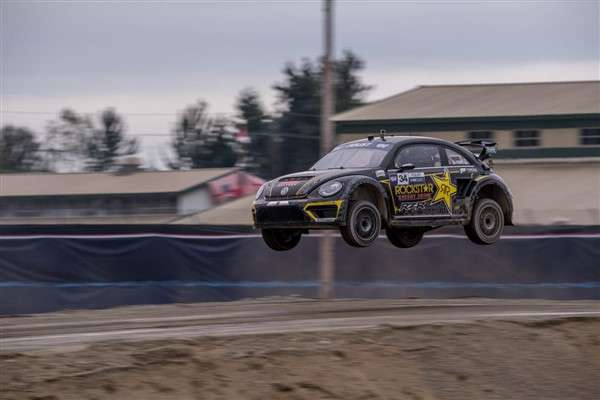 Not only has the VW Andretti Red Bull GRC team clinched Manufacturer's Championship for Volkswagen, it looks as if the season finale in Los Angeles in October will be the race that determines which racer ends up on top.
Advertisement

Subaru Takes Third in Seattle Weekend.Tanner Foust had a perfect weekend as his No. 34 Rockstar Energy Drive Beetle GRC topped the field on Saturday and Sunday’s events in the latest round of the Red Bull Global Rallycross (GRC) in Seattle. Things came together nicely the driving duo that races for the Volkswagen Andretti GRC racing team as they scored a pair of one-two finishes in the weekend event at Seattle’s Evergreen Speedway.

Foust scored victories in the Finals of both ends of the doubleheader event that saw his teammate Scott Speed, the pilot of the No. 41 Oberto Circle K Beetle GRC, take two second-place finishes in the events. Speed’s two second-place finishes delivered him more championship points as the racers head into the season finale in Los Angeles. Speed drove a pair of competitive and smart races as he protected his lead in the points race. Subaru Takes Third in Seattle Weekend.

Foust had a good weekend as he reversed the troubles that kept him from getting on the podium at the last Red Bull GRC event in Atlantic City. Foust’s driving was almost textbook. His pair of victories Saturday and Sunday made him the winningest driver on the Red Bull GRC circuit, taking the title from Speed who took it in Atlantic City. The Volkswagen Andretti team drivers have been trading the title all season long.

Foust’s performance on Saturday more than overcame the troubles he had in Atlantic City where his bid to gain more championship points ran aground, and he slipped to third place in the driver standings. He has now leapfrogged into second-place behind Speed who has a big lead in the driver’s championship. At the moment, Speed sits 30 points ahead of his teammate, and he is 74 points ahead of the third-place driver. Los Angeles, site of the final race of the season, has a total of 81 points available to contestants. Both drivers are in position to take the driver championship by winning the Semifinal and Final in Los Angeles, a single event. Seattle was the last doubleheader of the racing season.

Except for a bit of trouble in the first qualifier on Saturday that put him further back on the grid, Foust was smooth. He overcame the bit of trouble and went on to win the Semi and the Final, Foust’s Sunday was a similar story, though without the issues. Foust started off strongly in the prelims – Qualifier and Semi -- gaining championship points. His performance put him in the front row for Sundays Final, where he was beside his teammate Speed.

Foust has a brilliant start

Foust’s start was excellent, working from the outside position on Row 1. He managed to slide past his teammate on the dirt section of the course, taking the lead, a position he refused to yield to his teammate Speed who was a short distance back. The pair pulled away from the field as they scored their 1-2 victory, the fifth and sixth time they accomplished the feat this season.

“Seattle has been a great place for me to race over the years, but this weekend was really special,” Foust said in an interview following his tour of victory lane to pick up his second trophy of the weekend. “Taking back-to-back wins like that is just we needed to do for the championship, and I’m super-proud to deliver these trophies for my crew who have worked super hard all year long.”

Speed, who entered the race with a sizeable points lead, kept his eye on the prize during the weekend as he was determined to win as many points as possible without taking unnecessary risks. He did just that, posting a pair of second-place finishes. He achieved his goal by some smooth driving.

“Even though we didn’t win in Seattle, this was still a very strong event for the No. 41 Oberto Circle K Beetle GRC crew,” Speed said after picking up his second-place hardware. “We grabbed tons of points, and we’re in a really good position for L.A. We’ve always had luck there, so I think we’re in great shape for the finale.”

The teammates and competitors square off next month for the championship when the Red Bull Global Rallycross Championship moves down the West Coast to Los Angeles. The event is slated to air on Oct. 14 at 4:30 p.m. (EDT)