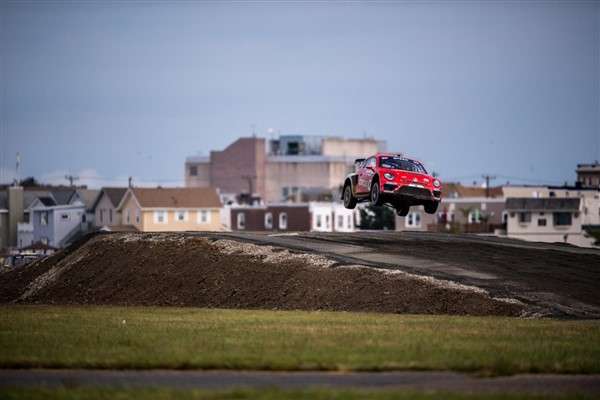 The Volkswagen Andretti Red Bull Global Rallycross team pulls into this week's next-to-last race of the season with one driver hoping to increase his lead in championship points but with the other hoping he can close the gap. Since the start of the season, Scott Speed and Tanner Faust have traded the number one position in the driver standings in a closely fought contest. Last month's Atlantic City event changed the picture considerably.
Advertisement

With the Red Bull Global Rallycross (GRC) bandwagon pulling into Seattle Saturday, Scott Speed, leading the championship points race, hopes to build on his success so far this season and move further away from the rest of the field.

That competitive field includes Tanner Faust, who is trying to regain momentum and keep pace with Speed. Both drive for the Volkswagen Andretti Rallycross team. Mike Andretti, the scion of the famed racing family, has again teamed with VW to put a pair of competitive Beetles on GRC venues across the nation. The effort has again proven successful as the team has already locked up the second consecutive Manufacturer’s Championship for Volkswagen. VW clinched the championship at the last GRC outing in Atlantic City last month. Faust hopes for redemption in Seattle Red Bull GRC event.

Speed is back on top of the championship standings thanks to his three consecutive race wins. His dominance in the last three outings has given already put him into the record books as the series’ winningest driver. That title bounced between the VW driving duo until Atlantic City.

At Atlantic City, Faust ran into nothing but trouble as he didn’t podium during the doubleheader event. His problems cost him as he fell back into third place in the driver standings. Faust us focusing on gaining ground on Speed. Speed’s whose smooth, steady driving has put him into a position where he can amass an insurmountable lead if he takes both halves of the season’s last doubleheader. The Seattle event kicks off Saturday afternoon at 4:30 p.m. (EDT). The second race is Sunday at the same time).

“This is our last doubleheader of the season, and it will be important to grab as many points as possible before heading into the LA final,” Speed said in an interview this week. He is the driver of the No. 41 Oberto Circle K Beetle GRC.

“If we stay out of trouble, I’m confident that we’ll be in good shape, but anything can happen in rallycross, so we’ll be pushing hard to be at the front of the field to better control our destiny,” Speed continued.

Atlantic City, as noted, was not helpful to Faust as a combination of bad luck and the rough-and-tumble of rallycross, caught up with him. “Atlantic City was a tough weekend on my side of the garage, but I know that we can bounce back and achieve better results in Seattle,” the driver of the No. 34 Rockstar Energy Drink Beetle GRC said when interviewed.

“Last year’s event was awesome both from a results perspective and a great and enthusiastic fan turnout, so I’m hoping to replicate that again this weekend, ” he concluded.

The event marks a change of livery for Speed’s Beetle. Once again, it will sport the iconic red, white, and green Oberto livery, celebrating the brand’s home race.

Seattle is home turf for No. 41 Beetle

Oberto colors made their debut on the No. 41 Beetle GRC last year in Seattle. Speed is eager to perform well in front of the supportive crowd.

“It will be great to have some of the Oberto folks join us at the track this weekend,” the driver enthused. “We’ll be putting in a lot of effort to make a great show, so we hope to come out of this home race weekend with a pair of top finishes.”