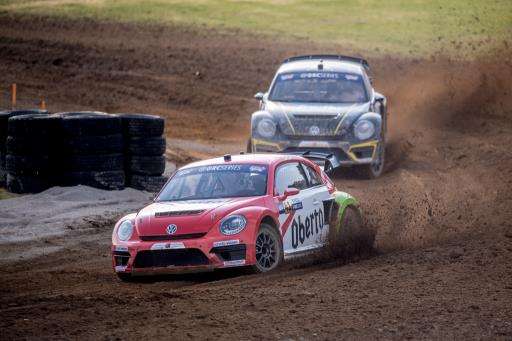 Off to a successful one-two finish in the first GRC tour stop in Memphis, the VW Andretti team is optimistic that their momentum will carry them to a second win at this weekend's inaugural Louisville rallycross event.
Advertisement

With a strong start in the 2017 Red Bull Global Rallycross season, the Volkswagen Andretti Rallycross team pulls into Louisville this weekend, the obvious favorites to pull off at least a couple of visits to the podium, if not another victory.

At the season’s inaugural run in Memphis earlier this month, team drivers Scott Speed and Tanner Foust dominated the weekend with victories in the Heats and finals. The pair scored the first one-two victory of the season for VW Andretti. They hope to continue their winning ways at GRC’s second stop of the season in Louisville.

At the first stop, reigning two-time champ Scott Speed’s start of his title defense was nearly flawless. He earned the pole, and two Heat wins on his way to his win in the first Final of the season. Speed, driver of the No. 41 Oberto Circle K Beetle GRC was jubilant with his team’s first effort of the season.

“We came out of the gates strong in Memphis,” he emphasized in an interview. “I’m super proud of the team effort that saw us make so much progress in the offseason. I think we proved that from far taking things for granted, we improved a lot and that should help our odds for the rest of the season,” he continued. “If we can win two races on the trot, it will be a great start to our championship defense, but now it’s time to put on the blinders and focus on the task at hand this weekend.”

Tanner Foust placed well in Memphis. Despite a new race format that made the path more difficult, Foust still finished second in the Final. He managed to set the second-fastest qualifying time on his way to winning one Heat, before his second-place Final finish. Foust pilots the No. 34 Rockstar Energy Drink Beetle GRC.

Foust Proud of his finish in the first race

“It was good to finish in the money for our first race of the year, but I’m hoping we can raise the stakes in this second race,” Foust told an interviewer. “Last year, we saw that every point matters in the championship, so I’m hoping to make the most of this event in Louisville.”

Making things more interesting in this weekend’s stop, the track site has some interesting twists. The Volkswagen Andretti Rallycross crew will be racing on a temporary dirt and tarmac circuit at the Kentucky Exposition Center. The .699-mile ring features tight corners and the signature Red Bull Global Rallycross tabletop jump that launches the field into the air as they hit it.

Foust is looking forward to the race on the new venue. “Obviously, Louisville has a pretty big tradition of horsepower, so it’s exciting to bring a different form of racing to this city,” he emphasized.

The second round of the 2017 Red Bull GRC season airs live on local NBC stations Sunday at 1 p.m.