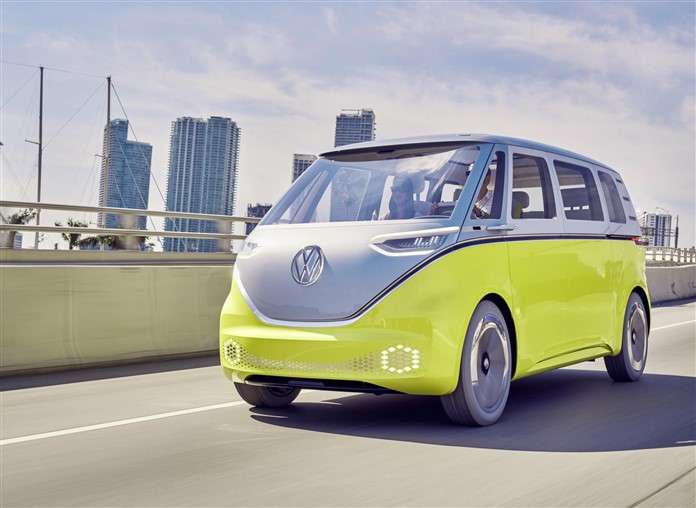 Torque News has learned more details about the upcoming Volkswagen I.D. Buzz electric vehicle. Planned for 2022, the Buzz owes much of its design to the iconic Volkswagen Microbus that generations of hippies, surfer dudes and others loved back in the 1960. The update, though, has size advantages when compared to two popular vehicles, the Honda Odyssey and Ford Explorer.
Advertisement

Torque News has learned more details about the I.D. Buzz that Volkswagen has confirmed will be built. The automaker used the Pebble Beach Concours d’Elegance as the announcement’s launch pad late last week. At that time, company officials noted they were responding to overwhelming customer demand for the at-the-time concept vehicle. VW Dealers To Receive ID Buzz In 2022

Volkswagen unveiled the I.D. Crozz concept at the Detroit Auto Show earlier this year as an example of the type of electric vehicle that it could develop with the MEB platform. Ultimately, plans call for three electric vehicles to be developed using this platform, the ID Buzz multipurpose bus/van, the ID hatchback, scheduled for introduction in 2020 or earlier, and the ID Crozz SUV/crossover, slated to join the line by 2025. With its announcement, VW has cemented the plans in place. VW made the official announcement at last week's Pebble Beach Concours d'Elegance. ID Buzz Announced at Pebble Beach

Many Cues From The Famed VW Microbus

If you look closely at the I.D. Buzz, you’ll see it takes many of its cues from an iconic vehicle, the VW Microbus of the 1960s and 70s. The Microbus cemented its place in history with hippies, surfers, and people who valued lots of space. It’s apparent that VW is looking to cement the I.D. Buzz place in history as another iconic vehicle. It’s quite a vehicle. It seats eight; has Level 3 autonomy (the commercial version which pretty much drives itself), and is an all-electric. VW says it will be available for the 2022 model year.

“The Microbus, which is what the Bulli is called in America, has always been part of the California lifestyle,” Herbert Diess, Volkswagen chief exec, said in a statement. “Now we’re bringing it back by reinventing the Bulli as an electric vehicle.”

CEO of the North American Region, Volkswagen, Hinrich J. Woebcken added: “We are delighted that our parent company has taken the decision to produce the I.D. BUZZ. This vehicle is the perfect balance between emotion, usability, and sustainability, while also showcasing our technological leadership. The high seating position, cargo capacity, overall versatility and all-wheel-drive option packaged into such an appealing design is just what our customers want from us. And it’s the perfect fit for the zero-emissions American lifestyle.”

At 194.5 inches long, the Buzz has a size advantage. It is 8.5 inches shorter than Honda’s Odyssey. It is four inches shorter than a Ford’s Explorer. VW plans to build the Buzz in Hannover, Germany. Interestingly, this is the same plant where the automaker produced all earlier versions of the van, six generations worth.

Batteries I.D. Buzz Will Be In Floor Allowing Flexibility

Just like the concept car shown in Detroit, the production model will also have its batteries mounted in the vehicle floor. Because the electric drive components -- electric motor, power electronics, and such -- don't take up much space, the vehicle has a long wheelbase with short overhangs, allowing for a massively spacious interior and great proportions. "The vehicle looks like a compact commercial van on the outside, even though it offers the generous interior space of a large SUV," Diess explained.

As in the classic T2, the I.D. BUZZ will both haul people and haul freight. "Along with a minibus version, we'll also be offering an I.D. BUZZ CARGO variant for zero-emissions delivery of goods,” said Volkswagen Commercial Vehicles CEO Dr. Eckhard Scholz. "With Level 3 autonomous capability, this is an ideal concept for an electric van, particularly for delivering packages and goods to the inner cities." The concept vehicle used two motors that yielded 369 horsepower. Its range was about 270 miles.