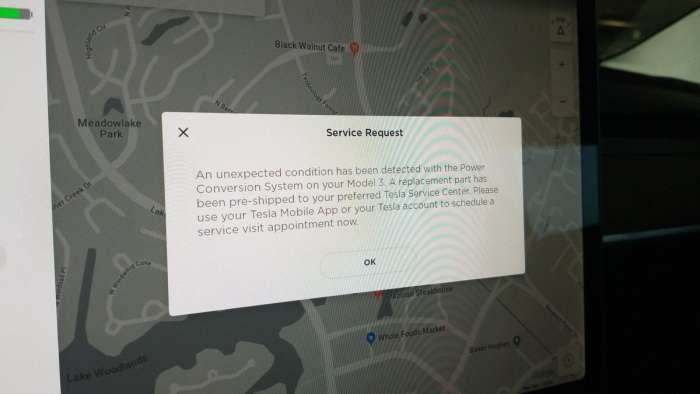 Tesla Innovates: Pre-Order Your Bad Parts (Wow, What An Idea, Or Not)

Tesla has always been a leader in innovation. They revived the factory-owned and operated car store successfully. They update their software over-the-air as soon as it is tested. And, now, to accommodate your flats and other mechanical issues, they let you pre-order the bad parts just so you can be ready.
Advertisement

There’s little doubt that Tesla Motors has been an innovator when it comes to automobiles. For example, when they first went on sale, service appointments were set and at the appointed hour, a Tesla rep appeared and whisked the car away for its appointed services (at least you can forget about oil changes with an electric; lube jobs not so much).

And, then there was the matter of sales themselves. Instead of using a franchised dealership like Ford or Chevy or Honda, each of which is owned by someone other than the manufacturer. Tesla, instead, owns all of its stores, which has upset more than one dealer group across the country. State after state has launched attempts to control or block factory-owned car stores to foil Tesla’s sales philosophy with some success.

And, then there are software updates. Instead of having to drive back to the dealership each time for a software update – there have been many – Tesla believes in floating software updates through the airwaves to each of its products and updating the software in that manner.

And, in another first, Tesla will now allow you to pre-order your Model 3’s faulty parts, automatically.

Wow, imagine pre-ordering a punctured tire so that you can have it flat before it happens. If this sounds weird, you should see the notice that a Tesla owner discussed on RREDIT recently.

The notice begins with the innocuous, but an informative statement: “An unexpected condition has been detected with the Power Conversion System on your Model 3.” Then comes the innovation: “A replacement part has been pre-shipped to your preferred Tesla Service Center …”

The Tesla world lit up over the idea. Here’s a sample of just what they had to say:
Love it.
We need to reduce Service Center wait times, but this is an excellent start.
level 2
frowawayduh
Owner

264 points · 3 days ago
We need that for collision repair parts.
(Too soon?)
level 3
igbright
Owner

You mean, predict collisions and order the parts needed to repair expected damage ahead of time? Now that would be something...
level 4
FinndBors
445 points · 3 days ago

“You are a terrible driver and keep too close to the car in front of you. We have pre-ordered a front bumper and shipped it to your nearest body shop in preparation for the inevitable. Have a nice day.”
level 5
kidovate
102 points · 3 days ago

I think this is 10x funnier because it's completely plausible. Just wouldn't be worded this way
level 6
AntalRyder
38 points · 3 days ago

It wouldn't be worded in any way, but I can see stock numbers being adjusted accordingly in the future. Someone driving millimeters from parked cars on their right every day? N+1 right side body panels stocked at their preferred location.
level 7
NerfJihad
16 points · 3 days ago

well, first, you'd have to have an "ideal" traffic pattern through any given interchange.
Then, you rate individual drivers by their individual deviations from this ideal, and that's your personal compliance graph. Basically, it indicates how hard the AI would have to work to fix how you drive. Crowding, braking too hard because you're not paying attention, ignoring or delaying maintenance, missing turns, illegal maneuvers, accidents, near-misses...
all of these things would not only be trackable, you could literally see the worst driver in the world in realtime once the telemetry suites hit saturation like android phones did.
level 8
DiggSucksNow
Tesla Fan
4 points · 3 days ago

By the time the AI could reliably fix human drivers, there won't be human drivers.
level 6
em_el_jee
8 points · 3 days ago

I thought it was funny because my first interpretation of the sentence was that faulty parts are ordered. Took a second read to get it right.
level 5
Mmilazzo303
30 points · 3 days ago

We have pre-ordered an entire car because you drive like you’re bat shit crazy.
level 6
guocity
Owner
11 points · 3 days ago

That’s in 2 years when tesla insurance kicks in, and newly ordered car show up in your front door next day, tesla truck automatically tow the old car to recycle. Sounds crazy?
level 5
FisterRobotOh
29 points · 3 days ago

“You are a terrible driver and keep too close to the car in front of you.”
”Mr Musk believes no child should be placed in danger. Your children will be placed in the custody of Tesla.”
1 more reply
level 5
Jewishcracker69
5 points · 3 days ago

Your crash... is inevitable
level 4
shorty_shortpants
28 points · 3 days ago

Not at all. Maintaining stock is inefficient compared to just in time part shipping. Just hard to do that with collisions.
level 6
MortimerDongle
27 points · 3 days ago

Tesla should have reasonable data on how often parts are being ordered and produce the extra parts needed.
Virtually every other manufacturer has good parts availability, it's not a hard problem. A short wait is fine, but it should be on the order of days, maybe a week - not months.
level 7
blotto5
Tesla Fan
15 points · 3 days ago

I remember when I got into a crash with my 2014 Ford Focus a few years ago. Body shop was able to get all the parts in a day except for the hood. They had to repair everything else and leave the messed up hood on it for me to drive until they got the part from Ford. Took 5 weeks. On a Focus. And those things are everywhere.
level 8
MortimerDongle
13 points · 3 days ago

Absolutely, sometimes that happens, but it shouldn't be the norm.
level 8
TheMightyBattleCat
Model 3 Reservation Holder
8 points · 3 days ago

That's harsh.. In a developed country we get either a courtesy car from the bodyshop or a hire car from the insurance until all the work is finished.
level 9
InterdimensionalTV
2 points · 3 days ago

Ive been in 2 accidents here in America, one my fault and one the other ladies. In the first one where I wasn't at fault the body shop deemed my car unsafe to drive and I got a rental that insurance paid for MOST of. In the second one I just had some screwed up body panels and just dropped off the car as needed when parts came in and were ready. The second one was much cheaper despite me being at fault because there was no rental deposits and payments so I'd much rather temporarily drive a dinged up car.
level 10
Zaknafeinn
1 point · 3 days ago

The trick is that normal insurance covers whole rental and not only most of it (if acccident wasn't your fault), for as long as you need to wait till a car is fixed. You may buy additional insurance that works the same if you were at fault.
2 more replies
level 8
Rylet_
Model
|
3 points · 3 days ago
Did you check the junk yard for one?
1 more reply
level 6
thro_a_wey
2 points · 3 days ago

I keep hearing this. How inefficient can it possibly be?
Same goes for assembling cars, it seems much more efficient to say "woops one supplier didn't come through, now we can't make any cars at all for 6 days". It's better to have a buffer..
2 more replies
level 4
pixel4
3 points · 3 days ago

This probably wouldn't work for major crashes causing frame/subframe damage, but fender-benders that only damage body panels, should be easy to detect and automatically order parts.

I mean once self driving becomes incredibly reliable, amd every car uses it. Then, the only accidents will be planned.
level 3
SDIESEL
Owner
11 points · 3 days ago

Heck, I'm still waiting for a windshield that was broken at delivery, 1.5 weeks ago. I'm now at the point where legally I'll have to pay for an inspection sticker to go on that window, just for it to be thrown away so that I can pay for a replacement sticker.

maybe put a clear film over the entire windshield like a clear window tint and then go get the inspection sticker, so you can remove it later? maybe the clear film is cheaper than the inspection?
level 5
rich000
LR
3 points · 3 days ago

The replacement sticker isn't that expensive, it is just an annoyance.
3 more replies
level 3
kontekisuto
3 points · 3 days ago

but then if it fails, and orders all new exterior parts, now what?
level 2
Okienotfrommuskogee8
14 points · 3 days ago

This should help with that. Techs can spend more time working on cars and less time ordering parts.
level 2
z0mbietime
8 points · 3 days ago

Their approach for me was canceling my service appointment and saying a mobile technician would come look. Then, ghost on me when I asked about when the tech intended to come. So I call only to be told to make a service appointment....
level 2
KaloyanP
2 points · 1 day ago

This is the holy grail of maintenance - literally every company that makes machines is looking for ways to do this.
This is the way to maintain jet engines, steam turbines, trans-continental trains, wind turbines, figher airplanes - basically any asset of significant commercial value. The fact that Tesla could just push it out via OTA on a whim while every other company has to run a 2-3 year programme to embed something similar says something about Tesla's approach to building software!
This announcement will, unfortunately, go over the heads of most Wall st. analysts.
1 more reply
level 2
The_Red_Maple_Leaf
1 point · 3 days ago

It could be good and bad. Like what if you are out of warranty and they just send you a giant bill without any warning.
1 more reply
level 1
umtsaumtsa
Model 3 LR AWD x 2
380 points · 3 days ago
That’s...that’s pretty damn
cool.
level 2
sbowesuk
104 points · 3 days ago

Doubt it according to their business model. They’re going to keep all the Model 3 to use in their robo taxi fleet. Hence after the 3 year lease you can’t buy the car.
level 6
arharris2
Model 3
50 points · 3 days ago

People buy cars and then get a new one after a year all the time. Tesla keeping cars only applies to leases. There will definitely be used ones available.

However, the new leasing strategy should mean that Tesla’s retain their value better than other brands due to scarcity of used vehicles.

Marc Stern is a long time reporter for Torque News and you can follow him on Twitter @iraradioguy.

DeanMcManis wrote on May 8, 2019 - 11:15am Permalink
This sounds like a nice convenience for Tesla cars under warranty. Both for the dealer and for the customer. If the car's onboard diagnostics detect a failed part (as long as it is not a safety issue) then it automatically sources and ships out a replacement part to your local dealer for repair. That way the dealer doesn't have to keep a huge inventory of replacement parts locally, and alternately you do not have to wait a long time for the parts to be delivered to the dealership after the mechanics have diagnosed the problem.