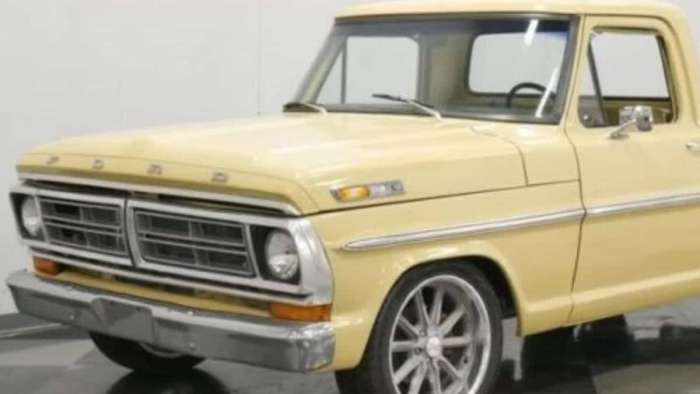 Sometimes There's More To An F-100 Than Meets The Eye

Sometimes there's much more to what looks like a great antique truck than meets the eye. That's the case with this 1970 Ford F-100 that was restomoded by the Icon Restomod, a West Coast restorer.
Advertisement

Like most vehicle owners, I have a certain amount of nostalgia for older vehicles – not too much because I also write about new pickups, as well. For example, not too long ago, I wrote about Ford's F-150 Lightning.

The Lightning was built by Ford's Special Vehicle Team (SVT) to compete with Chevy's 454SS.

More To Lightning Than Meets Eye

Ford built the first generation from 1993 to 1995. The first-gen LIghtning's powerplant was a 240-horsepower naturally aspirated V-8. The SVT made extensive mods to the front and rear suspensions as the Lightning featured much lower lines.

The first-gen Lightning went out of production in 1995. After a lapse of five years, the specialty pickup came back as a lowered Flareside model.

Icon adds modern upgrades to its vintage makeovers while keeping the classic style intact. The latest vehicle to get a special one-off restomod treatment is a 1970 Ford F-100.

Referring for a moment to the Lightning again, it was a Ford, factory-back specialty model, unlike the F-100. The F-100 was a standard 1970s Ford pickup that Icon restomoded (restored to a modern model, hidden in a classic body). The California restoration house Icon takes what appears to be classics and rebuilds them into modern vehicles. In the following video, borrowed from Hagerty Auctions, you can see what I am talking about.

The F-100, in this case, is powered by a current Coyote 5.0-liter V-8 that cranks out 426 horsepower. The power is handled by Ford's AOD automatic. To be sure that it sounds just right, Icon uses a Borla exhaust system.

The four-wheel-drive pickup is ready for off-road use as Icon equips it with a twin-stick Advance Adapters Atlas II transfer case. Also, the F-100 uses Dana axles front and rear to handle the task.

Very little is left to chance as Icon used a new frame and suspension in its restomod process. Also, the restorer uses Eibach springs and Fox Racing shocks to soak up the bumps and dips in the road. Other changes include new front radius arms and a four-link rear.

On the inside, the seats sport a mix of leather surrounds with fabric inserts. Icon dresses up the seats to look like originals. Another touch is the gauge cluster. Though it seems like a stock unit, it isn't. Instead, it is a new gauge package from Dakota Digital.

Icon has also given the restomoded F-100 new sound. Instead of using the former AM receiver that sat in the dash, Icon installed a Bluetooth audio system.

Icon Restomod, according to info from their website, is a West Coast firm that handles some surprising builds. They take older models – primarily Toyota Land Cruisers and Ford Broncos – and turn them into new models hiding beneath older bodies. Though this is their primary market, the company has also completed unique items out items like a Chevy Caprice police car and a 1949 Mercury with a Tesla powertrain.

DeanMcManis wrote on May 26, 2020 - 5:09pm Permalink
I always like restomod vehicles, as long as they are affordable. I have many of my older cars that I have upgraded with various newer mechanical items that update older designs and outdated engineering. My 1959 Kamann Ghia had a 36HP 1300cc engine that managed a top speed of 56MPH, and I updated the old 6 volt generator with a 12V alternator, swapped in front disc brakes (they were a factory option in later models), low profile tires on wider wheels, and put in new seats, and a 120HP engine, and "freeway" gearset, plus an updated (hidden) stereo. So now it's a far better car to drive, even though purists will hate any updates. I like the fact that there is a demand for restomodders to modify these updated classic vehicles, but once their prices creep into six-figure price ranges, then they are just a curiosity to me, like any other toy for the super rich. It does get me thinking however about looking for home restomodded cars where some skilled home mechanic spent years creating their updated dream car, which now sets on eBay for less than it would cost to buy the parts alone.
Marc Stern wrote on May 27, 2020 - 10:31pm Permalink
You know what? I agree with you 100 percent!! Thanks