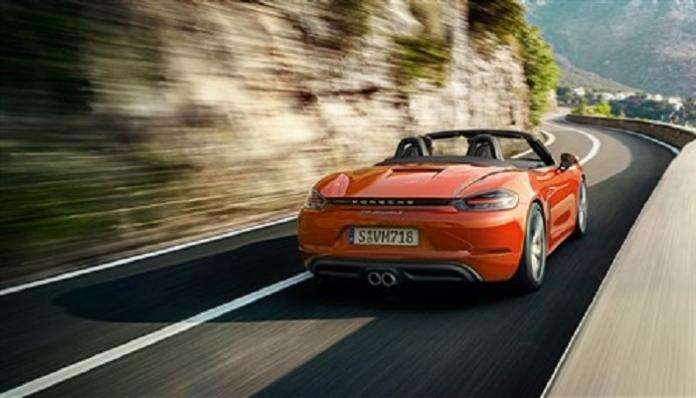 Porsche has announced the addition of top-of-the-line GTS models to the 718 Boxster and 718 Cayman lines. The new models not only feature specialzed interior and exterior treatments but also improved engines and transmissions, as well as other handling improvements.
Advertisement

The mid-engined Boxster GTS and the sporty rear-engined Cayman GTS models come standard with six-speed manual transmissions. A seven-speed dual-clutch automatic is available as an option.

In addition to the freer-breathing engine and turbo changes, there are a number of performance-enhancing features such as Porsche Torque Vectoring (PTV). The PTV package includes a special that makes handling crisper and more positive.

The engine changes have broadened the power band and have increased available torque up to 317 pounds-feet in automatic transmission models, 309 in manual transmission-equipped models. The added torque is available across a broader power band. The power band on automatics is 1,900 to 5,000 rpm, while on manuals it is 1,900 to 5,500 rpm. Using the seven-speed, dual-clutch automatic, 0 to 60 times of 3.9 seconds are possible with 180 mph top ends

New visual cues set the GTS models apart. They include unique front fascias with tinted front indicator lights and taillights. The GTS models also include individualized logos – in black – in black along lower rear panels. The Sports Exhaust System features black tipping on the center tailpipe. The black-accent theme continues with logos on the doors and matte black 20-inch wheels.

On the interior, the Sports Chrono package features a chronometer mounted on the center of the dash panel. Porsche used \Alcantara upholstery on the centers of the seatbacks. Alcantara trim is used on the steering wheel rim, center console armrest and door armrest. The headrests include stylized GTS embroidery logos. The headrests were also engineered to provide high lateral support and comfort.

A unique tech feature of the Sports Chrono Package is the Porsche Track Precision App. It is an app that turns a smartphone into a driving analysis tool. It lets drivers display and analyze data obtained from closed courses on smartphones. For more information on apps, look here: Porsche app information is available.

Dealers are now taking orders for the 718 GTS models. The vehicles should arrive at dealers by next March. Pricing for the Cayman GTS is $79,800, and the Boxster GTS is $81,900.
Source: Porsche