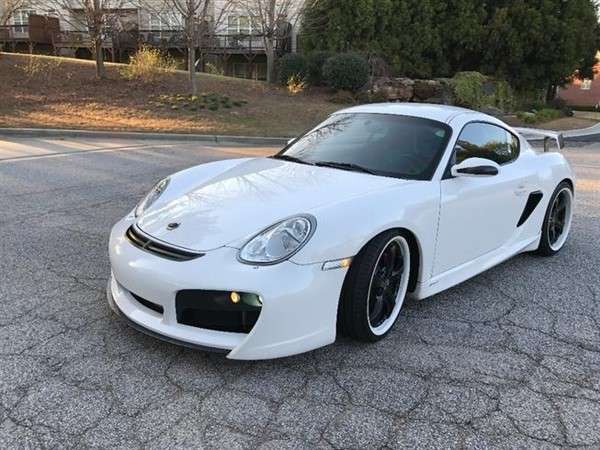 Want A Piece Of “Fast And Furious?” There’s A Porsche Cayman That Fills The Bill

Flipping around some internet auto sites recently, we came upon a very special Porsche listing. Believe it or not, one of the "Fast and Furious" cars is for sale. It is the Porsche Cayman S, driven by Gal Gadot in "Furious 4." Gadot, if you don't know, is the star of this summer's hit movie "Wonder Woman."
Advertisement

If you are into the “Fast and Furious” (FF) movies very deeply, you probably know that there was a point where things seemed a bit out of place. For one reason or another – that isn’t very well explained anywhere I looked – the producers thought they needed to add an almost-prequel that tied FF2 and FF3 together, bringing the storyline into balance.

Producers May A Pre-Prequel

So, the producers of “Fast and Furious” made FF4. It was the one that explained Letty’s “death” in more detail, and it tied up some loose ends. For instance, they tied up how Dom and Brian became involved with a notorious drug lord. And, then there was the whole Letty thing. She agreed to go undercover for Brian, who was an FBI agent, seeking to bring down the drug lord. She was “killed, ” and Dom and Brian fell out. Letty – Dom’s girlfriend – wasn’t truly killed; just severely wounded. Neither Briand nor Dom – the principal protagonists in the FF franchise – knew of the fake murder. It nearly ended their friendship, but it did cost Brian his badge as he and Dom (Torreto) ran back to Mexico to get the drug lord. Finally, rather than run as the police closed in, Dom decided to take a moral stand that resulted in his jailing. It also resulted in Brian and the crew breaking him out of jail so he could prove his innocence.

Part of the plot of FF4 involved a pair of drivers who toured street racing venues for the best. When they found two drivers, they were hired to make a run for the drug lord from Mexico north. One of the minor plot points of the movie was the 2007 Porsche Cayman S Sport. Its driver was one of the scouts. Interestingly, as it turns out, Gal Gadot played this part in the 2009 movie. If her name seems familiar, she went on from this relatively minor role to become a superhero of whom you may have heard,
Wonder Woman. Gadot plays the hero in “Wonder Woman,” which did quite decently at the box office during the summer.

In FF4, though, she was far from a good guy. She and her partner picked the drivers who took the contraband north to the U.S. When they finished their runs they became liabilities, ending up on the wrong side of a gun. The cartel then needed new drivers, and so the hunt for talent began again The cartel certainly chewed up lots of drivers, but it also let Brian and Dom, who was, at this point, grieving Letty’s death, get into the drug lord’s operation. Only later did Dom find out about Brian’s use of Letty as an undercover operative which put them on opposite sides of that issue.

That’s pretty much all we need to touch on plot points for this article. Let’s get back to the Porsche; it is the reason you’re reading this article. In its listing on Autotrader, the Cayman has 36,700 miles on the odometer. The current owner purchased it when there were 8,000 miles on the clock. The rear-engine/rear-drive sports coupe uses the durable Porsche flat-six that has been around since the 1970s. The engine feeds a manual transmission.

According to Autotrader, where the Cayman is listed, the film runners invested a pile into the Cayman, $45,000 or more. Here’s what the money purchased:

Equipment Is For Show And Go

It’s a load of equipment, right? If you look at the list of equipment closely, you should notice something. The FF4 runners decided that Cayman had to show and go well (the Cayman did go part well already, they wanted it improved).

The “show” part is easy to figure as the TechArt add-ons gave the Cayman a great look. Indeed, they were most accessible parts to see. They let you know that the Cayman was one mean vehicle.

The “go” parts, on the other hand, wouldn’t be noticeable unless you looked for them – okay, the transparent engine cover helped, but only if you knew what to look for. In this case, it’s the IPD Competition Plenum (freer-breathing) with the 82 mm GT3 Throttle Body Conversion Kit. When those changes combine with the Evolution Motorsports V-Flow, you have a bodacious machine.

The seller also upgraded the front brakes with Stoptech pads and OEM rotors. The brakes were also extensively reworked to include stainless brake lines all around. And, the owner added carbon fiber hydro-dipped side vents.

It’s an interesting find on Autotrader. It is the type of find that lets you in on a bit of auto and film history for a reasonable price, at least it’s reasonable for now.