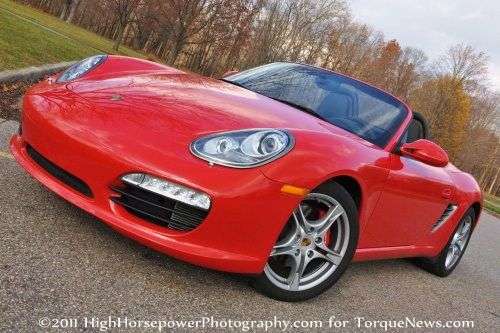 The Porsche name is well known for being among the most well respected performance/luxury brands in the world and while the 2012 Boxster S is Stuttgart’s "entry model" – this car is a beautiful example of what Porsche can offer to those who are looking for a European sports car sans the six figure budget.
Advertisement

The 2012 Porsche Boxster S is also known as the 987 and since 2009, the Boxster has been sporting the look (and power) of the second generation 987. The key exterior feature of the 2012 Boxster S is the front fascia which shares a similar styling to the other models in the lineup, including the bright eyed dual-projection headlight assemblies with long horizontal driving lights mounted in the cooling openings of the lower fascia. When the headlights are on, the driving lights serve as foglights but when the headlights are off, these low-mounted lights offer a cool looking daytime running lamp. The headlights are molded into the high rising fenders; looking very much like the Cayman, Panamera and Cayenne along with the previous 911 – which has now been replaced by the refreshed 2012 911.

Along the sides, the 2012 Boxster S features silver painted air intake openings and silver painted split-spoke 18” wheels wrapped in high performance tires. Behind these sharp looking wheels is a set of drilled rotors pinched under bright red painted, Porsche label performance brake calipers. When the black canvas top is up, the car has a sleek roofline although the vehicle looks far more natural with the top down – but that is true of every soft-topped convertible on the market. Once that canvas top is tucked into the rear end of the car, the form of the Porsche supercars from which the Boxster was designed becomes far clearer.

Out back, the 2012 Boxster S sports a set of large, sweeping LED taillights with a small spoiler tucked between that rises out of the body at speed – or with the push of a console-mounted button. The lower fascia area wears a set of contrasting splitters that improve aerodynamics and add style with the large, center mounted dual exhaust looks awesome and sounds even better.

When you climb into the 2012 Porsche Boxster S, you are greeted by a sporty set of leather seats (that are both heated and cooled) nestled down in what is a surprisingly roomy cabin. The mid-engine design of the Boxster puts the engine behind the driver and passenger so there is no back seat of any kind and what little room is behind the seats I occupied by a portion of the incredible Bose sound system. However, even in this tight cockpit there is plenty of leg room for both the driver and passenger along with a fair deal of elbow room and head room (when the top is up). The design of the interior really makes the cabin feel bigger than it is and with the driver’ seat adjusted all the way back, there is enough room that I couldn’t get the clutch all of the way to the floor so someone who is over 6 feet tall should be able to comfortably enjoy driving or riding in the new Boxster.

My daily driver is a quad cab pickup so moving to something as small as the 2012 Porsche Boxster S is a tough transition as when I had a passenger with me, there wasn’t room in the cockpit for a laptop case or camera bag. However, much in the same way that the Boxster makes the most of what interior space it has, the engineers in Stuttgart made sure that the front and rear storage compartments make up for the lack of interior storage space. The front storage space (under the hood) is incredibly deep and while it’s not incredibly large side to side, there is enough room to fit a couple small suitcases for a weekend trip. On the more practical side of things, there is also enough space in the front storage compartment to fit a pretty significant number of grocery bags, should you want to take your new Boxster shopping. The rear storage compartment (or trunk, if you prefer) is much larger side to side than the front storage area but it is not as deep so out back, you can stow larger flatter items and in the front you can put tall, narrow items. Within reason, there probably aren’t many things that you could put in the back seat or trunk of an average coupe that you couldn’t fit in the 2012 Boxster S. For comparison, the Chevrolet Corvette also does not have a back seat or a real area in the cabin to put “stuff” and while the Vette has a trunk, it doesn’t offer nearly the storage space that the Boxster does even though the Corvette is a much larger car.

While the interior offers a very high quality look and feel, the 2012 Porsche Boxster S isn’t packed full of excessive gadgets like you find in some vehicles with very simplistic center stack holding the controls to the navigation/sound system along with the dual zone climate control. Unlike many vehicles, the Boxster doesn’t have a steering wheel cluttered with buttons that control a bunch of items that are easily within reach and while I like being able to control the radio channel and volume from the steering wheel; I like the clean, simple look of the Boxster’s steering wheel. Overall, all of the controls that you really need are easily accessible when driving while the bright touch screen mounted in the center stack offers fluid control of the Bose sound system.

Speaking of which, I have driven a great many cars from automakers all around the world and I don’t know that Ive experienced a factory stereo system like the Bose sound system in the 2012 Boxster S. The sound quality is impeccable regardless of the type of music that you prefer - from classical to hip hop and everything in between. Thanks to the subwoofer design being built into the rear wall of the cockpit, the Boxster sound system booms when turned up - with the bass hitting as hard as many aftermarket sound systems and crystal clear sound quality all the to the highest volume setting available. Bose produces some incredible sound systems and the one featured in the 2012 Boxster S is an incredible example of what happens when you put a system that will provide enough sound for a concert hall into a compact sports car.

Last but certainly not least is the electric convertible top of the 2012 Porsche Boxster S which is among the most user-friendly drop top systems I’ve used. There is a large button mounted above the rearview mirror that says “Push” and when you do, the large silver handle wrapping around that button pops up. You push that silver handle back against the top and with the simple push of the console-mounted button, the top quickly retracts into the rear cladding. The top turns into its own tonneau so there is no need for a bothersome cover that you have to stop and get out of the trunk but even in the absence of the extra cover, the Boxster looks fantastic with the top stowed. Also, the system is so quick that you can have the top down and be ready to drive in less time than you spend sitting at an average stoplight.

The Porsche Boxster had been criticized in the past for not looking enough like the other, better performing Porsche supercars but since the refresh for the 2009 model year, the Boxster features the same sleek styling theme as the rest of the lineup. The interior is fitted with comfortable sport-inspired seats and all of the amenities that you would expect from a high end luxury model, combining high quality fit and finish with modern technology in an affordable European sports car.

Check out our gallery of the 2012 Porsche Boxster S and click here for part two of our review where we look at the drive review of the high performance German roadster!