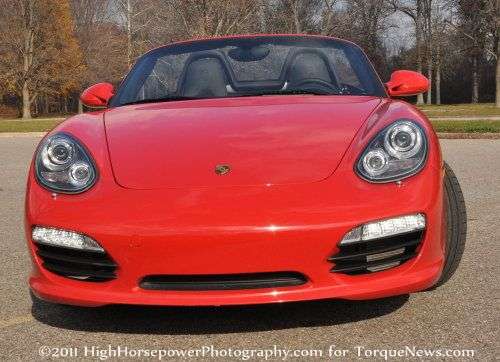 The 2012 Porsche Boxster S drive review: 0-Awesome in under 5 seconds

The 2012 Porsche Boxster S is a great looking car with a surprising amount of passenger and cargo space but the most exciting part of the Boxster S is driving it...as whether blasting down the highway or cutting along a twisty country road - the 2012 Boxster S provides an incredible rush.
Advertisement

This is part two of our review of the 2012 Porsche Boxster S where we take a look at the driving experience of the topless German sports car. Click here for part 1 where we took a closer look at the design and interior layout of the Boxster S.

It only takes a few minutes of driving the 2012 Porsche Boxster S to know that this is truly a driver’s car. As soon as you fire up the 3.4L Boxster engine, the rumble of the engine right behind you serves as a precursor to the driving excitement that you are about to experience. The exhaust tone of the Boxster S is interesting, as when you first fire it up, the engine offers a very proud idle but when you are cruising around town at low speed and low RPM, the engine is incredibly quiet. However, when you crank into the RPMS - and the 2012 Boxster S LOVES the big RPMs - the engine and exhaust make your presence known with a roar that should bring a smile to the faces of even the proudest V8 lovers. While some may look at the fact that the 2012 Boxster S “only” has 310 horsepower and 266lb-ft of torque, with a curb weight under 3,000 pounds and an aggressive gearing setup applied to the mid-engine design, the Boxster is willing and able to keep up with some of the fastest V8-powered vehicles on the road. The weight distribution allows the rear wheel drive Boxster to get excellent traction on a hard launch and when the tires do spin a bit, Porsche’s traction control system engages to settle the wheels down without slowing the car down a ton like some other automakers’ traction aides. The Boxster surely wasn’t designed and built to be a drag car but in my experiences, it will easily hold its own against most of the new cars sold in America today.

When you launch the 2012 Porsche Boxster S hard from a stop, the car moves out quickly and it becomes very obvious that this is a very quick little car but when you get into the higher RPM range - the 3.4L Boxer engine truly shines. The Boxster S pulls hard between 4,000 and 7,000 RPM, and when you shift from gear to gear the engine speed drops very little so the acceleration is steady throughout the gears and power band. Even when cruising on the open road in 6th gear at 70mph, when the need arises to pull out and pass another vehicle - or to simply hand a Corvette owner his pride in a neat little package - the Boxster is very happy to quickly climb well past the century mark while providing an always luxurious and comfortable ride. While some vehicles can feel increasingly unstable as speeds get higher and higher, the Boxster S feels just as smooth and confident at 100 as it does at 65. Also, no matter how fast you are going, the Boxster seems to always want to go faster…as if the 3.4L engine just behind the cockpit is acting like a devil on your shoulder - just begging you to put the pedal to the floor and test the 160+ mile per hour top speed.

One other aspect of the 2012 Porsche Boxster that I really enjoyed was the 6-speed manual transmission. While the 7-speed dual clutch automatic transmission known as the Doppelkupplung might offer slightly better performance numbers than the manual transmission, the clutch and gearbox in the Boxster S are designed for someone who loves to bang their own gears. The clutch is tight and very responsive; unlike many of the spongy clutches on the market that are designed more to aid uncoordinated drivers than they are designed for a great feel. While this might not be an ideal clutch for someone who is relatively new to the third pedal system, the Boxster’s transmission system is beautifully designed for optimal fun-to-drive factor. When you pull the shifter from gear to gear, the shift pattern is incredibly tight and gears are easy to find when shifting quickly during spirited driving. Under normal driving conditions, shifting requires very little effort and when you push the Boxster into the high RPMs, ripping from gear to gear is sure to put a smile on the face of any competent driver.

The suspension of the 2012 Porsche Boxster is stiff and the steering is very acute so while the Porsche provides the type of comfortable ride that one would expect from a modern high end luxury car, it also enables the Boxster S to yield incredible handling properties. On rough roads, the Boxster does have a little rougher ride than some might want but for someone buying a German sports car, the suspension does exactly what is designed to do…offer incredible cornering abilities and surefootedness at high speeds. The chassis and suspension design allow the Boxster to handle better than many new cars on the road today, to the point where it almost difficult to put this car into a situation where it doesn’t feel comfortable. For instance, when entering the highway on sharp cloverleaf turns, the Boxster is easily able to traverse these long, sweeping turns at speeds well exceeding the posted highway speed limits without any suggestion of body roll or the car wanting to break loose. While I didn’t get to spend any track time behind the wheel of the Boxster S, the twisty roads where I pushed the handling of this Porsche weren’t enough to find a limit to its capabilities and shy of the 2012 Ford Mustang Boss 302, I believe that the Boxster S could be one of the most impressive cars I’ve driven in terms of handling.

The 2012 Porsche Boxster S may not have the high powered turbocharged engine, an advanced all wheel drive system or the massive price tag that other Porsche models come with but to suggest that the 2012 Boxster S is anything less than a premium sports car is foolish at best. Even with “just” 310 horsepower, this is a car that will go toe to toe with just about any performance car sold in the United States and at least put up a good fight…if not send the other driver home an unhappy loser. The Boxster shines in every aspect of performance but it offers these incredible measures in a great looking package that also has an interior that is roomy, luxurious and comfortable.

If you are the kind of “sports car driver” who doesn’t want to feel the road or really have engagement with your driving experience, the 2012 Porsche Boxster S probably isn’t for you. However, if you are the kind of driver who loves the feel of the road at high speed and who lusts for the roar of the engine as you tear along the highway - this is a car that is marketed to you as an affordable luxury sports car and it delivers on every single level.

The Porsche Boxster has earned a slightly negative reputation for not packing the power and performance that some people expect from the Stuttgart supercar builder but don’t let the compact size and naturally aspirated 3.4L Boxer engine lead you to believe that this car is anything but a pure European sports car. The Boxster S really offers everything that the Porsche name has become synonymous with including great handling, impressive acceleration and world class quality with a price tag similar to some of the higher end American sports cars. If you are lusting for the luxury and high performance of the Porsche brand but you want to stay away from the six figure price range – the 2012 Porsche Boxster S is a car that most certainly be on your short list.

Click here for part one of our 2012 Porsche Boxster S review including a gallery of interior shots and stay tuned to TorqueNews.com for all of your latest automotive news and reviews!

Patrick Rall is a professional writer and photographer with a passion for all things automotive. Patrick has been sharing his automotive expertise in automotive journalism from Detroit for more than a decade covering the Big Three. Having grown up in his father’s performance shop, he spent extensive time at the oval track and drag strip – both driving and wrenching on various types of vehicles. In addition to working as a writer, Patrick previously worked as an automotive technician before moving on to a business office position with a chain of dealerships, and this broad spectrum of experience in the industry allows him to offer a unique look on the automotive world. Follow Patrick on Facebook, Youtube and Twitter. You can read most of Patrick's stories at Torque News Porsche and Dodge reports.