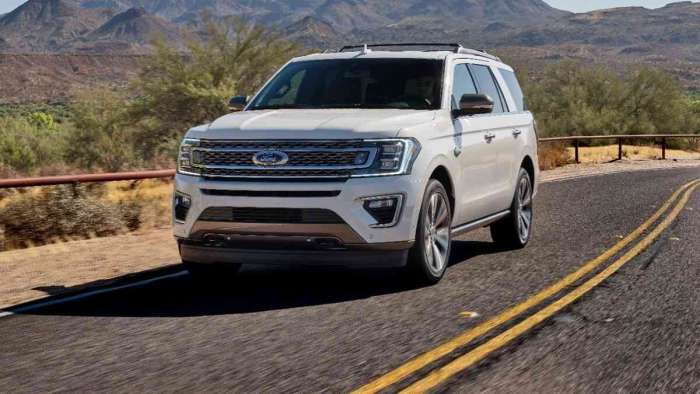 Ford has recalled Super Duty pickups for a problem with the panoramic camera used in its 360 system. At the same time, it has recalled more than 277,000 SUVs for the risk of fire.
Advertisement

This has been a tough week if you own a Ford or Lincoln SUV. The automaker has recalled nearly 200,000 SUVs that may catch fire because of a blower motor problem.

The affected vehicles are the 2015-2017 Ford Expeditions and its corporate twin, the Lincoln Navigators.

The paperwork filed with the National Highway Traffic Safety Administration (NHTSA) identifies the troublesome part as a front blower motor "located behind the glovebox may fail" and catch fire.

According to Yahoo Auto News, more than 24 fires have been reported, blamed on the motor. There has also been one injury.

Ford will notify owners of the affected SUVs on Sept. 12. At that time, owners can bring their vehicles to their dealers for the free repair. The automaker will replace the front blower motor.

Ford has been dealing with fire-related recalls recently. In May, said Yahoo Auto News, the carmaker recalled some 2021 Ford Expeditions and Lincoln Navigators for underhood fires. Ford investigated this problem and found the problem.

In July, the fire recall was expanded to include Ford Escapes, Mavericks, and Lincoln Corsairs.

In a second major recall, Ford has recalled more than 277,000 Super Duty trucks and the Lincoln Continental luxury sedans due to a camera problem. A coating on the camera lens can become foggy, obscuring the image.

Ford began its probe a year ago with reports of poor camera performance. Looking closely at the problem, the automaker found that a thorough lens cleaning didn't fix the issue. Ford looked closely at data from vehicles in service. Specifically, the automaker looked at camera weathering. The problem found that an inner lens could experience cracking of the anti-reflective coating. A couple of weeks ago, Ford okayed the fix for the problem.

Ford says it isn't aware of any crashes or injuries related to this problem. The recall affects 100 percent of the vehicles named because they all have a faulty coating.

The recall covers Super Duty pickups built between 2017 and 2020. It includes the Continental. The pickups are equipped with the Ultimate Trailer Tow Camera system.