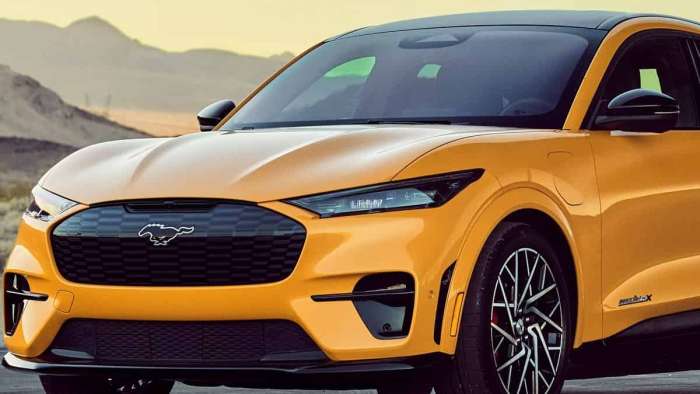 February was another strong month for Ford sales. With the numbers in, it looks like the Mustang Mach-E is making some serious headway against competitive brands and the Ford F-150 PowerBoost is doing beating the opposition.
Advertisement

In what must be super-encouraging news for Ford Motor Co., Ford's groundbreaking electric sales, the Mustang Mach-E helped push overall electrified vehicle sales to a February record. Sales were up 56.1 percent over a year ago to 9,267 vehicles sold.

During its first full month of sales, Ford moved a total of 3,739 Mustang Mach-E models. Nearly 70 percent of Mach-E orders are from competitive brands, and just over one-fifth of sales of the EV was from California. With good strong sales in February, the Mach-E also had a recall to tighten subframe bolts after a subcontractor failed to tighten them. I covered the issue here.
Meantime, Mach-E's are taking market share from other brands. My colleague John Goreham disusses the issue in-depth here.

Sales of F-series pickups gained both retail sales and market share. Thanks to the all-new F-150 and F-150 PowerBoost Hybrid, Ford's F-Series retail share was up an estimated five full percentage points in the full-size pickup segment. Retail sales were up 7.9 percent.

Andrew Frick, vice president, Ford sales U.S., and Canada, said that the all-new "F-150 PowerBoost Hybrid and the fully electric Mustang Mach-E lifted Ford to an all-new February electrified vehicle sales record." Altogether, "the all-new Bronco Sport and Mustang Mach-E worked to deliver our best February Ford SUV sales in 20 years." He acknowledged that for Ford dealers, their newest products have "been game-changers in the electrified vehicle and SUV space for our dealers and customers."

Sales of the all-new F-150 PowerBoost Hybrid jumped 40 percent relative to January. Ford and its dealers made substantial use of the F-150's onboard electric generator to provide power to Texas residents.

The Lincoln Navigator achieved its best February sales performance in 14 years. Navigator sales were up 20.8 percent in February on total sales of 1,715. 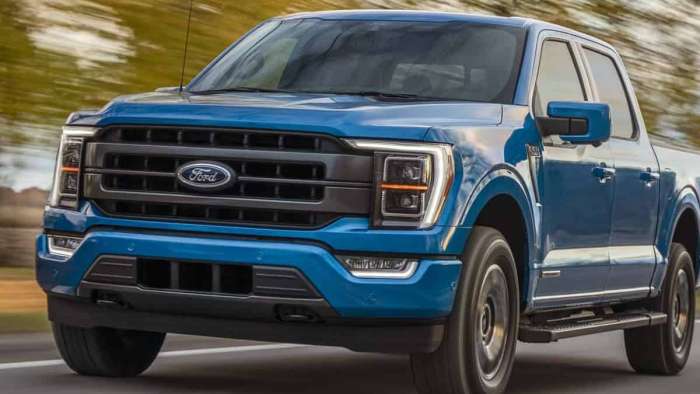 Sales of the full-sized F-650/750 (full-sized) more than doubled in February, with sales up 142.9 percent over last year. This represents Ford's best February sales performance for these Class 6 and 7 trucks since 1997 with 1,686 trucks. Sales of Ranger to commercial customers climbed 41 percent.
The all-new F-150 continues to post strong days-to-turn on dealer lots at 19 days. With an F-150 PowerBoost Hybrid offered for the first time, truck buyers learn of the added feature of onside power generation and improved fuel economy. F-150 PowerBoost Hybrid sales were up 40 percent over January.
Ford Bronco Sport sales totaled 5,526 SUVs in February. Customers loved the rugged styling and the expressive retro design. Bronco Sport is bringing in a more active lifestyle customer, with 56 percent of customers opting for the trailering package to mount accessories and towing ATVs, motorcycles, and campers.
Mustang Mach-E
The first full month of Mustang Mach-E sales totaled 3,739 vehicles, and they are turning off dealer lots in just four days. Customers say they like the Mach-E for its styling, performance, and technology. Nearly 70 percent of Mach-E buyers are from competitive brands. Mustang sales climbed 30.7 percent from January.
Strong retail sales gains helped to propel Lincoln Navigator volumes to levels not seen in 14 years. Sales expanded in the southeast by 21 percent, while Navigator sales grew 12 percent in the West. Black Label accounted for 21 percent of retail sales for the month.

Tesla-Funded Research Reveals One of The Biggest Mysteries of EV Battery
Tesla Tesla Buyer Nets a Whopping $12,000 Discount After Asking for Reduction
END_OF_DOCUMENT_TOKEN_TO_BE_REPLACED