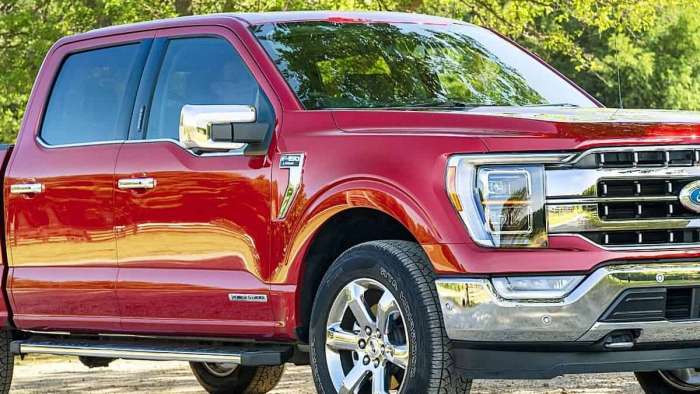 The 2021 Ford F-150 is only the second large pickup to earn a major safety award from the Insurance Institute For Highway Safety.Thanks to improved headlights, the SuperCrew and Extended Cab versions of the pickup join the Ram 1500 as winners of the Top Safety Pick Award.
Advertisement

When you look at issues that might knock down a vehicle's safety level, one area that most people don't look at is the headlights. After all, headlights have been parts of cars and trucks for longer than 100 years.

The Insurance Institute for Highway Safety (IIHS) marked the F-150 down for its headlights. This year, though, improvements in the pickup sports' headlights have raised the F-150 to the IIHS Safety Pick level.

According to the insurance safety organization, the changes to the headlights have caused the top-selling vehicle nameplate in the country to join the Ram 1500 as the only large pickups to earn the 2021 award from IIHS.

The 2020 models of the two large pickups fell short of an award because those vehicles' available headlight systems earned poor ratings. The 2021 editions of both vehicles are now available with good or acceptable headlights on some trim levels. However, a poor rating for the base halogens with certain trims prevents them from earning the plus level.

The standard and optional front crash prevention system available on both trucks has earned superior ratings in the vehicle-to-vehicle evaluation. In the vehicle-to-pedestrian evaluation – which is very important for large pickups due to their size and weight – the standard, camera-only Ford Co-Pilot360 Assist 2.0 has earned an advanced rating.

Award Applies To Both Vehicles

LG's New EV Battery Plant Is a Welcome News for Tesla
Tesla Giga Berlin's New Hurdle: It's Not Only the Gov't, but Now Tesla Itself
END_OF_DOCUMENT_TOKEN_TO_BE_REPLACED