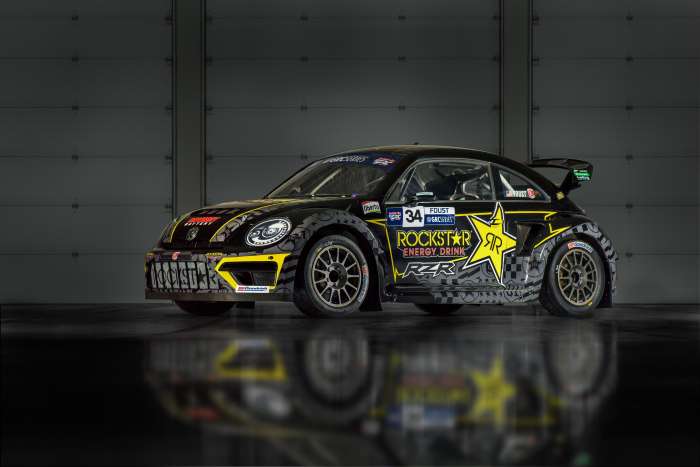 Drivers Return To Campaign Pair Of Beetles For VW Andretti

Renewing a competitive partnership for 2017, Scott Speed and Tanner Foust are returning for a fourth consecutive year to drive with the Volkswagen Andretti Rallycross racing team.
Advertisement

Ready to rock for another season, the Volkswagen Andretti Rallycross team has announced that their winning drivers, Scott Speed and Tanner Foust will be piloting a pair of competitive VW Beetles in the 2017 series.

Back-to-back series Speed has also hooked up with a new sponsor this year. He will be driving the red, white and green No. 41 Oberto Circle K Beetle GRC, while two-time GRC champ Foust will return to the fray in a new-look No. 34 Rockstar Energy Drive Beetle GRC.

The drivers are returning for their fourth season with the Volkswagen Andretti Rallycross team. The drivers hope to repeat their success in the 2016 campaign. Last year, Speed won his second-consecutive Red Bull GRC title, while Foust set a record for 25 consecutive Heat wins on the way to a second-place championship finish.

Speed welcomes Oberto All-Natural Beef Jerky and Circle K onto the No. 41 Beetle GRC. Previously, the company’s branding appeared on Speed’s Beetle GRC for the Seattle Round of the 2016 championship.

An excited Speed said he is “excited to have Oberto on the car this year, and I’m sure that we’ll share some of the same success we were able to enjoy together last year. We’ve been working hard to improve our cars over the off-season, and I can’t wait to get to racing so we can defend our title again.”.

In the three-year history, the Volkswagen Andretti Rallycross team has become a dominant force on the Red Bull Global circuit. By winning eight of 12 races in2016, the squad earned VW its first-ever Red Bull Global Rallycross Manufacturer's Championship and achieved a second consecutive driver’s title for Scott Speed. Overall, the team has 18 wins and 26 other podium finishes in the series.