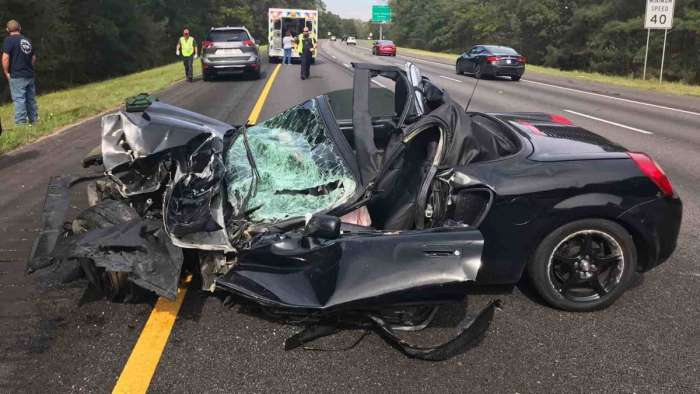 Driver Walks Away From Brutal Toyota Crash With Just Scratches

A Boston area driver walked away from a brutal crash last week with only bumps and bruises after his 2001 Toyota MR2 was involved in a brutal crack-up on Interstate Route 95. The operator swerved to avoid an item that flew out of a pickup bed and ended up in collision with a semi-trailer. The image speaks for itself.
Advertisement

One look at the crash last week on Interstate 95 south of Boston would leave you with the idea that no one could have survived the smash-up. Indeed, looking at the mangled 2001 Toyota MR-2 was almost more than one could bear. The crack-up left the body crushed and the roof collapsed, leaving little more than toothpicks. The whole scene looked as if an Abrams A1M1 battle tank hit the vehicle. Toyota Engineers Safety Into Each Model Line

So, How Did The Driver Fare

Indeed, it would be fair to wonder whether the driver survived the crash in good shape? Well, Torque News is happy to report that the driver did escape serious injury in the accident, suffering only from a few cuts and bruises. He did go to the hospital to have his injuries checked, but he was quickly treated and released for minor injuries.

The incident began as Scott Shepherd tried to avoid a bucket that launched from the bed of a nearby pickup. The bucket fell into the traffic lane after the truck cut Shepherd off. Things went from bad to worse at this point. Losing control of his mid-engined two-seater, Shepherd’s vehicle then smashed into a semi. As it did, the M2 suffered significant structural damage; even the fabric top fell in and surrounded Shepherd. He couldn't get free easily because the steering wheel blocked his exit. Using his shoe, Scott managed to exit the very broken MR2 through the remains of the convertible roof.

Now, there are those out there who probably believe it was pure luck that Scott escaped the vehicle without large dents of his own. However, it was more than sheer good fortune. The MR2’s engineering team built lots of safety into the two-seater. Indeed, Scott had nothing but praise for them. “Kudos to Toyota engineers,” Scott enthused because “I shouldn’t be here right now.” As pointed out by Motor1.com, this particularly nasty crackup shows you the progress Toyota has made regarding safety. Even as far back as 2001, Toyotas were saving their operators from serious injury by major smash-ups due to safety engineering.

As to the MR2, Toyota phased it out back in 2007, after three generations. Lately, though, the automaker has been dropping hints that the MR2 may be back. If it does return, it is likely that the MR2 would fit into the niche between the 86 and the revived Supra.

Rob wrote on May 10, 2019 - 10:05pm Permalink
Love my 2019 Toyota Rav4! Love Toyota cars/trucks. But not much love for my dealership, Sun Toyota. They sold us a top of the Line, Limited Rav4 w/o our requested (in writing) for Limited Weather & Limited Technology pkgs. Their finance/sales officer said,"Don't you have enough cameras in your car, already? What do you need with a 360° camera and all the other stuff, anyway? This was to cover over his gross negligence of our Rav4 order. We wouldn't recommend any of our family or friends shop at that particular dealership ever! The bait & switch tactics they used on us, was nightmarish! But, if given the chance again. I would use an online buying service, that way you do not have to go through too many human beings to get the trim level, plus options and color Rav4 you desire. Jeff, keep doing what you do best, giving us "burned-customers" hope for a better deal and dealership, to sell you your desired Toyota Car, SUV, or Truck that you desire. Our motto: "Keep customers happy,Then, they will return!"