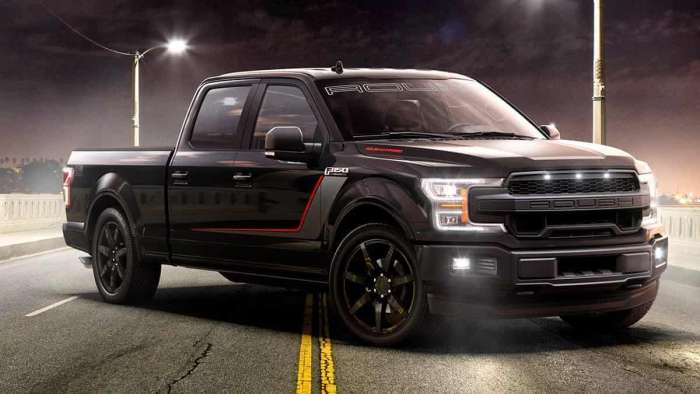 Though Dodge probably doesn't want this one to see the light of day, we have to report that a very well-tuned Ford F150 went to the drag strip line against a Dodge Challenger Hellcat Redeye and while you may think the Dodge took both runs, it didn't as the F150 dusted the Hellcat in the second run.
Advertisement

We all know what the SVT guys at Ford did with vehicles like trucks and cars. They lowered them or lifted them; and boosted up their power with turbos or superchargers, making fire-breathing monsters out of them. And, then they turned them loose on the public which greedily scooped them up. Who can blame them, either?

The SVT group was a gang of motorheads who thought nothing was better than taking a go-kart, for instance, and making it super-quick. Of course, we don’t know whether they tried boosting a go-kart, but, we do know they worked on and created the Ford F150 Lightning a few years back. It was one such vehicle. There was no doubt that the V-8-powered Ford F150 was a screamer. Indeed, the automaker quickly sold out of its allotment of Lightnings whenever they came on the market. Today, dealers could easily find themselves short on Raptor allocations. The Raptor, Nightmare, and other or similar vehicles that are likely to make Ford aficionados drool.

Given that background, is it any wonder that folks like Roush take Ford F150s, drop-in blowers, and make them the competition's worst "Nightmare." – also the name of the Roush performance truck. Dealers have been known to turn Ford F150s into "Nightmare-like" power trucks themselves. Roush will turn any model F150 -- single-cab, SuperCrew, or SuperCab -- into screamers, as well. Nightmares recently took the mark as the fastest accelerating trucks around, not long ago.

You don’t have to be a Roush either to make your Ford F150 into a fire-breather. According to a video that surfaced this past weekend, distributed by The Ford Authority, an F150 single-cab owner turned his pickup into a monster that he has named the Undertaker. If you observe the video, you will see what happens when he rolls up to a drag start line – a 10-second quarter mile.

That’s not all. The Ford F150 uses American Racing headers, Ford Performance wheels, and steering wheel. Here are a couple of things we don’t know about the F150:

Interestingly, the video makes no mention of either item. However, when you think of the engine, it does make lots of sense that the engine’s a V-8. It doesn’t make much sense tuning an EcoBoost 3.5-liter V-6. It wouldn’t stand a chance against on a drag strip.

Now, here’s the fun part: the owner of the Undertaker ran his Ford F150 against a Dodge Challenger Hellcat Redeye. The Redeye is stock. As stock vehicles, Hellcats feature tremendous performance. Running on drag radials, Hellcats are low-flying missiles. Each launch from the line did have the Dodge Hellcats getting away first. However, the Hellcats weren't the winners of each heat.

Each Vehicle Has One Win

It happened each time they came up against one another at the drag strip. The Challenger was first off the mark. However, the F150, with all of the power of Whipple-based blown engine available, soon began to reel in the Dodge. The Hellcat did win the first pairing. The second run shows the blown Ford F150 laying down a 10.3-second quarter-mile despite being beaten off the line as it ran to victory.

By Marc Stern: I have been an automotive writer since 1971 when an otherwise normal news editor said "You're our new car editor," and dumped about 27 pounds of auto stuff on my desk. I was in heaven as I have been a gearhead from my early days. As a teen, I spent the usual number of misspent hours hanging out at gas stations Shell and Texaco (a big thing in my youth) as well as working on cars. From there on it was a straight line to my first column for the paper, "You Auto Know," an enterprise that I handled faithfully for 32 years. Not too many people know that while I was writing YAN, I also handled computer documentation for a good part of my living. My best writing, though, was always in cars. My work has appeared in venues including Popular Mechanics, Mechanix Illustrated, AutoWeek, SuperStock, Trailer Life, Old Cars Weekly, Special Interest Autos and others. You can follow me on: Twitter or Facebook

Sourcing: The source for today's Ford F150 piece is The Ford Authority. One of the top sites for Ford news on the internet, The Ford Authority often has news about F150s weeks ahead of other sites. We also list our other source today as research. Research is top-level information that we have pulled out of various sources as part of the article preparation.

carlos santizzo wrote on September 18, 2019 - 8:56am Permalink
I am a FAN of Ford vehículos My passion began in the early 50's 1955 with the T-Bird. later with Grand National and F-1 with the Cosworth engine today I am 73 and still enjoying Baja 1000, IMSA GTLM, and races in Europe, Australia and Argentina; following Ford race cars
Marc Stern wrote on October 3, 2019 - 9:50pm Permalink
Sounds like you are a real Ford fan, Great. ;)

Tesla-Funded Research Reveals One of The Biggest Mysteries of EV Battery
Tesla Tesla Buyer Nets a Whopping $12,000 Discount After Asking for Reduction
END_OF_DOCUMENT_TOKEN_TO_BE_REPLACED