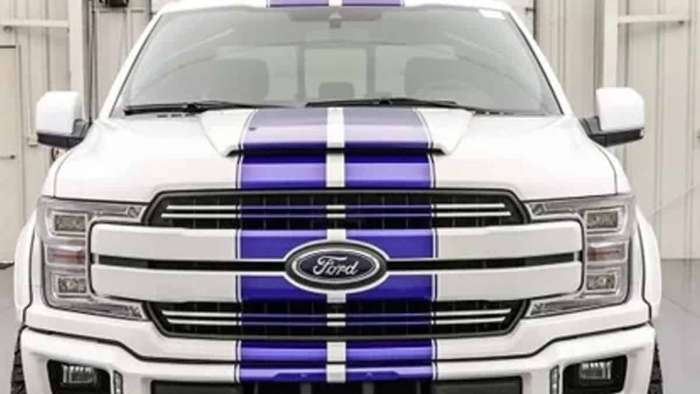 Long-McArthur Ford of Salinas, Kansas, has done it again. This time, the dealer has taken a Ford F150 and turned it into its version of the Roush Nightmare. It is quite an F150.
Advertisement

Long McArthur Ford is at it again. The dealership is known for taking Ford trucks, like the F150, and turning those trucks into something else. For example, they offer a vehicle called the Ranger Baja. It is as close to the Ranger Raptor, offered outside the U.S., as you can get. The Ford F150 package sets Long McArthur apart from other dealers, who do not go as far as the Kansas dealership does.

This time the dealer has taken a Ford F150 Lariat with the Luxury package and turned it into a truck that approaches the Roush Nightmare. The Roush Nightmare starts with a Ford F150 SuperCrew four-by-four model, powered by the Ford 5.0-liter V-8. Roush bolts on one of its R2650 superchargers and transforms the V-8-powered F150 into the Nightmare. The Nightmare cranks out 650 horsepower and 610 pounds-feet of torque. In on-track testing, the Nightmare runs from 0 to 60 in about 4.0-seconds, making it perhaps the fastest pickup on the market.

Long McArthur calls its version the LM650. It is a Lariat Edition four-by-four F150. The vital addition to the package is the Roush supercharger. The dealership bolts the supercharger onto a factory 5.0-liter V-8.

The supercharger isn’t the only upgrade added to the LM650. There are several significant upgrades that improve the truck’s looks and off-road performance. The enhancements include an LM650 body kit. The body kit consists of an upgraded front bumper with extra LED lighting and a high-flow hood scoop. There are also fender vents with LED lighting. Other enhancements include an enhanced tailgate cover and upgraded rear-wheel-well liners. The wheels are 20-inch Fuel Bead-Lock style off-road wheels with 35-inch BFGoodrich T/A KO2 all-terrain tires. The larger wheels and tires require the recalibration of the speedometer.

The LM650 upgrades also include a two-inch Roush suspension lift kit; Fox shocks to handle the lift kit; Roush active exhaust, and top stripes. The stripes extend from the front bumper to the rear of the truck. Stripes also are used on the folding bed cover, painted in the body color.

One thing to note, says the Ford Authority, is that the included bedliner is carpet. A carpet bedliner “may not be ideal for those who want to do a lot of hauling with the truck.”

Long McArthur Ford also makes the Ranger Baja which is as close to Europe's Ranger Raptor As Is Possible.

Tsingshan's Threat to Tesla: EV Maker Is In Battery Crosshairs
Tesla-Funded Research Reveals One of The Biggest Mysteries of EV Battery
END_OF_DOCUMENT_TOKEN_TO_BE_REPLACED