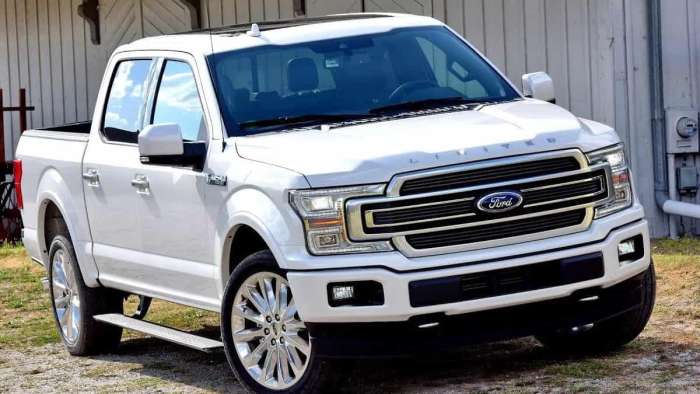 Here’s A Ford F150 Raptor Conversion To Drool For

With all of the options available to Ford F150 owners, is it any wonder that conversion firms all over are making Raptors out of Ford F150 Limiteds and more?
Advertisement

The Ford F150 is many things to many people. For example, if you have a job site where you need a powerful 4X4 machine, an F150, equipped with the 5.0-liter Coyote V-8, maybe a lift kit and aftermarket shocks, and beefier wheels and tires are the way to go. If, on the other hand, you never go off-road or mudding through a job site, then you can order a Ford F150 Platinum, equipped with the 3.5-liter EcoBoost V-6, and you can easily maneuver over the interstates and other major roadways in style and comfort.

What Does It Mean?

For some folks, the by the F150 Raptor, the automaker’s factory-built desert racer, typifies high-performance off-roading. Powered by a twin-turbo 3.5-liter EcoBoost V-6, the Raptor, which sports its seats and specialized interior, is right at home either mudding through the outback or going off-road on some tight paths. The Raptor’s 450-horsepower and 510 pounds-feet of torque is not only enough power to get to the head of any race pack but to also get out of any jam in which you might find yourself. Unless your Ford F150 Raptor either gets stuck deep in some very gooey, clingy mud or your pickup is hung up on a massive rocky outcrop that sticks up from track-bed, you should find that the Raptor’s power/torque combination will get you out of any situation.

With that said, though, enthusiasm for the Raptor is high, for the most part. There is a hardcore group of off-roaders who would like to see the Raptor powered by something more than the 3.5-liter, twin-turbo V-6, say the 5.0-liter Coyote V-8, the standard eight-cylinder mill for the Ford F150 line. Now, you might be able to do something about the power situation yourself, by ordering the right parts from various catalogs, but, truth be told, most people – even hard-core enthusiasts – don’t have the proper tools or time to put those parts together into anything approaching the Raptor, equipped with a V-8.

If, on the other hand, you ordered the Ford F150 Platinum edition and you had the right tools and the knowledge to use them, then you might stand a chance of completing a creditable Raptor-like clone. But, why would you need to do it – other than having the fun of putting your own Ford F150 Raptor clone – PaxPower will do it for you. Some guys live the dream and build their own Raptor clones.

The folks at PaxPower in Houston, Texas, base their V-8-powered version of the Raptor pickup on the Ford F150 Platinum edition, which sits just below the Limited on the luxury order list. You might wonder why PaxPower uses a Whipple blower on its version of the Raptor. The answer is straightforward, the amount of time until an engine spools up to power.

Usually, an EcoBoost Ford engine has enough plumbing under the hood to keep most people happy with the performance of their engines. That they could squeeze more power, even out of a V-6 with a supercharger rather than a turbocharger, seems not to have been considered.

Turbocharging is passive. It takes its power from the exhaust stream and recirculates it. Supercharging is an active technology. A secondary shaft takes its power directly from the engine’s crankshaft. The blower increases the density of the fuel-air charge going into the intake manifold instantly. It is an excellent concept. Almost immediately, though, critics found a bug – the supercharger robbed power from the engine, or so the critics claimed.

However, when you realize that the amount of power “robbed” from an engine amounts to no more than a handful of horsepower you can see the critics’ problem. Since supercharging delivered far more energy than it lost through its mechanical linkage, no one listened to the critics for long. Supercharging critics usually like turbocharging because they believe it uses “free” power that is lost out the manifold. Is this true? In a sense, it is true but let’s look a bit closer at it.

A turbocharger sits astride the input and exhaust manifolds. It samples and uses the power of the engine’s exhaust stream. The turbocharger has an impeller blade that is turned by the exhaust stream. Linked to it is a second impeller that sits in and drives the car’s fuel-air charge. The input-side impeller rotates rapidly and increases the density and pressure of the fuel-air charge, increasing the engine’s power output. Any Garrett – or other turbocharging – system works this way.

Here is the problem with turbocharging. Though the turbo power is “free,” that “freedom” comes at a price. Unless you keep the fuel-air charge relatively cool and dense, you lose much of the effect of the turbocharging. That’s why there has always been – and in some cases still is – “turbo lag.” It takes added plumbing to spin up the turbo, while also keeping the fuel-air charge dense.

Now if both of the concepts seem similar, you are right. They are. It depends on the side of the exhaust manifold. Supercharging is on the input side, using a small shaft driven by the crankshaft. Turbocharging, on the other hand, is known as turbo-supercharging and sits on both sides of the manifold and acts on both.

With this complication, why would PaxPower want to get into the conversion business? The answer is easy; in 2018, PaxPower wanted to be the first tuner to market a V-8 version of the next-gen Raptor. The reason they could even think of this is that Ford decided not to make a new Raptor.

The result was that PaxPower developed its all-OEM conversion V-8 Raptor for 2015 to 2020 Ford F150s. The result is the company can convert any 13th generation Ford F150 into Raptor spec, using all-new parts from Ford. Of course, the customer does have to supply the vehicle, though, if you don’t have a Ford F150 sitting in the driveway, PaxPower can help you obtain one.

For a base $25,000 price, the conversion vehicle you receive is very close to a Raptor. The critical difference is that its powerplant is the Ford 5.0-liter Coyote V-8, not the twin-turbo EcoBoost 3.5-liter V-6. Another key difference is the power output. The Raptor’s high-output turbocharged V-6 typically cranks out about 450 horsepower and 510 pounds-feet of torque. The PaxPower conversion turns out 750 horsepower, using a Whipple supercharging system. The price covers just about everything. There is second, upgrade available that brings the blower output to 758 horsepower. The second upgrade has a $12,500 price tag. There is also a diesel version of the Raptor available from PaxPower that ups the torque of the PowerStroke diesel to 550 pounds-feet of torque, a real stump-puller.

Here’s what you receive for the $25,000 PaxPower base package:

The conversion takes about three weeks. Practically every aspect of the build can be customized or upgraded. You can have upgrades wheels and tires, exhaust, aftermarket bumpers, LED lighting, and other performance upgrades. For example, the standard Fox coilover shocks are upgradeable to coilover shocks from King or Icon.

Tsingshan's Threat to Tesla: EV Maker Is In Battery Crosshairs
Tesla-Funded Research Reveals One of The Biggest Mysteries of EV Battery
END_OF_DOCUMENT_TOKEN_TO_BE_REPLACED