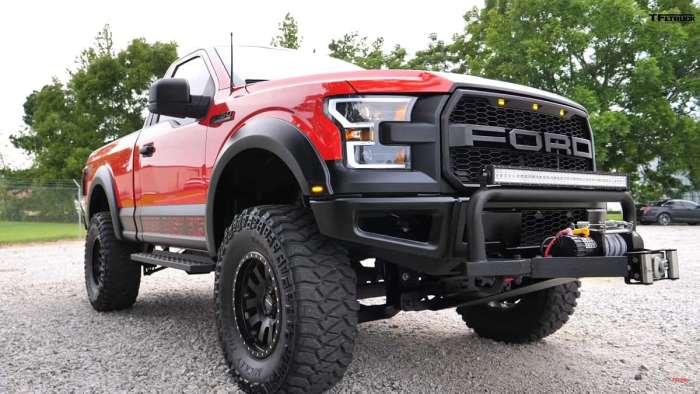 Although some have said they have seen a Ford Raptor two-doors in the public, it's highly unlikely because Ford doesn't do two-door models. Instead, they are SuperCabs or SuperCrew Cabs. A South Caroline tuner, though, has come up with a two-door that is almost all Blue Oval certified.
Advertisement

Here’s something that we bet you have never seen before, a Ford “Raptor” short bed with a standard cab. It’s true, even if you are checking all of the specialized websites in the world; the chances that you will find a standard or short-bed standard cab Raptor are about the same as you finding a chicken with a beak-full of choppers.

That is until you find a tuner like South Carolina’s Five Star Tuners. They have taken a factory-ordered short-bed, standard cab F150 and turned it into the closest thing you will find to a Raptor in the wild. Indeed, you won’t find a standard-cab Raptor in the wild because Ford doesn’t make them. You will find Raptors in SuperCrew and SuperCab configurations, but, for whatever the reasoning might be, Ford doesn’t make the standard-cab, short-bed style F150 you’ll find in this video.

Let’s look a bit more at the truck that Mike Butler’s shop has turned into a fire-breathing Raptor-like F-150. Mike and company started with, believe it or not, a factory-ordered short-bed, standard-cab F150. And, after looking at it, the fun began.

To get the hood as close to a Raptor’s as possible, the crew took a Raptor hood and took it apart. They also took apart the standard hood from an original F150, cleaned them up, and glued them together. When that had set, they trimmed the hood to fit the standard F150’s front end. Next, they added a custom bumper, and custom eight-inch winch that hangs out in front of the pickup’s front bumper. (You do have to watch that overhang, which Mike was quick to warn the review driver about.)

That level of boost meant that the unofficial, non-factory two-door Raptor puts about 720 horsepower to the rear wheels. To handle that much power, Five Star added a .456 rear so the Raptor-looking non-Raptor. The drivetrain did require recalibration, which Mike did use standard factory software. And, if you are looking for something to compare the power output to, think of a stump puller with a neat red body that also happens to look like a two-door Raptor and you’ll have a good idea.

Underneath the Five Star non-Raptor Raptor, the crew achieved the right look by adding a six-inch Rough Country lift kit. And, to keep things more comfortable and controlled, they also added a set of Vertex adjustable shocks. They have eight settings that allow you to set the suspension for power, handling, and comfort. Because of the lift kit and the 37-inch wheels, there is a tendency for the pickup to be a bit tippy front and rear. So, to keep things stable, the team added a set of track bars front and rear.

The result of all of this change and tweaking is a vehicle that handles the power quite naturally. Indeed, the reviewer from TFLTrucks found that it F150 handles like a longer vehicle, though he was startled when he opened things up a big and found the F150/supercharger/5.0-liter team the F150 surged ahead, taking him by surprise. One thing you will notice if you view the video of this vehicle is that there is a very sweet, yet powerful engine note.

There are two more things to note. On the interior, Mike and company replaced the stock bench seat with a set of aftermarket performance seats. And, they also added in a center console that they took from another vehicle. It seems quite natural. By the way, the red-paint coloring of the exterior is carried to the interior by the seats. A working Raptor steering wheel completed the interior. The wheel was real right down to the paddle shifters on either side of the wheel.

Finishing off the Five Star’s upgrade project was a unique tailgate. Mike took the graphic off a Raptor and glued it onto a custom rear gate. To complete the look, Mike used a Barricade rear bumper. Sitting in the short rear-bed, there’s a custom Chase tire rack that bolted into the F150’s body and frame. The rack ties right into the bed’s through-body bolts. The team completed the rack with custom light bars and other touches. It held the 37-inch spare nicely, ready to be used if needed.

When the dust settled, and the pickup was returned home for the day, the consensus was that if you were looking at a two-door, standard-cab F150 that was about as close to a Raptor in look and feel as there are out there, this is the pickup.

Read: 3 Reasons The Ford Raptor Is Worth the Price, or Is It?

And, oh yes, someone did say they saw a short-bed Raptor-style F150 in the wild. On further investigation, it turned out that the test mule used an F150 body, bolted onto a different vehicle for camouflage. It wasn’t a Raptor at all, though it did look real, it wasn’t. Five Star’s non-Raptor Raptor is the vehicle that will give you not only the look and feel of the Raptor, but also the ride, handling, and power.

Marc Stern can be followed and reach on Twitter at @iraradioguy

Jeff wrote on July 7, 2019 - 5:11am Permalink
This is far from a Raptor. It has a very cheap rough country suspension that rides rougher than the OEM F-150 ranchos