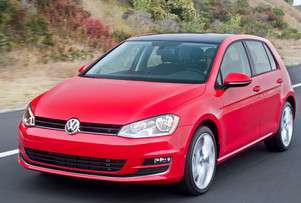 Good Housekeeping magazine has named the 2017 VW Golf GTI and best new car. The magazine worked with the staff at Car and Driver to winnow entrants down.
Advertisement

Volkswagen, which has had its share of discouraging news over the last few months, has some great news to share. The automaker’s Golf GTI has been named Good Housekeeping’s Best New Car for 2017.

“We are extremely proud that Good Housekeeping magazine has honored the Golf GTI with the 2017 Beest Newe Car Award. The Golf GTI packs incredible value. Its combination of power, design, space, connectivity and fun-to-drive nature represents the best of what Volkswagen has to offer,” said Hendrik Murth, senior vice president, product marketing and strategy, Volkswagen of America.

In awarding the GTI the honor, engineers from the Good Housekeeping Institute (GHI) Lab, working with the folks at Car and Driver, rated the GTI on its value, safety, handling, interior design, comfort and onboard technology. They put the Golf GTI through 1,200 grueling miles on test tracks and open roads. They made their decision based on the results of their testing.

GHI engineers had never tested “a more practical compact,” said Good Housekeeping. “The Golf won on combined miles per gallon and … top marks for visibility, a sleek, but roomy, interior and a tight suspension that helped it hug the road, even going over bumps.”

A fuel-injected 2.0-liter turbocharged four powers the Golf GTI. The engine uses direct injection, as well. Though it uses premium fuel, the GTI cranks out 210 horsepower and 258 pounds-feet of torque. When equipped with a six-speed manual transmission, the Golf GTI turns out 24 mpg in the city and 34 on the highway. When fitted with the optional six-speed double-clutch automatic, it’s mileage figures are 24 mpg city and 32 mpg highway.

Golf had some tough competition. GHI, working with Car and Driver’s auto experts, screened more than 100 new vehicles on the first cut. The investigators quickly narrowed down the list to the top 25 for a closer look. The Golf GTI Is among seven winners. In addition to the small category, others included luxury compact, sedan, luxury sedan, crossover SUV, electric and hybrid.