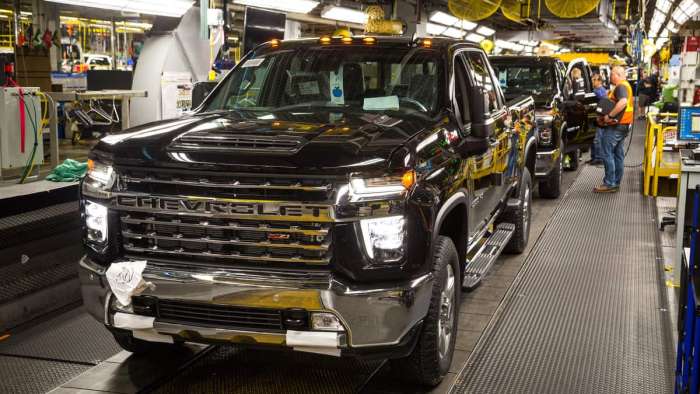 What GM's $150 Million Investment Will Get Them

General Motors is investing $150 million into its Flint Truck plant. How much will the huge investment help them?
Advertisement

General Motors has just started shipping its first 2020 Chevrolet Silverado HDs and GMC Sierra HDs to dealers this week, but it sees huge potential for growth in the heavy-duty segment. GM is so confident in the all new 2020 Silverados and Sierras that it is investing $150 million to build them faster.

The $150 million will buy GM the ability to build 40,000 more of the heavy-duty vehicles per year at the plant, which is already running at capacity.

It was less than two weeks ago that I reported that GM was spending $24 million to boost production at its Fort Wayne truck plant. That infusion of cash was to increase production of light-duty, full size trucks. This investment is much larger. According to GM, this will allow the truck plant to build 40,000 more Chevrolet and GMC HD pickups every year. They expect the early focus to be on building more of the popular crew cabs models. The plant will also be building more diesels. The expansion is expected to be finished in the first half of 2020.

“We have tremendous opportunities to grow our heavy-duty pickup business, because we’ve invested in capability, performance, innovation and capacity,” said Mark Reuss, GM president. “Our all-new Chevrolet and GMC HD pickups are the toughest, strongest, most capable heavy-duty pickups we’ve ever brought to market, and our Flint team is up to the challenge to build world-class quality products to drive the growth.”

General Motors has gotten a lot of bad press over its decision to close plants that have been producing cars and focus on primarily building trucks. About 2800 workers have lost jobs because of GM’s decision to idle the plants in Ohio and Canada. GM says it has job openings for virtually all of the workers who have been affected. GM is also boosting production of electric vehicles at its Orion Township plant in Michigan.

GM launched its all-new 2020 Chevrolet Silverado 1500 and GMC Sierra 1500 pickups last year. GM claims that “Combined sales of the all-new 2019 Chevrolet Silverado 1500 and GMC Sierra 1500 crew cab pickups, the highest volume model in the fiercely competitive full-size pickup segment, were up 20 percent in the first quarter of 2019 versus a year ago.” GM is also expecting another significant increase for the second quarter. Some have questioned that projected growth because the housing boom is slowing, but GM remains confident.

Dealers are expected to build their heavy-duty truck inventories to try and meet the pent-up demand.

Concerns About the Future
Flint Assembly opened in 1947, but it gained new life when it was transformed into a modern truck plant in 2013. GM already invested in new paint and body shop facilities. This latest addition will add new conveyors and tooling. General Motors is trying to balance the current demand for big trucks with the concerns about the future. President Mark Reuss has said that the company is working on an electric or electrified truck, but did not say if any of the production would happen at the Flint Assembly Plant.