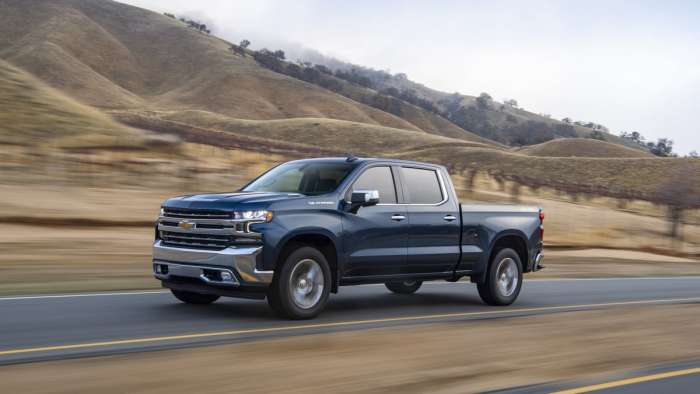 The 2020 Chevrolet Silverado's New Weapon in the Pickup Wars

Chevrolet is releasing more information about the all-new Duramax Turbo Diesel that will be featured in the 2020 Silverado. Chevy is promising a game changer with segment-leading torque and horsepower.
Advertisement

Chevrolet is promising that the 3.0L Duramax inline-six turbo diesel will be an engine worth waiting for. The automaker says the 2020 Chevrolet Silverado in-line six will deliver class-leading torque and horsepower while giving great fuel economy and capability in the full-size light duty truck segment. It is the first-ever inline-six turbo-diesel offered in Chevrolet’s full-size light-duty trucks.

Chevrolet still can’t tell us when you’ll be able to own one of the 2020 Silverados with the in-line six, the company is still waiting for the government to officially certify the all-new engine. Chevy had originally hoped to have the engine ready for some of the 2019 model Silverados but was forced to delay after the government shutdown earlier this year. A Chevrolet spokesperson told me late this afternoon, Chevy is prepared to start the diesel production right along with the other 2020 Silverado models as soon as the company gets the green light. According to Chevrolet, the 2020 Silverado will go into production, in Flint, Michigan, late this summer.

“From the moment the engine is started, to its idle, acceleration and highway cruising, the 3.0L Duramax performance will change perceptions of what a diesel engine can offer in refinement,” said Nicola Menarini, director for Diesel Truck Engine Program Execution. “With advanced technologies that draw on global diesel expertise, it’s a no-compromise choice for those who want the capability and driving range of a diesel in a light-duty truck.”

Chevy is releasing several new details about the in-line six.

It is rated at an SAE-certified 277 horsepower and 460 lb-ft of torque. It will deliver 95 percent of peak torque at 1,250 rpm. The diesel is paired with 10-speed automatic transmission. Chevrolet says that a special torque converter will give a smoother, more comfortable ride. It will also offer exhaust braking to help slow the vehicle so drivers won’t have to ride their brakes when in Tow and Haul Mode. The all-new diesel engine will feature ceramic glow plugs which will heat up more quickly and get hotter than traditional glow plugs. That will mean better starts in cold weather. The engine block heater shouldn’t be necessary until 22 degrees below 0 Fahrenheit.

Menarini says “The new Duramax 3.0L elevates the 2019 Silverado with one of the most refined and efficient diesel engines in the segment.”

One of the biggest complaints about diesel is the engine noise but Chevrolet says “Along with supporting elements such as a tuned air induction system and other noise-attenuating elements, the 3.0L Duramax delivers exceptional quietness and smoothness at all engine speeds.”

The all-new Duramax cylinder block is made of a cast aluminum alloy, so it has about 25 percent less mass than a cast iron engine block. It does use iron cylinder liners inside the aluminum block to improve durability.

The 2020 Silverado 1500 with the 3.0L Duramax inline-six turbo diesel will also have stop/start technology to improve overall fuel economy. The system shuts off the engine at stoplights and other stop-and-go situations to save fuel.

Fuel economy numbers will be released closer to actual production, after the engine is officially certified.

Billy wrote on June 6, 2019 - 11:35pm Permalink
Well, like most people on all the forum's, the mirrors are ugly and putting them down on the door made it worse yet. The grill on the one pictured looks like a Ford. The last thing Is go back and study the mid 90's body style, that was the best looking trucks gm ever made