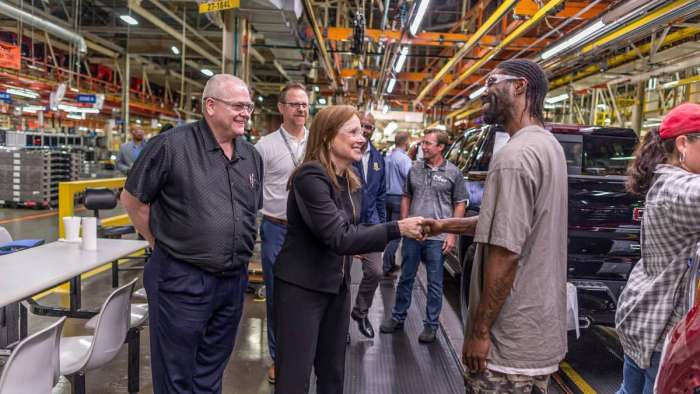 GM Increases Its Bet on Trucks

GM is investing $24 million to produce more trucks. We look at what is spurring the latest investment.
Advertisement

Pickup trucks like the Chevrolet Silverado 1500 and the GMC Sierra 1500 are so important to GM’s survival that Chairman and CEO Mary Barra was there when the company announced a huge investment in the Fort Wayne truck plant.

GM is investing $24 million to boost production of its full-size Chevrolet Silverados and GMC Sierras. GM says that it has invested more than $1.2 billion in the Fort Wayne Assembly plant since 2015.

“We are building Chevrolet and GMC crew cab pickups at record volume and mix levels to meet customer demand and the $24 million investment will allow us to build even more,” said Mary Barra, GM chairman and CEO. “The team here at Fort Wayne has done an outstanding job helping us satisfy customers throughout this launch. Our product ramp-up was very smooth and the quality has been exceptional. Crew cab sales have been very strong, and we are expanding customer choice with new models, more cab choices and innovative new powertrains.”

GM says that combined sales of the Chevy Silverado and GMC Sierra crew cabs are up 20 percent in the first quarter of 2019 versus 2018. GM expects the sales increase to continue for the second quarter.

Truck Wars
GM is locked in a heated battle with Ford and Ram for truck sales. All of the Detroit Three are betting heavily on trucks for the immediate future. The automakers have eliminated production of many of their sedans and focused their investments on truck production, electrification and self-driving technology. GM alone has idled 5 plants that were focused on sedan production. Trucks bring in significantly higher profits for the automakers.

The Ford F-Series has been the best-selling truck for decades, but Ram is also coming on strong after making significant upgrades. In recent years Ram has won numerous awards for design, interior and handling. Just today, Ram received another award.

This latest GM investment will be used to upgrade the plant’s conveyor system to increase production.