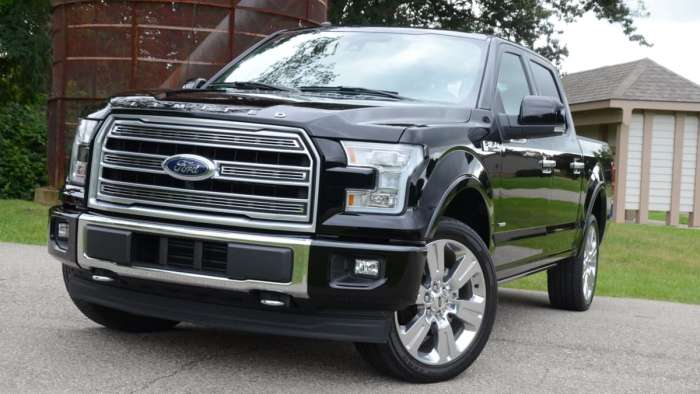 Critics claimed that the aluminum bodies of the modern Ford F-150 would lead to much higher repairs costs, but the new trucks actually cost less to repair.
Advertisement

When Ford Motor Company introduced the current generation of the F-150 with an aluminum body, many people in the industry were quick to criticize the shift to the lighter materials. These critics insisted that the aluminum wouldn’t hold up to normal use, that event little dent would turn into a caved-in body panel and that the higher cost of aluminum parts would make simple repairs more costly. It is almost as though some of the critics expected that Ford would be building trucks out of the same material that comprises beer cans; as though the Motor Company hadn’t done any research and development to see how these panels would do in the real world.

In fact, there were automotive publications who awarded other trucks over the F-150 because they were sure that it would cost substantially more to keep the aluminum Ford looking nice, but according to a report by Automotive News – all of those critics were wrong.

Aluminum F150 Had 7% Decline in Repair Costs
According to the Highway Loss Data Institute, an affiliate of the Insurance Institute for Highway Safety, the “collision claim severity” is 7% lower for the 2015 and 2016 Ford F-150 than it was for the steel-bodied 2014 F-150. The group cites the lowered cost of repairs for this 7% decline in claim severity, so based on that information, a given accident with a 2015+ F-150 is going to cost you about 7% less than it would if a 2014 F-150 was involved in the same accident.

It should be noted that the Highway Loss Data Institute has seen an increase in claims of 7% during the study of the 2015 and 2016 Ford F-150, so the overall impact on the insurance world has not changed. Insurance companies expected to incur far higher costs with the 2015+ F-150, but that is not the case at all. However, that bit of information matters far less to the average truck buyer than the fact that the aluminum body actually costs less to repair.

3 Reasons for Newer F-150s Cutting Costs
There are three key reasons why the 2015-and-newer F-150 with the aluminum body costs less to repair than the earlier steel-bodied trucks. The newer trucks take less time to repair, the technicians at dealerships (where most newer, wrecked vehicles are repaired) are specially trained to tear down and reassemble the trucks more efficiently and many of the most commonly-replaced body parts cost less now than they did when they were made of steel.

In designing the modern Ford F-150, the engineers put a great deal of effort into making the trucks easier to disassemble and piece back together. For example, changes to how the front fenders connect to the truck has shortened the time needed to replace them by 5-6 hours, and with technicians being specially trained to work on these new trucks, the overall labor costs are brought way down.

As for component costs, two of the most commonly-damaged body panels are the hood and the front bumper. The aluminum hood costs 43% less than the 2014 steel hood and the bumper costs 37% less than the similar unit for the 2014 F-150. Along similar lines, Ford offers some of the bumpers in chrome, which reduces the cost of prepping and painting a body-colored bumper.

The Automotive News report does point out that some items, such as the bedsides, do cost more (no number was given as to how much more), but in the long run, the aluminum-bodied Ford F-150 costs 7% less on average than the 2014 trucks with the steel bodies.

The bottom line here is that all of the critics of Ford’s move to aluminum body parts for their trucks, claiming that the aluminum was too flimsy and too costly, were completely wrong and as I predicted, the move to aluminum has only made the Ford F-150 a better truck.

Jeff wrote on May 29, 2019 - 2:30pm Permalink
Every manufacturer now seems like going aluminum. Ford was the first with the F150. Apparently it's paying off.
Matt wrote on May 29, 2019 - 10:20pm Permalink
Ford had to replace an entire panel most of the time if its torn. So yeah, its less labor than bonding the entire side of the F-150 truck. Drill out the rivets slap a new panel on. Rivet it on and prep for paint. That's mostly for bedsides. Rocker panels and pillars come as a complete side piece.