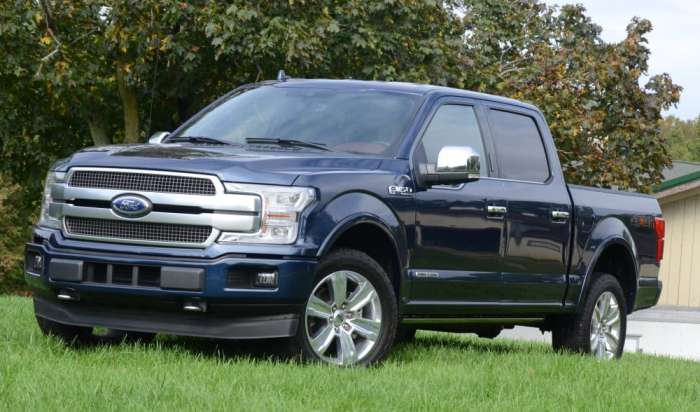 Ford F-Series Highlights Why American Automakers are Focusing on Trucks

Ford Motor Company sold 72,102 F-Series trucks last month, marking the ninth-straight month in which more than 70,000 full-size trucks have been sold and making it very clear why the American automakers are focusing on trucks and sport utility vehicles rather than small and mid-sized sedans.
Advertisement

Ford Motor Company, General Motors and FCA are all leaning away from small cars to focus on trucks and sport utility vehicles, and the F-Series pickup leads the examples of why this is a good move. Ford sold 72,102 full-sized trucks in November, marking the 9th-straight month in which the market’s bestselling vehicle has topped 70,000 units. Unfortunately, they will not top 1 million units this year (which I speculated was possible earlier this year), but they are likely going to finish up around 900,000 units.

Titan sales typically don’t follow the trends of the rest of the segment, but overall, the full-sized truck class is selling well and showing growth as the industry as a whole cools off after several years of big growth.

Top Cars are Declining
Over the course of the past decade, the two best-selling cars in the United States have been the Toyota Camry and the Honda Accord. The odds are good that they will be the best-selling cars in the US for 2018, but they are both down significantly over the first 11 months of 2017. The Camry is down about 4% on the year and the Accord is down 13%. Some people will point to the fact that after years of booming sales growth, the auto industry is beginning to level out and numbers are flat-to-declining across most segments including trucks, but when you put aside percentages and look at the big numbers, it makes sense to focus on trucks.

On the year, Toyota has sold 298,991 Camrys and Honda has sold 262,444 Accords. When you add those up, you get a total of 561,435. On the other hand, Ford has sold 821,558 F-Series trucks; 46% more units than Camrys and Accords combined. Mind you, that decline by the Camry and Accord is being felt across just about every “car segment”, and while many trucks and SUVs are down as well, they are still outperforming and out-selling the cars by a significant margin.

While critics will insist that this boom in truck and SUV sales while smaller, more efficient cars decline is a gross lack of foresight on the part of the American consumer, automakers are making the moves to build more of the vehicles that people are buying right now.