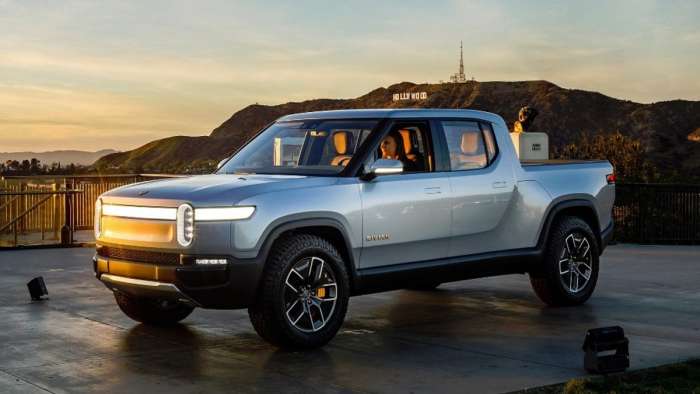 Rivian has been testing their electric truck chassis around Detroit disguised as Ford F-150 pickups, which may have attracted FoMoCo.
Advertisement

You may not be familiar with the Rivian name, but if the company’s plans for the next few years pan out, they could quickly rise to be the leader in the American electric vehicle segment. The Michigan-based startup has big plans to introduce an all-electric pickup and SUV in the next few years, but these aren’t going to be your typical, fragile EVs. Rivian is promising that their electric pickup will be able to go off-roading, haul heavy loads and do everything that a traditional truck can do with gasoline or diesel power, except the Rivian truck will do it strictly with electric power.

There is no question that the company has grand plans – the type of plans from other EV startups that we have seen fall apart in the past – but Rivian plans to work more with large automakers rather than working against them. As a result, the company wont just be relying on income from their vehicles, as they can also profit from selling their technology to larger companies.

Not surprisingly, after investment talks between General Motors and Rivian fell apart, Ford Motor Company has invested $500 million in the EV company, presumably to help produce an all-electric F-Series pickup. In fact, Rivian has already produced a number of electric F-150s for their own internal testing, which may have played a role in Ford’s interest in investing.

F-150 Test Trucks
Last year, there were a few Ford F-150 pickups spotted testing around Metro Detroit that some people believed were test electric drivetrain test vehicles. Later in the year, we learned that those were, indeed, electric F-150 pickups, but they weren’t from Ford Motor Company. They were Rivian test vehicles with Ford F-150 bodies.

Rivian’s vehicles use a “skateboard” architecture, with all of the key drivetrain components, suspension and every other part of the vehicle that is south of the body being incorporated into one nearly-universal package. Provided that the wheelbase is the right length, the company can put many different vehicles on their electric skateboard chassis, but for testing around Detroit, they picked the F-150.

The EV startup acquired some Ford pickups, removed the bodies and installed them on their electric skateboard chassis, allowing them to test their technology in the open world without anyone really knowing. That gave them a significant advantage in real-world testing without worrying about bothersome spy photographers poking around the vehicles, but it may have also played a key role in attracting Ford Motor Company and their investment money.

Working with Ford Trucks
Figure that Rivian could have picked Ram or GM trucks, but they picked Ford trucks. In theory, they did so because those bodies worked best for their testing needs, possibly offering the best fitment to the skateboard, coupled with a lightweight design and favorable aerodynamics. If Rivian felt that Ford trucks were the best bodies for their testing, then logic would dictate that of the available technology, the Rivian skateboard is at its best in the Ford bodies. With that in mind, when Ford management was considering an electric vehicle partner, picking a company that purchased Ford trucks for the best testing platform makes a great deal of sense.

Basically, Ford may not need to do as much testing or R&D to use the Rivian skateboard technology because Rivian has already done some of it themselves in their internal testing. In investing $500 million, Ford is securing a future partnership with the EV company, but going forward, the Motor Company may lend some help to Rivian as they continue to test with F-150 bodies. This could allow Ford to send Rivian specific truck bodies and configurations for testing, helping both companies while reducing overall costs.

In any case, this partnership with Ford Motor Company helps to secure the EV startup’s future, as it appears as though Rivian will be offering their own trucks in addition to providing technology for an electric Ford F-150.