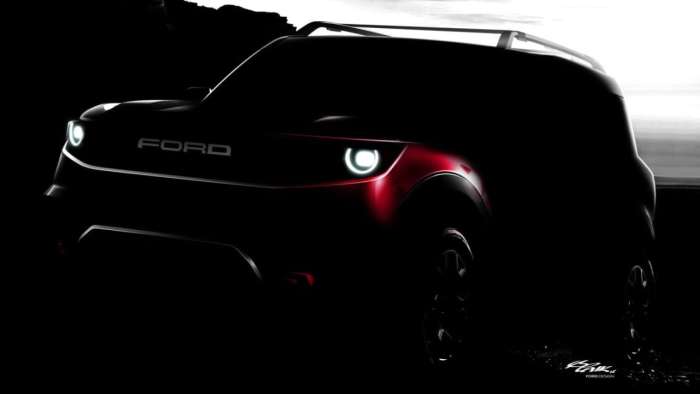 Ford Scout would be a Great Name for the Baby Bronco

Ford’s move to trademark the Scout and Bronco Scout name may be a key hint as to what the Motor Company will name their upcoming small SUV.
Advertisement

We have known for some time now that the Ford Bronco will soon return to the company lineup, but there will also be a similar-yet-smaller SUV that many people have been calling the “baby Bronco”. With the news that the Motor Company has applied for trademarks for the “Scout” and “Bronco Scout” names, perhaps Scout will be the name of the upcoming baby Bronco.

Some people consider this to be an odd move, as Scout was previously a model name of the now-defunct International Harvester consumer vehicle brand, but if you look past that, Ford Bronco Scout and Ford Scout both have a nice ring to them. More importantly, the name fits for a small, off-road-ready crossover that could compete with the likes of the Jeep Renegade.

The Scout
If Ford introduces a vehicle called the Scout, it will not be the first time that a sport utility vehicle with that name will have been offered in the US market. In the 1960s, 1970s and early 1980s, International Harvester offered the Scout as part of their consumer lineup. The Scout was a great deal like the older Ford Bronco or the Chevy Blazer, sporting a two-door, big-body SUV design with a removable rear roof and serious off-road credentials.

The Scout looked similar enough to the Bronco from that era that some folks who aren’t particularly well-versed on classic SUVs could easily mistake one for the other.

The fact that the Scout was a competing vehicle to the Bronco from another brand is the key knock against Ford using the name in the modern era, and it is a bit unusual, but the vast majority of potential buyers aren’t going to care about the International Scout.

What Is It?
The baby Bronco – which may or may not wear the Scout name – is expected to be a smallish unibody SUV that is designed to be a bit more rugged than the current small Ford SUVs. It should have an upright, almost boxy form that could mimic the Bronco, unlike the curvy crossovers like that Escape and Edge, but more importantly, the Scout should be far more capable than the Escape or Edge in off-road settings.

It seems that the new Bronco will take aim at the Jeep Wrangler, so it makes sense for the Scout to be a smaller, “gentler” off-road SUV that will go head-to-head with the Jeep Renegade.