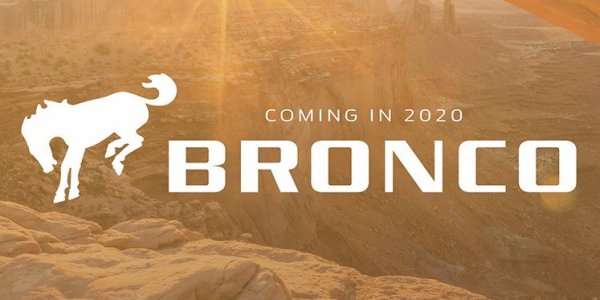 Early this morning, Ford Motor Company tweeted the image above, officially announcing the planned return of the Ford Bronco for 2020 and it will be an off-road ready, midsized vehicle rather than a full sized vehicle based on the F150 – exactly as we had predicted earlier this year.
Advertisement

When information hit the internet earlier this year that the Ford Bronco would return in the next 5 years and it would share a production facility with the new Ford Ranger, I speculated that this new Bronco would be a midsize, unibody SUV designed to compete with the likes of the Jeep Wrangler. This contradicted the hopes of many, who believed that the next Bronco would be a large, F150-based body-on-frame vehicle, so when I made my guess that it would be a smaller, unibody SUV – some people insisted that I was wrong.

Welp, based on the information announced today at the Detroit Auto Show by Ford boss Joe Hinrichs, my guesses were right.

The 2020 Ford Bronco Becomes Official
Speaking on stage at the 2017 North American International Auto Show, Ford’s President of the Americas Joe Hinrichs revealed the image above – showing the old school Ford Bronco logo and a picture of a rough landscape. He went on to explain that the new Bronco will be a midsized SUV designed for off-road excellence and, as we knew before, the 2020 Bronco will be built alongside the new unibody Ranger at the Michigan Assembly Plant in Detroit. Hinrichs called the 2020 Bronco a “no compromise midsize 4x4 utility for the thrill seekers who want freedom and off-road functionality with the space and versatility of an SUV. It's capable of conquering everything from your daily commute to gravel roads and boulders."

Unfortunately, that is the extent of the information offered on the 2020 Ford Bronco. While the company didn’t state that the Bronco and the new Ranger will be related (such as sharing a new platform), we know that the Ford Ranger will return for 2019 and it will also be a midsized vehicle – so I would guess that these two new vehicles will at least share a similar platform.

So, the bottom line is that the Ford Bronco will return for 2020. It will be built in Michigan alongside the new Ford Ranger and it will be a midsized 4x4 built for daily driving and weekend rock-crawling.

It sounds an awful lot to me like Ford is building a new Bronco to rival the Jeep Wrangler, but with this vehicle scheduled to arrive 3 years in the future - it could be quite some time before we get out first glimpse of this new smaller SUV.