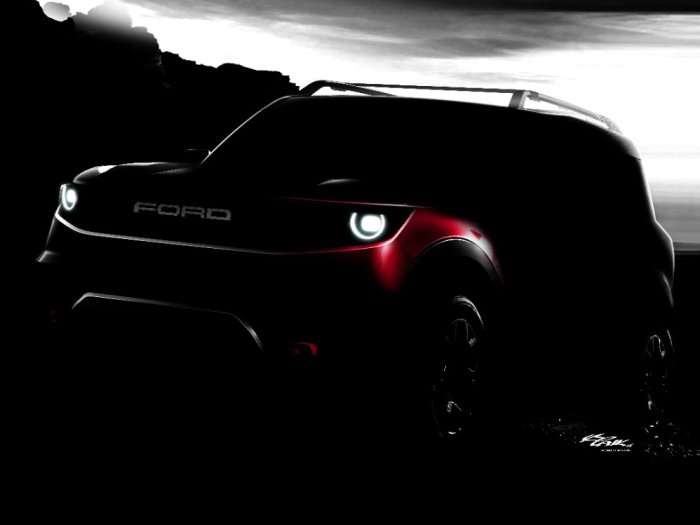 2020 Ford Bronco to be Joined by a Smaller, Unnamed Off-Road SUV

Ford Motor Company announced yesterday that the highly-anticipated 2020 Bronco will be joined by a second, smaller off-road sport utility vehicle that is currently unnamed – emphasizing the automaker’s dedication to SUVs and the purpose-built off-road segment.
Advertisement

We have known for more than a year that the Ford Bronco would be returning to the company’s lineup and it comes as little surprise that the Motor Company is planning more new SUVs, but it comes as a bit of a surprise that the new Bronco will be joined by a smaller off-road-ready sport ute. We don’t know anything about this smaller sibling to the 2020 Bronco beyond what we can see in the shadowy image above, but based on the current competition in that segment – we can make a few guesses as to what we can expect.

“Ford helped start the off-road phenomenon and has majored in off-road capability for decades – from the Bronco to the Raptor,” said Jim Farley, Ford president, Global Markets. “Now, we’re ready to reclaim our rightful place as the off-road vehicle leader.”

The Baby Bronco
To introduce this new smaller-than-the-Bronco SUV, Ford introduced the image above and the simple statement below:
“Ford also plans to drive growth with two all-new off-road models: the new Bronco and a yet-to-be-named off-road small utility – both designed to win a growing number of people who love getting away and spending time outdoors with their families and friends.”

That is the extent of the information on the smaller off-road SUV, but the picture above provides far more information on the vehicle that I will refer to as the “baby Bronco”. Maybe Ford will call it the new Bronco II (that seems unlikely due to the confusion created by having two vehicles with the Bronco name) or maybe the company will offer up an all-new name, but we know that it will be a smaller SUV than the Bronco with similar off-road credentials.

Figure that the 2020 Ford Bronco will compete in the mid-sized SUV segment, competing directly with the Jeep Wrangler. Unlike the mid-sized Ford Edge, the new Bronco will likely be more rugged, with a higher ride height, off-road rated tires and a unique exterior design.

The baby Bronco will likely share all of the key attributes that make for a great off-road SUV, but it will be smaller than the Bronco and the Jeep Wrangler. The most off-road-ready small SUV on the market today is the Jeep Renegade, which is sort of like a baby Wrangler. That is the vehicle with which the new, smaller Ford off-road SUV will compete when it arrives in a couple of years.

As we can see in the shadowy image above, the baby Bronco has similar boxy lines to the Bronco, with a Raptor-like “FORD” grille, projection headlights with LED trim rings, high-positioned wheel arches over off-road-ready tires and a relatively wide, low stance. In short, it will be similar to a Jeep Renegade in its basic design, except it will come from Ford. We can expect EcoBoost power and maybe the Motor Company will utilize the new small PowerStroke diesel engine as well, but the bottom line is that it will be smaller than the Bronco while offering the kind of off-road credentials needed to compete with the small Jeeps.

We don’t know when the new baby Bronco will arrive, but it will likely be in 2020 or 2021 – alongside or shortly after the new Bronco arrives.