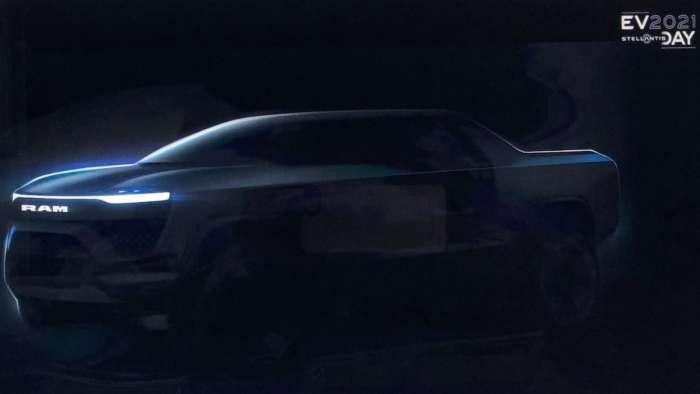 Ram’s parent company, Stellantis, is partnering with LG Energy Solution to build a lithium-ion battery plant in North America. Stellantis says the plant will have annual battery production capacity of 40 gigawatt hours and is scheduled to go into production in 2024. Ram has promised to build a battery electric Ram 1500 in 2024.

Stellantis says the batteries produced at the new plant will supply the Stellantis plants throughout the U.S., Canada and Mexico. The vehicles will range from plug-in hybrids to full battery electric vehicles. At this point, Stellantis isn’t saying exactly what vehicles will get these specific batteries, nor is it saying where the joint venture plant will be built.

“Today’s announcement is further proof that we are deploying our aggressive electrification road map and are following through on the commitments we made during our EV Day event in July,” said Carlos Tavares, CEO of Stellantis. “With this, we have now determined the next ‘gigafactory’ coming to the Stellantis portfolio to help us achieve a total minimum of 260 gigawatt hours of capacity by 2030. I want to warmly thank each person involved in this strategic project. Together, we will lead the industry with benchmark efficiencies and deliver electrified vehicles that ignite passion.”

“Establishing a joint venture with Stellantis will be a monumental milestone in our long-standing partnership,” said Jong-hyun Kim, President and CEO of LG Energy Solution. “LGES will position itself as a provider of battery solutions to our prospective customers in the region by utilizing our collective, unique technical skills and mass-producing capabilities.”

Currently, LG Energy Solution produces the lithium-ion battery pack used in the Chrysler Pacifica Hybrid minivan. That partnership was formed in 2014, and the Pacifica was the first hybrid minivan. Samsung currently provides the battery packs for the popular 2021 Jeep Wrangler 4xe and the new 2022 Jeep Grand Cherokee 4xe.

During its EV Day, Stellantis said it planned to invest more than $35 billion in electrification through 2025. Stellantis said there would be a battery-electric muscle car in the Dodge lineup in 2024 as well as an all-electric Ram 1500 in 2024. Jeep is already working on an all-electric vehicle that may be called the Magneto. There will also be an electric Chrysler.
According to the company’s statement, the new plant “will help power Stellantis’ goal of realizing more than 40% of its sales in the U.S. comprised of electrified vehicles by 2030.” Groundbreaking for the facility is expected by the second quarter of next year.

LG Energy Solution, based in South Korea, has been in the news a lot lately. It is also partnered with General Motors. Recently, GM announced that LG Energy would pay for nearly all of the cost to recall and repair every 2017-2022 Chevrolet Bolt because of defective battery cells. LG is also GM’s partner in the production of the new Ultium battery platform that will underpin future GM vehicles like the 2022 GMC HUMMER EV, 2023 Cadillac LYRIQ and 2024 GMC HUMMER EV SUV.

LG's New EV Battery Plant Is a Welcome News for Tesla
Tesla Giga Berlin's New Hurdle: It's Not Only the Gov't, but Now Tesla Itself
END_OF_DOCUMENT_TOKEN_TO_BE_REPLACED