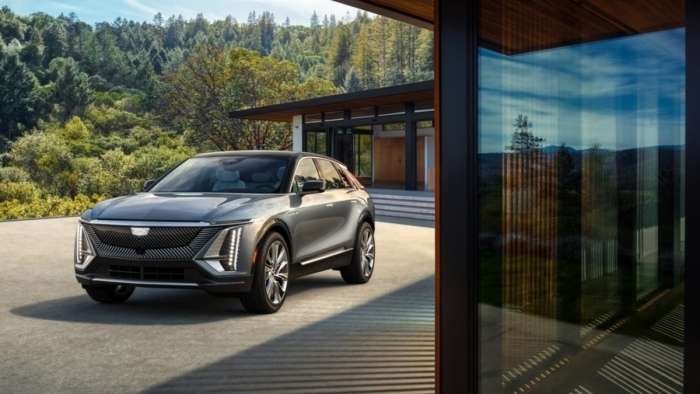 Cadillac is showing off the 2023 Cadillac LYRIQ EV and it is clear that the automaker is banking on the all-new SUV's success. We show you why the new EV is so important to Cadillac's future.
Advertisement

Cadillac is finally showing off the production version of its all-new 2023 Cadillac LYRIQ. Cadillac has a lot riding on its all-electric SUV, and says the vehicle heralds the brand’s all-electric future. Cadillac says that testing for the vehicle is running ahead of schedule and the LYRIQ should be available starting in the first half of 2022.

Cadillac LYRIQ Running Ahead of Schedule

Cadillac is so convinced that the LYRIQ will be ready next year that it will start taking reservations for it this September. The LYRIQ will be built on the same Ultium battery platform that underpins the 2022 GMC HUMMER EV and SUV, and the all-electric Chevrolet Silverado.

“Thanks to the modular and highly flexible Ultium Platform that powers LYRIQ, along with advanced virtual development tools, Cadillac has been able to accelerate development and put more real-world miles on prototypes sooner than expected,” said Jamie Brewer, LYRIQ chief engineer. “It’s exciting to see our objectives realized on the road — and it means we are on track to bring this pioneering electric luxury vehicle to customers nine months earlier than originally planned.”

In recent years, General Motors has used Cadillac showcase its latest technology. Likewise, Cadillac intends to use LYRIQ to highlight its all-electric future. Cadillac estimates that the new SUV will have the equivalent of 340 horsepower and an estimated range of over 300 miles. Most importantly, it will be luxurious but relatively affordable compared to its competition. Cadillac says that the LYRIQ will go on sale starting with a price of $59,990.

“Throughout the next decade, Cadillac will define the future of luxury transportation through a series of exciting new electric vehicles, and it all begins with LYRIQ,” said Rory Harvey, vice president, Global Cadillac. “The 2023 Cadillac LYRIQ’s stunning design and artfully integrated technology combined with GM’s Ultium Platform will deliver a high-performance luxury experience unlike anything that has come before it, setting a new standard for Cadillac.”

Cadillac is also counting on the LYRIQ to represent the future of GM’s overall production ability. The Cadillac LYRIQ will be built at the Springhill, Tennessee Assembly plant. GM is currently spending $2 billion to update the plant so it can produce electric vehicles. GM also recently announced a $2.3 billion plan to build a battery plant nearby in conjunction with LG Energy to support electric vehicle production. GM is already revamping the former Detroit-Hamtramck Assembly, now called Factory ZERO, to build the GMC HUMMERs and the electric Chevrolet Silverado.

LYRIQ will be equipped with quick-charging technology to help alleviate any concerns about range anxiety. It will also come with a dual level charging cord to make it easier for drivers to charge the vehicle in any situation. It will also feature the latest Super Cruise driver-assistance technology. It will have a 33-inch curved LED screen display.

The LYRIQ will be the new face of Cadillac and feature a distinctive black crystal grille. At first, the SUV will only be available in two colors: Satin Steel Metallic or Stellar Black Metallic.

“LYRIQ represents a clean-sheet design that sets the standard for the future of Cadillac,” said Andrew Smith, executive director of Cadillac Design. “The objective I gave my team was to design the LYRIQ with the level of detail that they would a show car. The customer should feel like they’re driving in the future.”

Even though the vehicle won’t be available until next year, Cadillac will launch an advertising campaign for it during the Oscars broadcast on April 25, 2021.

Cadillac desperately needs the 2023 LYRIQ to build excitement for the brand. It needs to convince younger buyers that it does represent luxury and that it can compete with the premium brands like the BMWs, Mercedes and Audis of the world. The luxury buyers haven’t signed on in huge numbers in recent years, hopefully, the promise of going all-electric will win them over.