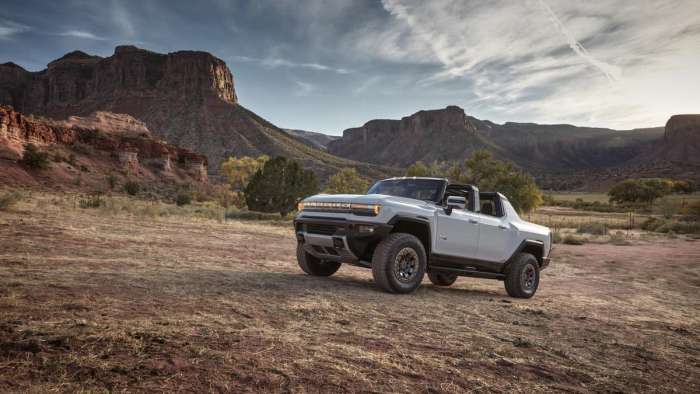 GM signed a huge deal to guarantee its supply of silicon carbide. Why the material is so important to GM's EV future.
Advertisement

General Motors is doubling down on its promise to go all electric. The auto giant entered into an agreement to switch to silicon carbide as an integral component in its battery systems. The silicon carbide will be used to extend the battery range in GM’s new Ultium battery platform. The 2022 GMC HUMMER EV will be GM’s first vehicle built on the Ultium platform. The 2023 Cadillac LYRIQ is scheduled to be next.

GM isn’t saying how much the new deal with Wolfspeed, Inc. is costing, only that it will provide a secure, long-term, domestically sourced supply of the material. According to GM, the silicon carbide will specifically be used in the integrated power electronics contained within GM’s Ultium Drive units in its next-generation EVs.

“Our agreement with Wolfspeed represents another step forward in our transition to an all-electric future,” said Shilpan Amin, GM vice president, Global Purchasing and Supply Chain. “Customers of EVs are looking for greater range, and we see silicon carbide as an essential material in the design of our power electronics to meet customer demand. Working with Wolfspeed will help ensure we can deliver on our vision of an all-electric future.”

“Our agreement with GM further demonstrates the automotive industry’s commitment to delivering innovative EV solutions to the market and using the latest advances in power management to improve overall vehicle performance,” said Gregg Lowe, CEO of Wolfspeed. “This agreement ensures long-term supply of silicon carbide to GM to help them deliver on their promise of an all-electric future.”

GM has promised to deliver 30 new electric vehicles by 2025. This year, the production of all vehicles has been slowed by shortages of semi-conductor chips. GM is making this move to make sure it won’t be crippled by a future shortage of silicon carbide. Silicon carbide helps makes batteries more efficient, producing better range or producing similar range in a smaller, lighter package. The added efficiency will benefit GM two ways, not only will they get more charge out of the battery, but if it is lighter, the vehicle will travel further on the same charge.

GM’s new Ultium platform is designed to be reconfigurable, so it can be used in vehicles of different sizes. GM has already announced that it will sell the Ultium technology and know-how to the aerospace and train industries for use in spacecraft and locomotives. Conserving space and making batteries lighter is especially important in the aerospace industry.

The silicon carbide power device solutions will be produced at Wolfspeed’s Mohawk Valley Fab in Marcy, New York, which is the world’s largest silicon carbide fabrication facility. The state-of-the-art facility is expected to open early next year. The new plant will expand Wolfspeed’s capacity for the company’s silicon carbide technologies, which are in increasing demand for EV production.