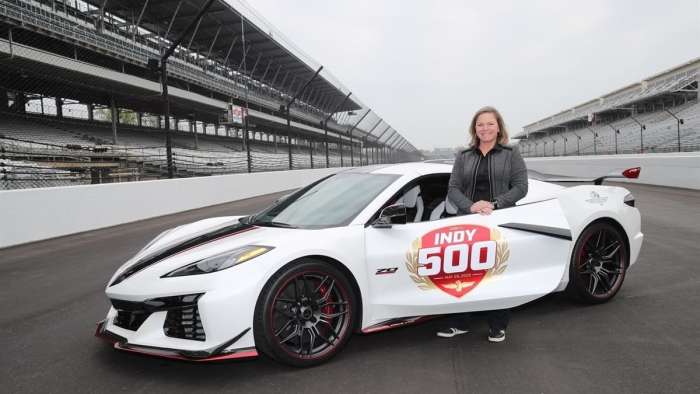 Sarah Fisher is the fastest woman ever at the IMS track and this year she will be setting the pace for the Indianapolis 500.
Advertisement

Sarah Fisher broke a number of records during her time as a race car driver. She remains the fastest female driver in Indianapolis 500 history. This weekend, Fisher will make history as the pace car driver, piloting the all-new 2023 Chevrolet Corvette Z06 70th Edition Pace Car.

Race fans should recognize her name. Sarah Fisher is a former IndyCar Series driver and team owner. She raced in the Indy 500 nine times between 2000 and 2010, which is the record for female drivers. According to track records, her fastest four-lap qualifying speed of 229.439 in 2002 remains an event record for a female driver.

Fisher also was the first woman to win the pole position for a major North American open-wheel event, for the INDYCAR SERIES race in 2002 at Kentucky Speedway. She also was the first female driver to earn a top-three finish in INDYCAR SERIES competition, placing third in 2000 at Kentucky Speedway and second in 2001 at Homestead-Miami Speedway. Sarah Fisher. After her driving career, Fisher turned to team ownership, providing two-time series champion Josef Newgarden with his first ride in the INDYCAR SERIES. She and her husband now run indoor Karting facilities in Indianapolis and Daytona, Florida. She has driven pace cars often, but this time it is in the all-new 2023 Chevrolet Corvette Z06.

“Every time I’ve had the opportunity to drive at Indianapolis Motor Speedway, it’s been special – from INDYCAR SERIES cars to two-seaters to vintage cars,” Fisher said. “Driving the Pace Car is just as special of an honor. And to have served in that role for the NTT INDYCAR SERIES since Johnny Rutherford retired, I’ve had many great memories to add to my career. “I am humbled and proud to become the official Pace Car driver for the 106th Indianapolis 500 and to represent the hard work and development that Chevrolet puts into these fantastic pieces of automobile advancement and technology.”

The 2023 Corvette Z06 is a race car that is built for the street. It is powered by the all-new 5.5L LT6 which kicks out 670 horsepower, making it the highest-horsepower naturally aspirated V-8 ever to hit the market in any production car. This year’s Pace Car is equipped with the available Z07 Performance Package, featuring a carbon fiber rear wing, aerodynamic ground effects and carbon ceramic brakes and for maximum track capability. The Z06 shares many components with the racing Corvettes. In honor of Corvette’s 70-year history, the Pace Car is a model year 2023 70th Anniversary Edition Z06. The special edition has White Pearl Tri-Coat Metallic paint and special 70th Edition interior and exterior badging.

“The Chevrolet Team is proud to pace the Indianapolis 500 for the 33rd time, while celebrating 70 years of Corvette,” said Steve Majoros, vice president of Chevrolet Marketing. “It’s only fitting the Indianapolis 500 will be the first race the 2023 Corvette Z06 paces, a truly special moment for Corvette and INDYCAR fans around the world.” Chevrolet and Corvette have led the starting field more than any other manufacturer and nameplate, respectively. The 2022 race marks the 33rd time for Chevrolet to pace dating back to 1948, and the 19th time since 1978 for America’s favorite sports car.

“Sarah Fisher is an Indianapolis 500 icon who always takes the time to appreciate her fans and represent the Indianapolis Motor Speedway and ‘The Greatest Spectacle in Racing’ with class and humility,” IMS President J. Douglas Boles said. “She is such a fitting person for this honor, and it will be such a thrill and privilege to see her lead the field of 33 cars to the green flag before a huge crowd at the track and a global television audience. “I’m sure Sarah will enjoy driving the 2023 Corvette Z06 70th Anniversary Edition, which is an incredible car with the performance to match its great looks.”

Blake Shelton, country music superstar, will serve as grand marshal of the 106th Indianapolis 500. As grand marshal, Shelton will give the traditional command for drivers to report to their cars during the official pre-race ceremonies and walk the Indy 500 red carpet.