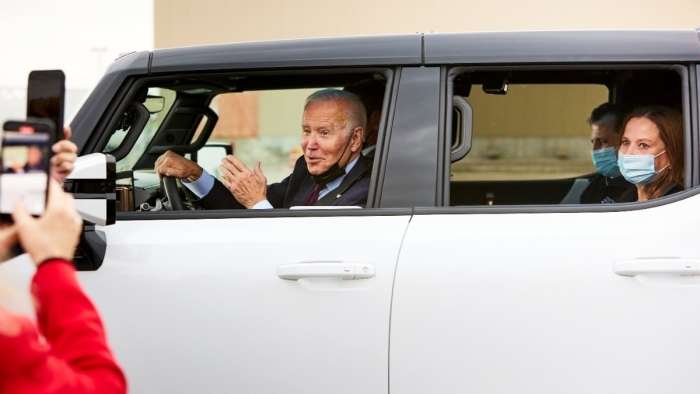 The President was in Detroit celebrating the passage of his infrastructure bill as GM unveiled its redesigned Factory ZERO.
Advertisement

It can’t hurt to have the President of the United States squeal the tires of GM’s all-new EV pickup. The President seemed impressed by the 2022 GMC HUMMER EV’s instantaneous torque. The Los Angeles Auto Show, which typically celebrates green technology, is also getting underway, but the President was in the heart of the Motor City celebrating the passage of the infrastructure bill and the future of electric vehicles.

General Motors was celebrating the Grand Opening of its plant renamed Factory ZERO. The old Detroit-Hamtramk Assembly Plant has been upgraded to build GM’s future electric vehicles on the Ultium battery platform. The plant is also expected to build the Chevrolet Silverado EV and the 2024 GMC HUMMER EV SUV. GM has spent $2.2 billion on redoing the facility which will eventually have 2,200 workers. This plant is used to building high-profile and innovative vehicles. It was where the Chevrolet Volt was initially built. The company is investing $35 billion in electric and autonomous vehicles and plans to introduce more than 30 EV models by 2025.

“GM’s U.S. manufacturing expertise is key to achieving our all-electric future,” said GM Chair and CEO Mary Barra. “This is a monumental day for the entire GM team. We retooled Factory ZERO with the best, most advanced technology in the world to build the highest quality electric vehicles for our customers.”

As part of his tour of the new Factory ZERO, the President toured the assembly line and drove the HUMMER out in the parking lot. GM Chair Mary Barra rode in the backseat. Following the event, Mary Barra said on Twitter, "It’s been an exciting day welcoming
@POTUS
to Factory ZERO. We were thrilled for him to experience the
@GMC
HUMMER EV pickup, and importantly, meet the outstanding manufacturing team at the heart of our operation."

The GMC supertruck has 1,000-horsepower and does 0-60 mph in approximately 3 seconds. The three electric motors planned for the HUMMER are expected to generate the 1,000 horsepower and up to 11,500 lb.-ft. of torque. The truck has an Adaptive Air Suspension so it can raise and lower the truck to adapt to virtually any terrain. It also has an Extract Mode to handle steep terrain and obstacles. A feature called Crab Walk allows the truck to travel sideways if necessary. The plant is already in pre-production of the trucks and deliveries should start before the end of the year.

Many had hoped that GM would offer a glimpse of the proposed Corvette EV often referred to as the E Ray. Biden is an ardent Corvette fan and spoke of the electric Corvette on a previous trip.

The new infrastructure bill includes $7.5 billion to install more EV charging stations nationwide. The poor charging infrastructure is often listed as the number one reason buyers are reluctant to choose an EV.

Video and Photo of the President's visit provided by General Motors.

loveawake.ru wrote on June 29, 2022 - 3:07am Permalink
Welcome to the world of adult Dating loveawake.ru