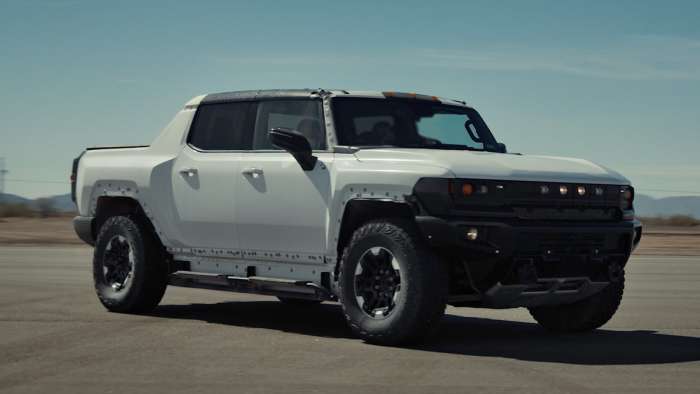 As the 2022 GMC HUMMER EV gets closer to launch, see the EV pickup do 0-60 in a remarkable time.
Advertisement

With the launch of the 2022 GMC HUMMER EV scheduled for later this year, GMC is celebrating the vehicle’s incredible power. GMC released a video of the 1,000-horsepower supertruck doing 0-60 mph in approximately 3 seconds. GMC calls the truck’s launch control mode Watts to Freedom or a rather racy WTF mode.

“Watts to Freedom unlocks the full potential of the propulsion system and puts all of its available power to the pavement,” said Al Oppenheiser, HUMMER EV chief engineer. “It’s an all-encompassing experience unlike anything else — purpose-built for straight-line fun.”

What the Video Shows

The test truck shown in the video lacks the decorative trim on the proposed production vehicles, but it demonstrates the truck’s special launch mode that the driver can select to create sudden bursts of power. The 2022 GMC HUMMER EV is scheduled to be the first vehicle built on GM’s all-new Ultium battery platform that can be reconfigured to support vehicles of different sizes and shapes. The three electric motors planned for the HUMMER are expected to generate the 1,000 horsepower and up to 11,500 lb.-ft. of torque.

The video suggests that the launch mode sets off special sounds and screen animations. The Adaptive Air Suspension readies the truck for high speeds by lowering it two inches, lowering the center of gravity and making the HUMMER more aerodynamic.

“It’s an amazing demonstration of just how fast 1,000 horsepower and 11,500 lb-ft of electric propulsion can move you,” said Oppenheiser. “It’ll put a smile on your face every single time.”

GMC has already released other videos showing the 2022 GMC HUMMER EV doing a variety of testing. One video showed the supertruck handling extremely rugged terrain. Several HUMMER EVs were taken to Moab to test the trucks’ Adaptive Air Suspension hardware. They were also testing its ability to use Extract Mode to handle steep terrain and obstacles. They were also checking how well the One-Pedal Driving functions as well as the e4WD and torque distribution, stability control and its fascinating Crab Walk ability.

The One-Pedal Driving function will allow the driver to accelerate and decelerate in low-speed off-road driving situations. It should help the driver in especially steep conditions so that the driver does not have to ride the brake and then accelerate.

GM recently announced that it will be exploring the possibility that the Ultium platform can be reconfigured to perhaps power train locomotives. The automaker is also experimenting with the possibility that Ultium and hydrogen fuel cells can be adapted to provide power for aircraft. GM is building several battery plants in a joint venture with LG Energy Solution.

Production of the 2022 GMC HUMMER EV will begin this fall at GM’s Factory ZERO. Formerly known as the Detroit-Hamtramck Assembly Center. GM has spent $2.2 billion retooling the plant to build only electric vehicles. Years ago, Chevrolet built the Chevy Volt hybrid electric vehicle at the plant. The D-Ham plant was probably best known for building Cadillac sedans.

For more information on the 2022 GMC HUMMER EV, check out www.gmc.com/HummerEV.