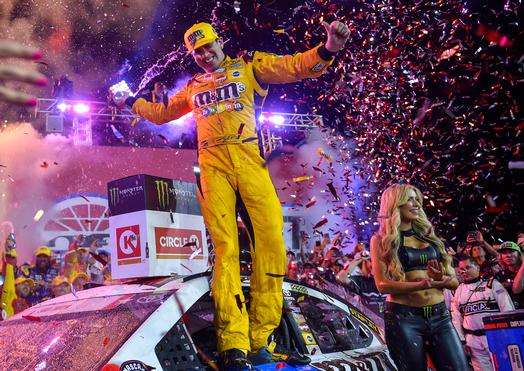 Kyle Busch sets NASCAR Record With Wins at Every Track

33-year-old Kyle Busch drove his #18 Toyota Camry into the record books. He has now won on every active NASCAR race track.
Advertisement

Kyle Busch drove his Toyota Camry into the record books with his win in the Coca-Cola 600, at Charlotte Motor Speedway. According to Toyota, by winning in Charlotte, Busch became the only driver to have won on each active NASCAR Cup Series track.

Busch’s win in the Coca-Cola 600 was impressive. He led 377 laps out of the 400, and won each of the race’s three stages. Sunday was a huge day for racing in both the Indy series and in NASCAR. Will Power won the Indianapolis 500 earlier in the day.

Kyle Busch admitted that this win was different. “This one’s very special,” said Busch. “The Coca-Cola 600, I’ve dreamt of this race since I was a kid and being able to win this race. It’s a little boy’s dreams come true and, man, I just want to say that I thank NASCAR, for one, for giving me a chance to come out here and have this opportunity to race for my dreams and to accomplish those things.

“I don’t know if it’s ever been done before, but the first one to check off all the tracks and get it all done,” said Busch of winning on his 23rd different track at the Cup level. “I don’t want to go to any new ones. That would just have to start the whole process over.”

NASCAR stands for the National Association for Stock Car Auto Racing. The name suggests that the vehicles on the track are stock, meaning they look and are outfitted like the vehicles you buy off dealer lots. They may look similar to car models with the same name but the race cars are highly engineered for the race tracks. NASCAR was founded in 1948, in Daytona Beach, Florida. The circuit has had a number of different sponsors over the years, like the Winston Cup and the Sprint Cup. Now it is the Monster Energy NASCAR Cup Series.

33-year-old Busch drives the #18 Toyota Camry for Joe Gibbs Racing. He is the younger brother of NASCAR driver Kurt Busch. As well as driving for JGR, Busch owns Kyle Busch Motorsports which races trucks in the Camping World Truck Series. Busch won the championship in 2015 when it was the NASCAR Sprint Cup Series.

The Coca-Cola 600 is the longest race in the series and is considered one of the ‘crown jewel’ events.

The Cup Series points leader also became just the 10th driver in Cup Series history to have led more than 15,000 laps on the race track.